Douglas is a city in Coffee County, Georgia, United States. The population was 10,639 at the 2000 census and 11,413 as of estimates conducted by the United States Census Bureau for a 12-month period ending 1 July 2008.[3] Douglas is the county seat of Coffee County[4] and the core city of the Douglas, Georgia Micropolitan Statistical Area which has a population of 48,708 as of the 2008 census estimates.[5]

Douglas was established in 1858 on 50 acres (200,000 m2) of land donated by J.S. Pearson at the confluence of Twenty Mile Creek and Seventeen Mile Creek. It was named for Senator Stephen A. Douglas, a renowned stump speaker and Congressman who was the presidential challenger to Abraham Lincoln in the Election of 1860. Douglas was chartered as a town in 1895 and as a city in 1897. In 1895, the railroad came to Douglas and the community began to boom.[6] In 1909, the Georgia and Florida Railway located its offices in Douglas. The Eleventh District Agricultural & Mechanical School was established in Douglas in 1906. In 1927, South Georgia College became Georgia's first state supported junior college. During the 1920s and 1930s, Douglas became one of the major tobacco markets in the state. Much of this history is depicted in the Heritage Station Museum, which is located in the old Georgia and Florida Railway train station on Ward Street in downtown Douglas.

Douglas has two areas listed on the National Register of Historic Places: downtown and Gaskin Avenue historic districts. They were added to the list in 1989.[7] 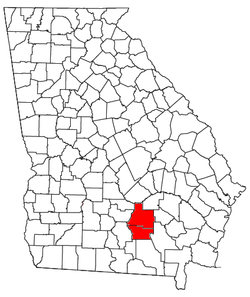 Location of the Douglas Micropolitan Statistical Area in Georgia

Douglas is the principal city of the Douglas Micropolitan Statistical Area, a micropolitan area that covers Atkinson and Coffee counties[9] and had a combined population of 45,022 at the 2000 census.[1]

There were 3,977 households out of which 32.5% had children under the age of 18 living with them, 41.3% were married couples living together, 21.3% had a female householder with no husband present, and 33.2% were non-families. 28.3% of all households were made up of individuals and 12.8% had someone living alone who was 65 years of age or older. The average household size was 2.57 and the average family size was 3.14.