The Alberta general election of 1913 was the third general election for the Province of Alberta, Canada. The writ was dropped on 25 March 1913 and election day was held 17 April 1913 to elect members of the Legislative Assembly of Alberta. Elections in two northern districts took place on 30 July 1913 to compensate for the remote location of the riding. The method to elect members was under the First Past the Post voting system with the exception of the Edmonton district which returned two members under a plurality block vote. The writ period for the general election was very short being 23 days.

This election was lead for the first time by Premier Arthur Sifton of the Alberta Liberal Party whom took over for Alexander Rutherford. Premier Rutherford resigned for his government's involvement in the Alberta and Great Waterways Railway Scandal but remained a sitting member. Sifton faced great criticism for calling the snap election, after ramming gerrymandered electoral boundaries through the legislature, running up the provincial debt and neglecting on promised railways. Labor candidates in this election allied with the Liberal government and not run under a labor banner.

Edward Michener the official opposition leader of the Conservative Party ended up capitalizing on anger toward the Sifton government. He would lead the largest opposition to date in Alberta history. The Liberals would win a comfortable majority of seats despite being almost even in the popular vote. The Socialist Party vote would collapse and lose their only seat as Charles M. O'Brien went down to defeat at the hands of a Conservative.

Events leading to the election

The writ of election was issued after a sitting of the house on the night of 25 March 1913. The premier dropped the election writ and dissolved the house after he ensured that the governments legislation on new electoral boundaries had been given Royal Assent. The new boundaries gave the Liberals an advantage, not only were they blatantly gerrymandered to their favour, but the opposition and even private citizens had a tough time figuring out what district they were in.

Day one of the campaign brought controversy as it was reported that Hotel organizers and Liquor establishments were being expected to donate generously to the Liberal campaign in order to get licence renewals for their establishments.

Arthur Sifton and his lieutenant Charles Cross both contested nominations in two electoral districts. It was reported in the Calgary Herald that were so scared of the electorate they felt they might not win if they faced just one district. The media accused Premier Sifton of having little confidence in his ability to return his government to power. The Liberal party in order to prevent possible vote splitting made deals with local trade unions and labour organizations to prevent candidates from running under the Labour banner.

The Conservative Party would protest the snap election by filing a legal injunction in the Supreme Court, to prevent the election from being held on 17 April 1913. The grounds for the injunction were based on the date of nomination closure being in violation of statue. The writs were issued with nomination day being 10 April 1913. The Conservatives argued that this was 10 hours short of the 16 full days prescribed in the Elections Ordinance, and the election should be ruled invalid.[1] 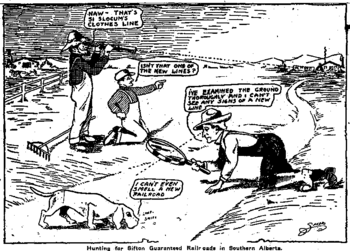 The big Issues of the election centred around the Sifton's government lack of infrastructure building in Southern Alberta.

The ballooning Alberta debt which in a few years had gone from 2 million dollars to 27 million was talked about often.

The Conservative and Socialist opposition vigorously opposed the bill, but failed to pass any amendments. The bill was jammed through third reading in the March 25 legislative sitting and given Royal Assent that evening, just shy of the writ of elections being dropped.

A ad that appeared in the Nanton News 10 April 1913 effectively highlights campaign issues, the ad was run by Conservative J.T. Cooper to attack his opponent Liberal John Glendenning

The Liberal campaign was dubbed "Siftonism" inferring that Sifton was a disease that needed to be cleaned from Alberta. The media at the time picked up on that, and roasted the Liberal party. The Conservative party attacked the Liberals on the Railway Scandal and Lack of provincial infrastructure.

The final result was Liberal Party, under its new leader, Arthur L. Sifton, won a third term in office, defeating Conservative Party, which was once again led by Edward Michener. The opposition gained the most picking up old districts, while the Liberals won mostly new ridings allowing them to hang on to a majority.

The popular vote reflected a different picture as the votes between the Conservatives and Liberals were split almost even with a difference of over 4,000 separating the two parties. The Socialist vote collapsed and they lost their only seat.

Members of the Legislative Assembly elected