Dan Voiculescu (n. 25 septembrie 1946) is a Romanian politician and former business man. He is the Vicepresident of the Romanian Senate and founding president of the Conservative Party in Romania. (ex Romanian Humanist Party).

Dan Voiculescu: “Personally, I divide my active life in 4 stages of work, each of them of approximately 10 years. In the first decade, in the 70’s, I worked for the state. Then, a same period of time, through the 80's , I worked for a boss. In the third decade, the 90's, I built my own business and became my own master. In the fourth stage, after the 2000's, I gave up managing my business and entered in the service of the people, through politics.”

Dan Voiculescu held the executive presidency of the party between 1991 and 2005. At present, starting December 2008, Dan Voiculescu is senator of the 8th Electoral Body in Bucharest, the capital city of Romania, and Vicepresident of the Romanian Senate. He is also member of the Economics, Industry & Services Permanent Comission and president of the friendship parliamentary group with the Republic of Austria. Previously, he served as senator between 2004 and 2007, but he resigned from the Parliament due to lack of support for the projects promoted by the Conservative Party. The projects referred to the extension of the tenants contracts from the nationalized buildings, the VAT reduction for alimentary products, the solidarity fund for pensioners and tax removal on the reinvested profit, legislation designed to bring more money to pensioners with low incomes, to lower prices on basic food or assist companies to reinvest their profits.[2].

As member of the Romanian Senate, Voiculescu has been strong in his opposition to Romanian President Traian Băsescu, who he states has exceeded constitutional boundaries and abused power.[3]

In April 2007, the Parliamentary Commission led by senator Dan Voiculescu, has managed, for the first time in the post-revolutionary Romania, the suspension of an acting president. The report drawn up by the "Voiculescu Commission" was adopted in the Romanian Parliament, with 322 votes "for" an 108 "against", president Traian Băsescu being suspended from his function.[4] However, at the national referendum that followed, Traian Basescu was reconfirmed in the president function.

Voiculescu’s Law : Voiculescu initiated a bill, named after him, that allows tenants of building that were nationalized during communism to stay in them, while the former owners receive only financial compensation. After a long legislative and constitutional battle, president Băsescu signed the law in 2009, even though he and his party oppose it. Emil Boc's government however did not apply it, and was sued by tenants' associations.[6]

The legislative proposal regarding the restitution of the trade-unions patrimony – a measure that will guarantee the independence of the trade-unions given the political pressures. Romania is the only state of the former communist block that has not adopted this measure yet.

The legislative proposal regarding the establishment of the national solidarity fund – the economic entities having a turnover greater than 1 milion Euros should pay a tax of 1% of their annual profit towards a fund meant to supplement the pensions lower that the minimum wage.

The legislative proposal regarding the compensation of VAT between the state and the traders – a measure through which bureaucracy and tax evasion are diminished and blockages determined by the delay of reimbursement of VAT are eliminated.

The legislative proposal on exemption of micro-companies from income tax in the first 3 years of their establishment – this will encourage private initiative and expenditures for social protection will be reducted.

The legislative proposal regarding the assurance of home attendance for the elderly people – measure designed for those old persons that can not take care of themselves and have nobody to rely on.

The legislative proposal regarding the growth of the 1st degree disabled pensions – the beneficiaries of this law, because of their severe disabilities, can not engage in any activity that could supplement their incomes.

The initiative proposal regarding the mortgage for the property investment – the initiative aims to protect those persons that have acquired a bank loan from the unjustified and unannounced changes in the interest rate.

The legislative proposal regarding the lowering of the VAT at 5% for the basic alimentary products: bread, meat, milk, oil, sugar.

The legislative proposal for supporting the birth rate growth – the project targets the granting of fiscal facilities (exemption from the payment of the wage tax, mortgage with interest fully subsidized) for the parents that have at least 3 children. 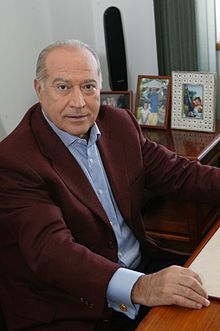 Dan Voiculescu is a Ph.D. professor. He taught the “Competition and Competitiveness” course for 7 years at the Academy of Economic Studies in Bucharest, within the Faculty of International Relations. Starting with 2003 he suspended his courses as a protest against the ease of granting the Ph.D. title to persons with a questionable character or professionalism.

Dan Voiculescu: “Working in foreign trade, from my 7 dolars/day subsistence, I managed along 21 years to save approximately 30.000 dolars. With this money I founded the GRIVCO group." The group had at start as main activity foreign trade. Very rapidly, Dan Voiculescu engages into media and launches a newspaper and the first commercial TV station in Romania, Antenna 1. “I am not making a secret out of the fact that the equipments were second-hand, the first typography as well, so I hadn’t started in a classical manner: a business-plan, a financing, the silly things spoken by some, tens of millions….” remembers Dan Voiculescu. Over time, the profits were reinvested and this was the base for the most powerful media trust with Romanian capital - Intact, part of the Grivco holding.

In 2001, Dan Voiculescu retired from his businesses. “I retired myself being a delighted parent on how my 2 daughters, Camelia and Corina, handle the business”, says Dan Voiculescu.

The foundation was established in 1990, with the mission to support, promote and encourage authentic Romanian values from various areas: economy, science and technique, education, culture, art. Among the programs of the foundation:

According to the autobiography published on the official website, Dan Voiculescu was born in a modest family, his father being a plumber and his mother a housewife. He grew up in the Bucharest neighborhood of Bariera Vergului, near the 23 August skating rink, where he practiced ice hockey. In 1969 he fulfilled the military service in a military unit in Focsani. His wife was Zsófia Égető, of Hungarian ethnicity, born from parents originating from the Covasna county that moved to Bucharest in the early 1940. Égető Zsófia was born in 1948 and attended the courses of the Academy of Economic Studies, where Dan Voiculescu was also a student. In the early 2000s, after 30 years of matrimony, Dan Voiculescu became a widower. He has 2 daughters, Camelia and Corina, and 4 grandchildren: Dan Guenther, Mara, Evelyn and Danut. At present, he is engaged in a stable relationship with Liana Voiculescu.

Romania's National Council for the Study of the Secret Police Archives (CNSAS) revealed that Dan Voiculescu acted as an informer for the Secret Police of the Nicolae Ceausescu regime by the names of "Felix" and "Mircea".[7] [8] Voiculescu denies, however, having been an official collaborator (with a signed agreement) or an officer of the Secret Police and is appealing the CNSAS' ruling to that effect. He blamed the initial findings against him on president Traian Băsescu, who, according to Voiculescu, launched a campaign to undermine him. [9] Tom Gallagher wrote in a 2004 paper [10] that it is supposed that Dan Voiculescu held the rank of General within the intelligence service before Romania's 1989 anti-communist revolution, but nothing has been proved till now. Ziua newspaper commented however that if Voiculescu was a "covert general" this fact would be extremely hard to prove; official records show that Voiculescu was a reserve army sub-lieutenant.

Dan Voiculescu disputed CNSAS’s verdict by legal means and addressed to the Constitutional Court in Romania. The Court decided that the law for the CNSAS’s function is unconstitutional.[11]

Before 1989 he worked in the foreign trade, leading in the 1980s the company Crescent, which had a special relationship with the Secret Police, specifically with the "Danube" Foreign Trade Enterprise, led by Colonel Constantin Gavril. People talked that the Crescent company, a Romanian-Cypriot joint venture, would have been a front by means of which Ceausescu managed to take money out from the country into a secret account. In 1990, a group of Canadian experts employed by the Romanian Government to track down Ceausescu's money, had proposed the arrest of Dan Voiculescu, but their investigations have been terminated unjustifiably. The Parliament has adopted on October 14, 2008, the report of the Parliamentary Commission of Inquiry for investigations and clarifications on the accounts of Nicolae Ceauşescu, the final conclusion being that the former head of state did not have any accounts or wealth deposited abroad. [12] "In two years of activity, we have invited various people who were part of the state system then, BCRE people, journalists who have dealt with this issue. In fact, the report’s full contents include the testimonies of these people. The conclusions are based on these testimonies. The overall conclusion of all people heard was that Nicolae Ceauşescu had no accounts abroad", said the Chairman of the Commission of Inquiry, Senator Sabin Cutas to Mediafax.

The Romanian National Anti-corruption Department (DNA) announced on April 3, 2007, that it was investigating Voiculescu, his daughter, and several business associates for money laundering, with regard to funds obtained through the national lottery. Voiculescu denied the charges, claiming the investigation was politically motivated and that the transactions were legal.[13]

Voiculescu has been accused of other corruption scandals, including an alleged scheme whereby Grivco bought electrical energy from the state-controlled Rovinari complex, and sold the energy back to Electrica, another state-controlled company, at a large profit.[14][15] Through a spokesman, Voiculescu declined to comment, on the grounds that in December 2004, at the time the contract was signed, he was just a shareholder, and not an administrator of Grivco.[14]

On October 2009, following some articles in the press [16], the Vice-President of the Romanian Senate, Dan Voiculescu, has undergone a vetting process carried out by the National Agency for Fiscal Administration (ANAF) [17], verification based on which ANAF has established [18] that the allegations surrounding the Senator Dan Voiculescu have no real basis.