Dil Chahta Hai (Hindī: दिल चाहता है, English: The Heart Desires, but billed as Do Your Thing) is a 2001 Indian film starring Aamir Khan, Saif Ali Khan, Akshaye Khanna, Preity Zinta, Sonali Kulkarni, and Dimple Kapadia. The first film written and directed by Farhan Akhtar, it is set in modern-day urban Mumbai and focuses on a major period of transition in the lives of three young friends.

The film was critically acclaimed, winning that year's National Film Award for Best Feature Film in Hindi. It was also a moderate commercial success doing average business,[2] though it performed better in the urban areas of the country compared to the rural areas, which was attributed by critics to the city-oriented lifestyle depicted in the movie in which all the characters are, without exception, from rich or upper-middle-class families.[3]

The movie is based on writer-director Farhan Akhtar's diaries on his trips to Goa, his 1996 month-and-a-half long stay at New York, and a storyline narrated to him by a friend.[4] It tells the story of three friends graduating from college and transitioning into life as adults. Each individual has a different perspective of life and love in particular.

Akash (Aamir Khan) does not believe in love, so he does not keep girlfriends for more than two weeks. Sameer (Saif Ali Khan) is a genial, well-meaning, desperately romantic but confused guy who is prone to romantic infatuations and believes to have found true love whenever he gets attracted to a girl. Siddharth (Akshaye Khanna), or Sid, an artist by profession and the most mature of the three, is not interested in trivial romances and is dedicated to his work. 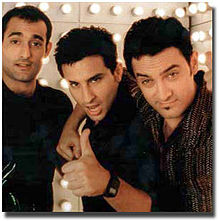 Akash, who is not only a cad in his personal life (breaking hearts, proposing to a girl named Shalini (Preity Zinta) in jest) but also a mischief-maker in his friends' lives, craftily engineers a breakup between Sameer and his girlfriend. He then plans a vacation trip to the beaches of Goa.

Sameer predictably "falls in love" in Goa with a pretty Swiss girl, a story that ends in disaster. He returns home to find that his parents have arranged a meeting with a potential marriage prospect. He resists at first as he does not want an arranged marriage, but the moment he sees the girl, Pooja (Sonali Kulkarni), he realises that she is 'the one'. Unfortunately, she is already in a relationship with someone else and Sameer has to be content with just being her friend.

Sid, in the meantime, befriends and eventually falls in love with Tara (Dimple Kapadia), an older divorcee and alcoholic, who had moved into a nearby house and shares his love for art. He decides to keep it from her, suppressing all hopes of a relationship as he knows that she, like most other people in society, would consider this scandalous. When his family and friends start finding out, everything goes wrong. Sid's mother is horrified and wrongly accuses Tara of having led Sid on. Akash makes fun of Sid's true intentions and his offensive remarks create a rift in their friendship. Tara hears that Sid has quarrelled with friends and family because of her and feeling that she has ruined his life, refuses to see him.

Akash, on the other hand, is also experiencing romantic upheaval. His parents send him to Sydney, Australia to work for the family business. On the flight, he meets Shalini again. He apologises for his earlier prank and asks her to show him around the new city. Even though Shalini is engaged to marry someone else, she finds herself agreeing and they both, eventually, start to feel a certain "something". She tries to find out how he feels, but he holds back. She then leaves for India to marry Rohit, her fiancé. Akash lets her go, then realizes that he can't live without her and returns to India to win her back. He proposes to her a day before her wedding and she accepts with the blessing of Rohit's parents. Rohit tries to resist but is helpless with his parents' decision and Shalini's true love for Akash.

Meanwhile, Sameer and Pooja start going out after she breaks up with her boyfriend, and Sameer plans on proposing marriage soon.

Tara is hospitalized with liver cirrhosis and dies with Sid at her bedside. Sid and Akash reconcile (with a little help from Sameer) and two years after their first Goa trip, the three friends regroup in Goa where Sid meets Priya (the girl that loved Akash). They share a smile and Sid realises that life goes on.

Farhan Akhtar began work on the film's script in 1998; the relationship of the characters Akash and Shalini was based on a similar experience of one of Akhtar's friends.[5] Other parts of the film were adapted from Shakespeare's Much Ado About Nothing.[6] Aamir Khan was initially offered the role of Sid, but he elected to play the role of Akash, for which he grew a soul patch. Abhishek Bachchan was also offered the role of Sid in the film. After he turned it down, Akshaye Khanna accepted the part. Akhtar convinced actress Dimple Kapadia to come out of retirement to play the role of divorcée Tara Jaiswal. After 15 months of extensive pre-production, the film was shot over a four month period in Mumbai and Sydney, Australia.[5]

The film's style extended to the music and its picturisation in the movie. One song sequence recapitulates, and to some extent, parodies Bollywood song-and-dance history. Other songs drop the usual dance accompaniment — one song depicts an argument between two protagonists through the song's lyrics, another establishes the character's state of mind through a moody photo collage, while yet another imagines the beautiful and idealised world of an artist in love through a song inside a painting. There is also an extended opera sequence at the Sydney Opera House, which was exclusively commissioned for the film.[5]

The film received praise from critics for portraying contemporary Indian youth as cosmopolitan and urban. The characters are depicted as upper-class with lavish houses and designer clothes. They attend art exhibitions and performances of Western opera, and travel overseas as a matter of course. Some critics opined that the film did not perform well in the non-urban areas because the lifestyle depicted in the movie was too city-oriented.[3]

The film had a below average start at the box office but picked up slightly due to word of the mouth and was rated an average grosser by Boxoffice India. It became the eighth-highest grossing Bollywood film of the year 2001.[2]

The awards won are highlighted in bold.