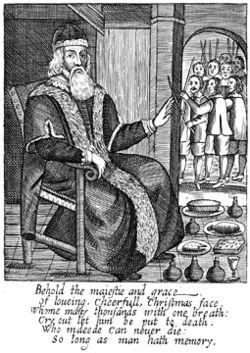 Excerpt from Josiah King's The Examination and Tryal of Father Christmas (1686), published shortly after Christmas was reinstated as a holy day in England.

Father Christmas typified the spirit of good cheer at Christmas, but was neither a gift bringer nor particularly associated with children.[citation needed] A traditional figure in English folklore, Father Christmas is identified with the old belief in the Old English god Woden.[1][2][3][4][5][6][7][8][9][10]

In parts of Europe, Father Christmas/Santa Claus is often said to reside in the mountains of Korvatunturi in Lapland, Finland, or sometimes at the North Pole.[citation needed]

The earliest English examples of the personification of Christmas are apparently those in carols of the 15th century.[citation needed] The manuscript Bodelian Library MS Arch. Selden b. 26, which dates from circa 1458 AD,[11] contains an anonymous Christmas carol (f. 8) which begins with the lyrics:

Goday, Sire Christëmas, our king,
for ev'ry man, both old and ying,
is glad and blithe of your coming;
Goday!

I am here, Sire Christësmas.

Welcome, my lord, Sire Christëmas!
Welcome to us all, both more and less!
Come near, Nowell.

Both songs then proceed to proclaim the birth of Christ in the present tense and elaborate upon the story of the nativity as occasion for rejoicing. The specific depiction of Christmas as a merry old man begins in the early 17th century, in the context of resistance to Puritan criticism of observation of the Christmas feast.[citation needed] He is "old" because of the antiquity of the feast itself, which its defenders saw as a good old Christian custom that should be kept. Allegory was popular at the time, and so "old Christmas" was given a voice to protest his exclusion, along with the form of a rambunctious, jolly old man. The earliest such was that in Ben Jonson's creation in Christmas his Masque[13] dating from December 1616, in which Christmas appears "attir'd in round Hose, long Stockings, a close Doublet, a high crownd Hat with a Broach, a long thin beard, a Truncheon, little Ruffes, white shoes, his Scarffes, and Garters tyed crosse", and announces "Why Gentlemen, doe you know what you doe? ha! would you ha'kept me out? Christmas, old Christmas?" Later, in a masque by Thomas Nabbes, The Springs Glorie produced in 1638, "Christmas" appears as "an old reverend gentleman in furred gown and cap".[citation needed] The character continued to appear over the next 250 years, appearing as Sir Christmas, Lord Christmas, or Father Christmas, the last becoming the most common.[citation needed] A book dating from the time of the Commonwealth, The Vindication of CHRISTMAS or, His Twelve Yeares' Observations upon the Times (London, 1652),[14] involved "Old Christmas" advocating a merry, alcoholic Christmas and casting aspersions on the charitable motives of the ruling Puritans. Father Christmas dates back at least as far as the 17th century in Britain,[citation needed] and pictures of him survive from that era, portraying him as a well-nourished bearded man dressed in a long green fur-lined robe. A writer in "Time's Telescope" (1822) states that in Yorkshire at eight o'clock on Christmas Eve the bells greet "Old Father Christmas" with a merry peal, the children parade the streets with drums, trumpets, bells, (or in their absence, with the poker and shovel, taken from their humble cottage fire), the yule candle is lighted, and; "High on the cheerful fire. Is blazing seen th' enormous Christmas brand."[15] Since the Victorian era,[citation needed] Father Christmas has gradually merged with the pre-modern gift giver St Nicholas (Dutch Sinterklaas, hence Santa Claus) and associated folklore. Nowadays he is often called Santa Claus but also often referred to in Britain as Father Christmas: the two names are synonyms. In Europe, Father Christmas/Santa Claus is often said to reside in the mountains of Korvatunturi in Lapland Province, Finland. Traditionally,[when?] Father Christmas comes down the chimney to put presents under the Christmas tree or in children's rooms, in their stockings. Some families leave a glass of sherry or mulled wine, mince pies, biscuits, or chocolate and a carrot for his reindeer near the stocking(s) as a present for him. In modern homes without chimneys he uses alternative 21st century electronic devices to enter the home. In some homes children write Christmas lists (of wished-for presents) and send them up the chimney or post them. 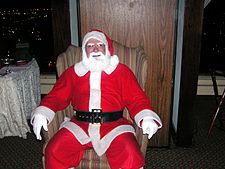 Father Christmas often appears as a large man, often around 70 years old. He is dressed in a red or green snowsuit trimmed with white fur, often girdled with a wide black belt (in the case of Santa Claus variations), a matching hat, often long and floppy in nature (also in the case of Santa Claus variations), and dark hobnail-style jackboots. Often he carries a large brown sack filled with toys on his back (rarely, images of him have a beard but with no moustache). Urban myth [16] has it that the red suit only appeared after the Coca Cola company started an advertising campaign depicting a red suited Father Christmas in the 1930s. However, the company themselves admit that the red suit had appeared before they used the image themselves. In reality, the red-suited Santa was created by Thomas Nast.[citation needed]

The J.R.R. Tolkien Encyclopedia compares Tolkien's Father Christmas with L. Frank Baum's Santa Claus, as he appears in The Life and Adventures of Santa Claus:

Santa Claus's friends raise an army to save him from monsters called Awgwas. Tolkien's goblins somewhat resemble the Awgwas, who also steal presents. But Baum's Santa does not fight like Tolkien's Father Christmas does.[17]

C.S. Lewis, a children's author and Christian, preferred the traditional Father Christmas because of his clear connection with the Christian holiday of Christmas.[citation needed]