Macon is a city located in central Georgia, USA. It is among the largest metropolitan areas in Georgia, and the county seat of Bibb County. A small portion of the city extends into Jones County. It lies near the geographic center of Georgia, approximately 85 miles (136 km) south of Atlanta, hence the city's nickname as the "Heart of Georgia". As of the 2000 census, Macon had a population of 97,606; [ [http://factfinder.census.gov/servlet/SAFFPopulation?_event=ChangeGeoContext&geo_id=16000US1349000&_geoContext=&_street=&_county=macon&_cityTown=macon&_state=04000US13&_zip=&_lang=en&_sse=on&ActiveGeoDiv=&_useEV=&pctxt=fph&pgsl=010&_submenuId=population_0&ds_name=null&_ci_nbr=null&qr_name=null&reg=null%3Anull&_keyword=&_industry= U.S. Census Bureau Population Finder] ] as of 2007, the Macon, GA Metropolitan Statistical Area had an estimated population of 229,846 and the Macon-Warner Robins-Fort Valley Combined Statistical Area had an estimated population of 386,534. [ [http://www.census.gov/population/www/estimates/metropop/2005/cbsa-06-fmt.xls Annual Estimates of the Population of Combined Statistical Areas: to ] (Note: This is a -formatted file)] Macon is the sixth-largest city (by population), fifth largest , and third-largest in Georgia, behind Atlanta and Augusta. Macon-Warner Robins-Fort Valley, GA Combined Statistical Area (CSA) includes 13 Georgia counties.

, a major employer, is south of the city in . The area is also home to several institutions of higher education, as well as numerous museums and tourism sites. The area is served by the and the Herbert Smart Downtown Airport. The current of Macon is , a former Democratic member of the . Perhaps its most colorful mayor with national recognition was Ronnie Thompson, who served from - and was the first of thus far two Republicans to have held the position, the other being (-).

were cultivated by the Creeks, who built temple and funeral mounds that survive today.

Prior to its establishment as a city, Macon was the site of . After the Creeks ceded their lands east of the , President ordered the fort built in 1806 on the of the Ocmulgee River to protect the new frontier, as it was a major military distribution point during the and the of 1813. Afterward, the fort became a trading post for a few more years before it fell to disuse. A replica of the fort, however, stands today on a hill in east Macon. By this time, many settlers had already begun to move into the area and later renamed Fort Hawkins “Newtown.” After the establishment of Bibb County in 1822, the city was chartered as the county seat in 1823 and officially named Macon, in honor of North Carolina statesman because many of the city's early settlers hailed from North Carolina. The city planners of Macon envisioned "a city within a park" and went about creating a city of spacious streets and parks. They also designated 250 acres (1 km²) for Central City Park and citizens were required by ordinances to plant shade trees in their front yards.

The city thrived due to its location on the Ocmulgee River and cotton became the mainstay of Macon's early economy. Cotton boats, stage coaches, and later, in 1843, a railroad all brought economic prosperity to Macon. In 1836, , one of the oldest women's colleges in the world, was founded in Macon. In 1855 a referendum was held to determine a capital city for Georgia. Macon came in last with 3,802 votes [http://roadsidegeorgia.com/city/macon.html] .

During the , Macon served as the official arsenal of the Confederacy and Macon City Hall, which would serve as the temporary state capitol in 1864, was converted to use as a hospital for the wounded. However, Macon was spared by General on his march to the sea. The nearby state capital of had been sacked and Maconites prepared for an attack. But General Sherman feared that Confederate forces were preparing a unified attack of their own and therefore bypassed Macon. Throughout the era of Reconstruction and into the twentieth century, Macon grew into a prospering town in Middle Georgia, and began to serve as a transportation hub for the entire state.

In 1994 Tropical Storm Alberto made in dumping 24" inches of rain resulting in major flooding in Georgia. Macon was one of the worst flooded cities,Fact|date=May 2007

Macon was famous for being the home of the murderess Anjette Lyles, [ [http://www.southernscribe.com/reviews/history/whisper_candle.htm Southern Scribe ] ] as well as alleged axe murderer Thomas Woolfolk. [While Woolfolk was convicted and hung for the crime, he never confessed, and a note found on a lynched man has cast doubt on his guilt.]

.On Mothers Day 2008, a EF3 tornado touched down about 5:30 AM. The storm ravaged the area in less than 30 minutes. Many structures were damaged, including the area's largest mall, the Macon Mall. Three people died in the awful storm,nicknamed "the Mothers Day storm of 08'"

Macon is one of Georgia's three , along with Augusta and Columbus. The Fall Line is where the hilly lands of the Piedmont meet the flat terrain of the . As such, Macon has a varied landscape of rolling hills on the north side and flat plains on the south. The causes rivers in the area to decline rapidly towards sea level, making it an ideal location for mills in the past. The is the major river that runs through Macon.

Macon has a humid, subtropical temperature. The summer often reaches its high in the mid-90s, and the winters have lows in the mid-40s. The city has an average annual precipitation of convert|45|in|mm. Macon is often considered a dividing line or "natural snowline" of the southeastern United States with areas north of the city receiving snowfall annually, while areas to the south typically not receiving snowfall every year or at all. 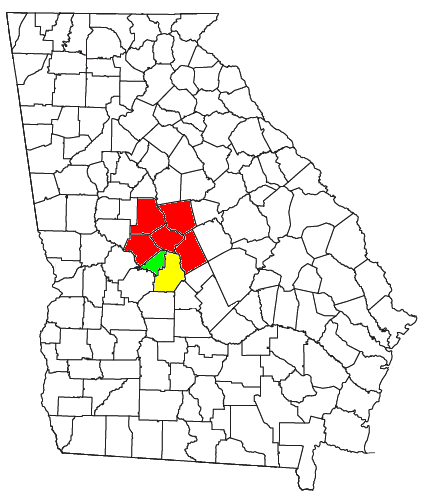 In 2007 the city hosted the Macon Symphony Orchestra, [ [http://www.maconsymphony.com/ Macon Symphony Orchestra Website] ] which performed at the Grand Opera House in downtown Macon, as well as a youth symphony, the Middle Georgia Concert Band, [ [http://www.middlegeorgiaconcertband.org/ Middle Georgia Concert Band website] ] and other groups, some associated with the local universities.Fact|date=February 2008

* - Macon has referred to itself as the "Cherry Blossom Capital of the World." It had over 300,000 ,more than any other city in the world.Fact|date=October 2007 During mid-March of every year, the height of the trees' bloom, Macon has held a 10-day celebration of concerts, food festivals, arts and crafts shows, parades, street markets, picnics, dances, and exhibitions of artists from around the world. The city became bathed in pink, the symbolizing color of this event, reflecting the color of the blossoms. The festival has been Macon's largest and best-known event. In 2007, it was among the top 20 events in the South, top 50 in the United States, and one of the top 100 in North America. Fact|date=January 2008

*First Night Macon - First Night Macon has been a family-oriented arts festival held in Macon on New Year's Eve. It has featured concerts, dances, art shows, and theatrical performances at different venues and galleries around the downtown area, and a grand finale of fireworks at midnight.
*Pan African Festival - Macon has a cultural heritage. In April, Macon has held the Pan-African Festival featuring parades, and musical performances, African dancing, films, food festival, cultural shows, and exhibitions.
*Ocmulgee Indian Celebration - A celebration of Macon's original Native American Heritage, this festival has been held every September at . Representatives from diverse backgrounds of , , , Creek, , and other nations have come to share stories, exhibit native art, perform dances, and play live music.
*The Georgia State Fair - The Fair has been held in Central City Park every year starting in late September.
*The Georgia Music Hall of Fame has hosted Georgia Music Week in September. During the museum's free Brown Bag Boogie concert series, artists from across the state have performed outdoors at noon. Festivities have also included the annual Georgia Music Hall of Fame Awards held in Atlanta.
*Macon's annual Bragg Jam festival features an Art and Kids' Festival along the Ocmulgee Heritage Trail and a nighttime Pub Crawl featuring local and national musical acts. The event has paid tribute to the lives of musicians Brax and Taylor Bragg, two brothers who were killed in an automobile accident. Proceeds have benefited the Ocmulgee Heritage Trail

* is located near downtown Macon. It preserves some of the largest mounds in Georgia built by the Native Americans of the a millennium ago. The park features a spiral mound, funeral mound, temple mounds, burial mounds, an earth lodge, as well as other smaller sites used for ceremonial purposes.

*Rose Hill Cemetery is one of Macon's oldest cemeteries. It is a popular attraction with many fans of the , as two members of the band ( and ), are interred there, as are many Civil War soldiers.

*Hay House - also known as the "Johnston-Felton-Hay House", it has been referred to as the "Palace of the South"

", a daily newspaper, is the primary newspaper in Macon.

The Macon Transit Authority (MTA) is Macon's public-transit system, operating the bus system within Bibb County. However, many commuters in Macon and the surrounding suburbs use private automobiles as their primary transportation. This results in heavy traffic during rush hour and contributes to Macon's air pollution.

Macon Transit Authority has also started a trolley system. The trolleys have been offering tours in the downtown Macon area since 1999. The tour consist of all of the major historical sites such as the Georgia Music Hall of Fame, the Hay House, and the Tubman Museum. There are three trolleys; MITSI, Miss Molly, and Sweet Melissa and each holds up to 39 passengers. Greyhound Lines provides intercity bus service between Macon and many locations throughout the United States and Canada. The Greyhound terminal is situated at 65 Spring Street, on the eastern edge of the downtown area.