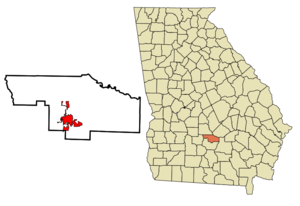 It was created in 1895, as a community for Civil War veterans by newspaper editor Philander H. Fitzgerald, a former drummer boy in the . Ironically, the town is located less than 15 miles from the site of the capture of Confederate president on May 10, 1865.

In recent years, the unofficial, and sometimes controversial of the city has become the , a wild chicken native to the . In the late 1960s, a small number were released into the woods surrounding the city and have thrived to this day.

Fitzgerald is also home to the famous Dorminy-Massee Bed and Breakfast. Built in 1915 by J. J. (Captain Jack) Dorminy for his family, this two-story, colonial-style home is now listed on the . The bed and breakfast features eight bedrooms, each with a private bath, an elegant living room and parlor, and spacious grounds. The Inn is within walking distance of Fitzgerald's historic downtown area, as well as, The Blue and Gray Museum.

There were 3,448 households out of which 31.2% had children under the age of 18 living with them, 36.3% were married couples living together, 23.1% had a female householder with no husband present, and 35.9% were non-families. 31.8% of all households were made up of individuals and 14.9% had someone living alone who was 65 years of age or older. The average household size was 2.47 and the average family size was 3.12.

Well-known natives include hero Ray Davis, track star , authors and , recently inducted member of the Tap Dance Hall of Fame Charles Greene, and 2007 . Gerald Thompson, the city's , currently holds the distinction as the longest serving mayor in the state of Georgia, in office since 1968.