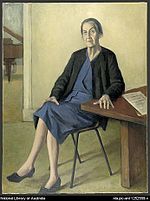 She composed over 150 works for piano, songs and other instrumental and orchestral works and performed as a concert pianist with eminent conductors including Sir Malcolm Sargent, Sir Bernard Heinze and Geoffrey Simon. She also had books of poetry published, and wrote an autobiography.

Hyde was born in Adelaide. Music was an important part of her family life: her mother, Muriel, played and taught piano; her aunt, Clarice Gmeiner, played violin, viola and harp with the South Australian Symphony Orchestra; and her younger sister, Pauline, played violin and sang.[1] Her early music lessons were provided by her mother, but in 1925 she won a scholarship to attend the Elder Conservatorium of Music in Adelaide.

After completing her Bachelor of Music degree in 1931, she won an Elder Scholarship to the Royal College of Music in London which she attended from 1932 to 1936.[1] She won several composition prizes while at the College. However, during this time she also suffered a nervous collapse, and her mother went to England to be with her.[1]

Hyde gave her first recital at Holland Park in 1933, while studying in London, and in 1934 her Piano Concerto No. 1 in E flat minor was performed by the London Philharmonic Orchestra. It was conducted by Leslie Heward and Miriam Hyde performed the solo part herself.[2] She saw many of the great musicians of the time, including Rachmaninoff, Stravinsky, Prokofiev, Yehudi Menuhin and Elisabeth Schumann.

She returned to Adelaide in 1936, and soon after moved to Sydney where she worked for several decades as a composer, recitalist, teacher, examiner and lecturer. It was here that she also met her husband, Marcus Edwards, with whom she had two children, Christine Carolyn (1950) and Robert (1952). [3]

She was appointed Patron of the Music Teachers' Association of South Australia (MTASA) and established the Miriam Hyde Award for the Association.[6]

Her 90th birthday was celebrated with concerts and broadcasts throughout Australia.

Miriam Hyde died in 2005, just a few days before her 92nd birthday.

One of her best known pieces is the piano solo Valley of Rocks.

She wrote two books of poetry, The Bliss of Solitude (1941, Economy Press) and A Few Poems (1942, Economy Press). She also wrote her autobiography, Complete Accord (1991, Currency Press) and donated the royalties to the Elder Scholarship that she won in 1931.[6]