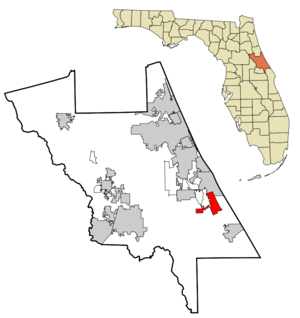 mapsize =
map_caption = Location in Volusia County and the state of

There were 7,579 households out of which 28.1% had children under the age of 18 living with them, 56.6% were married couples living together, 11.4% had a female householder with no husband present, and 27.9% were non-families. 22.4% of all households were made up of individuals and 11.7% had someone living alone who was 65 years of age or older. The average household size was 2.46 and the average family size was 2.85.

Business and industry flourish in Edgewater. From a honey exporting company established in 1940, to the boom of boat manufacturers in recent years, a growing number of companies are taking advantage of the business-friendly nature of the city.

A pro-business city government recognizes the vital role that business and industry play in the community’s economy and quality of life. Business thrives with products of the paint, building, boat, garment and honey industries produced locally and distributed throughout the global marketplace.