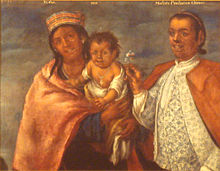 Casta in South-America: "An Indian and a Mulato produce a Chino", Indian school, 1770.

Chino is a Spanish proper word for "Chinese", also used informally to refer to people with Asian features who may not be actually Asian. Chino, in Spanish can colloquially refer to curly hair.(pictured).[1] Chino may also refer to: