The Orange Weaver Finch (Ploceus aurantius) is a species of bird in the Ploceidae family. It is found in Angola, Cameroon, Central African Republic, Republic of the Congo, Democratic Republic of the Congo, Ivory Coast, Equatorial Guinea, Gabon, Ghana, Kenya, Liberia, Nigeria, Sierra Leone, Tanzania, Togo, and Uganda. They are also commonly kept in aviculture.

These birds exhibit sexual dimorphism, and plumage also varies seasonally. During breeding or "nuptial" season, the male has a black beak, black plumage around the eyes, and brown wings, The rest of the plumage is a brilliant red to orange in color. Outside of breeding season, the males sport plumage that is considerably more drab, brown overall with some dark streaks and a cream-colored belly. The females have the same plumage year-round, which resembles that of the off-season males. The males of this species are often confused males of the species E. o. orix, more commonly known as the grenadier weaver, or red bishop. 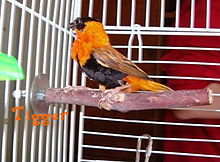 In the wild, orange weavers make their homes in reed beds close to the surface of water. True to its name, male orange weavers construct complexly woven nests during breeding season. These birds, like most other finches, are social, and enjoy the company of other finches. However, as a pet; an Orange Weaver Finches has been noted to enjoy living alone & will enjoy bouncing from various scattered perches in a tall cage setting.

The Orange Weaver Finch is commonly kept in aviculture. They are quite hardy for small birds. Like all finches, they should be kept in groups. Because of their active nature, these finches should be housed in large aviaries. They may be housed with other, larger finches, and will generally do well in this situation. However, individual orange weavers can become quite aggressive during breeding season. Because of this, the aggressive finches must sometimes be separated from the group. Orange weavers should be fed a diet that is a balanced mixture of small cereal seeds, fresh greens and some live foods, such as meal worms. It can be noted by an Orange Weaver Finch owner that Orange Weaver Finches are able to enjoy Zupreem fruity pellets for Finches and will exhibit proper colorful plumage growth with each seasonal change.

Orange weavers are polygamous in the wild, and two or three females should generally be provided for each male.