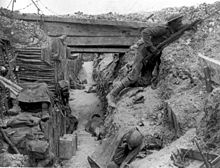 A British trench near the Albert-Bapaume road at Ovillers-la-Boisselle, July 1916 during the Battle of the Somme. The men are from A Company, 11th Battalion, The Cheshire Regiment.

The 22nd Foot was raised by the Duke of Norfolk in 1689 and was able to boast an independent existence of over 325 years, being one of five line infantry regiments never to have been amalgamated in its history; Up to 2006, it shared this claim with:

In 1689, Henry, Duke of Norfolk, raised a regiment on the little Roodee at Chester, in an effort to resist any attempt by James II to re-take the English throne. For the early part of its formation, the regiment was known by the name of the current Colonel-in-Chief, later becoming known as the 22nd Regiment of Foot. In the same year that it was raised, the regiment saw its first action as part of a British force sent to Ireland under the command of General Frederick Schomberg, 1st Duke of Schomberg, taking part in the siege and capture of Carrickfergus. In 1690, the 22nd fought in the Battle of Boyne, and in 1691 at the Battle of Aughrim. The regiment continued to serve as a garrison in Ireland from this point until 1695, when it was sent to the Low Countries for a short time before returning to its duties in Ireland.

In 1702, the Regiment sailed to Jamaica, spending the next twelve years in combat duties against the French and native population, both on land and at sea.

In 1726 the Regiment was posted to Minorca where it remained for the next 22 years, although a detachment was present at the Battle of Dettingen in 1743, during the War of the Austrian Succession.

By 1751 the Regiment had become the 22nd Foot, having previously been called after its successive colonels. In 1758 it formed part of Lord Amhest's expedition against the fortress of Louisberg in French Canada. The following year the Regiment took part in General Wolfe's victory over the French at Quebec. The 22nd Foot received two battle honours for taking part in the capture of Martinique and the British expedition against Cuba during 1762.

After home service the Regiment was sent to America in 1775. Having embarked in advance of the rest of the Regiment at the request of Colonel Gage, Lt. Col. Abercrombie arrived in Boston just before the Battle of Bunker Hill, where he was killed in action. The Regiment later evacuated from Boston to Halifax and then onto the New York and New Jersey campaigns of 1776. Its Light Infantry Company participated in the Philadelphia Campaign of 1777 and later the Southern Campaigns in the 1780s, eventually surrendering with Cornwallis at Yorktown. The Battalion Company's occupied Newport Rhode Island, participating in the Battle of Rhode Island, eventually returning to New York City in 1779 and surrounding territory where the bulk of the Regiment would remain until the end of the War, participating most notably at the First Battle of Springfield in early June 1780.

Although the County designation existed as early as 1772, the Regiment was retitled The 22nd (Cheshire) Regiment of Foot in 1782, the Regiment served in the West Indies from 1793, taking part in expeditions against Martinique, St Lucia, Guadeloupe and St Domingo. Between 1800 and 1803 the 22nd was posted to South Africa, then moving to India where it suffered heavy losses during the assault on Bhurtpore (1805). In 1810 the Regiment took part in the occupation of Mauritius where it remained in garrison until 1819.

In 1843 the Regiment gained the battle honours of or Meeanee, Hyderabad and Scinde during further Indian service.

As one of the older regiments of British line infantry already having two battalions, the regiment was not merged with another line regiment by the Cardwell reforms of 1881. The reforms added the following units:

Its recruiting area was confirmed as being the County of Cheshire.

Both battalions of the Regiment served in Burma between 1887 and 1891, while the 2nd Battalion saw active service in South Africa in 1900.

On 24 August 1914 the 1st Battalion suffered 771 casualties at Audregnies in France during the closing stages of the Battle of Mons. The reconstituted battalion served throughout World War I on the Western Front, winning 35 battle honours. Other battalions served at Gallipoli, in Palestine and on the Western Front. Total losses to the Regiment during 1914-18 were 8,420 dead.

During the post-war years the Regiment served in Palestine, Egypt, Cyprus, Malaya, Singapore, Hong Kong, Bahrein, Belize, Berlin, West Germany, and Northern Ireland. In 1982, 8 Cheshire's were killed in the Droppin Well bombing. It celebrated its Tercentenary in 1989, as one of only two English county infantry regiments never to have been amalgamated - retaining a distinct identity during 300 years of service .

Between 1986 and 1988, the 1st Battalion was posted to Caterham as a public duties battalion. This was the first time that a line infantry unit had been posted as such - before this, although line infantry battalions had performed public duties, this had only been for brief periods. Amongst the duties performed was the mounting of the Queen's Guard at Buckingham Palace. 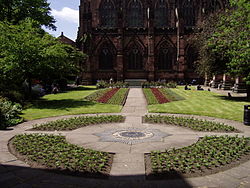 WWI and WWII memorial to the Cheshire Regiment, Chester Cathedral

Reorganisation of the British Army

In 2004, as a part of the restructuring of the infantry, it was announced that the Cheshire Regiment would be amalgamated with the Staffordshire Regiment and the Worcestershire and Sherwood Foresters to form the new Mercian Regiment. In the August of 2007, the regiment moved to Catterick, simultaneously being renamed as the 1st Battalion, Mercian Regiment (Cheshire), in the light infantry role. The regiment resides in Marne Barracks, which it shares with 5th Regiment Royal Artillery.

The regiment was awarded the following battle honours. Those from the two World Wars that are emblazoned on the Queen's Colour are indicated in bold.