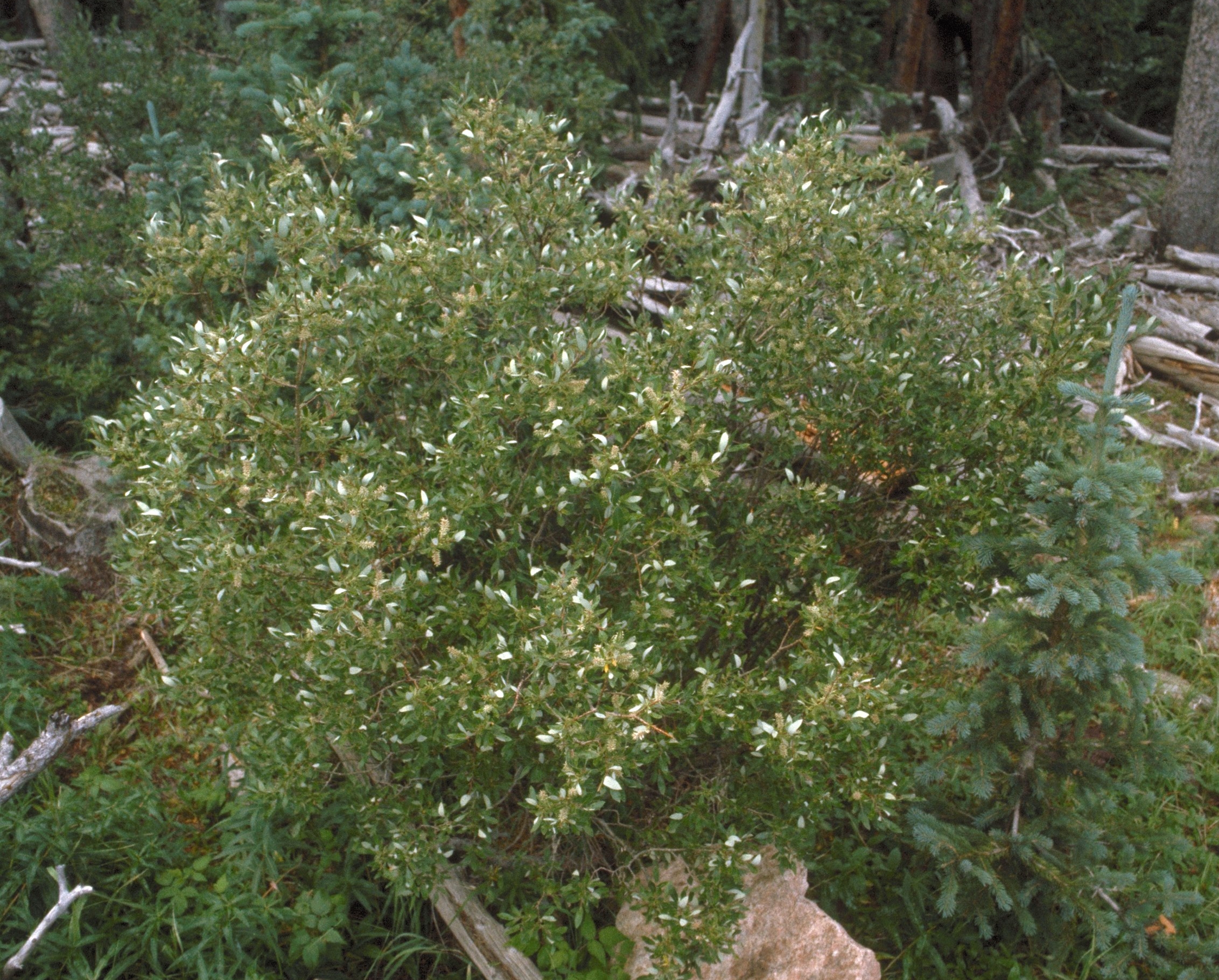 "Salix scouleriana" (Scouler's Willow; syn. "S. brachystachys" Benth., "S. capreoides" Anderss., "S. flavescens" Nutt., "S. nuttallii" Sarg., "S. stagnalis" Nutt.) is a species of native to western , from south central east to western , central , and the of , and south through the to , and along the coast through , , , and (Germplasm Resources Information Network 1997). Other names occasionally used include fire willow, Nuttall willow, mountain willow, and black willow.

It is a or small , depending on the environment, usually with multiple stems that reach 2 to 7 m in height in dry, cold, high elevation, and other difficult environments, and 10 to 20 m in favorable sites. The stems are straight and support few branches generally resulting in narrow crowns. The root system is fibrous, deep, and widespread. The thick sapwood is nearly white, and heartwood is light brown tinged with red. Stem bark is thin, gray or dark brown with broad, flat ridges. Twigs are stout and whitish green. The leaves are oblanceolate to elliptic, 5–12.5 cm long, mostly short-pointed at the apex and tapered toward the base with entire to sparsely wavy-toothed margins. They are dark-green and nearly hairless above, and white- or grayish-hairy below. It is dioecious, having male and female s on different trees. The flowers are tiny, grouped in -like s. The anthers, two per flower, are yellow, sometimes tipped with red; pistols are red. The is light reddish-brown, long-pointed capsules about 0.75 cm long. At maturity, they open to release a white fluff with tiny imbedded seeds. The species has 2n = 76 or 114 s (Anonymous 2003, Department of Ecology 2003, Harrington 1964, Peattie 1953, Sargent 1923, Viereck and Little 1972).

Scouler's Willow is the most common upland willow through most of its range. It invades quickly and abundantly after fires and logging (Viereck and Little 1972). Mineral soil seedbeds are required for seedling establishment (Forest Practices Branch 1997). In northern areas, it occurs in s, willow thickets, disturbed areas, and forests (Welsh 1974). At lower latitudes, the species grows in former clearcuts, burned areas, thinned forests, and areas of natural disturbance such as areas and river flood zones. These are all moist, well-drained to poorly drained sites. Although this willow tolerates drier conditions than most other willows, it does not tolerate xeric conditions. It is a component in a large number of vegetation types throughout its range (Anderson 2001). With few exceptions, it is the only willow found growing with other trees in upland Western forests (Johnson 1995). Soils of all textures, including skeletal soils and soils derived from most parent materials are colonized. Sites may vary from near sea level to about 3,000 m in elevation (Peattie 1953). It is top-killed by all but gentle fires, but usually greater than 65 percent of the plants sprout quickly afterwards (Anderson 2001). The species is intolerant of shade, and when overtopped by conifers and other trees, it begins to decline.

It flowers from mid to late spring, flowers appearing before leaves, often while snow is still on the ground, and fruiting occurs from late spring to mid summer, depending on area. The flowers are insect pollinated. There are about 14,300 cleaned seeds/g. Germination, which is epigeal, begins to occur in 12 to 24 hours after seeds alight on wet ground. Germination usually reaches 95 percent in 1 or 2 days (Brinkman 1974). The seeds are dispersed by the wind. Plants sprout from the root collar when cut or top-killed. Pieces of stem and root will root and grow if partially buried in moist soil (Forest Practices Branch 1997).

Annual height growth of sprouts from cut stems varies from 1 to 3 m/year. Up to 60 sprouts are produced per stem (Forest Practices Branch 1997). Maximum height at 20 years is about 9 m. At higher elevations, shrubs reach 4 to 5 m in 15 years after which growth slows until a maximum height of 10 m is reached (Natural Resources Conservation Service 2003). Fruits should be collected by hand or with pruning poles as soon as they turn from green to yellow. The capsules are air-dried until opening. Generally, the seeds should be sown as soon as possible because they remain viable for only a few days. Seed can be stored in sealed containers under refrigeration for 4 to 6 weeks, but germination begins to drop rapidly after 10 days. Seeds are broadcast on well-prepared beds that are kept continually moist until germination and seedling emergence. Light is required for successful germination (Brinkman 1974). Recommended spacing using rooted cuttings for erosion control is 1.8 m by 1.8 m; for unrooted whips or shorter cuttings, 0.6 m. Rooted cuttings can be grown to 3 m tall in containers. Cuttings should be 45 to 60 cm long, and whips (not recommended) should be 1.2 m long (Department of Ecology 2003).

Scouler's Willow protects the soil and helps return sites to forest cover following disturbance. When growing along streams, it helps protect the stream banks from erosion and shade the watercourse, thus maintaining cooler water temperatures. It is an important browse species for domestic livestock and wild animals. , , and s all like it as browse. It is sometimes the most preferred food species for White-tailed, Black-tailed, and , , , and . Small mammals, s, upland game birds, and waterfowl feed to a lesser extent on leaves, buds, and seeds. Fresh browse (twigs and leaves) contain 41 percent dry matter, 4 percent protein, 2 percent fat, 20.8 percent nitrogen-free extract, 11.2 percent crude fiber, and good quantities of mineral nutrients (Anderson 2001). The cover provided is important for mammals and birds. The flowers provide pollen and nectar to s in early spring (Anderson 2001). The wood, which is soft and close-grained, is not sawn into lumber but is used to a limited extent for firewood and wood carving (Viereck and Little 1972). The people of British Columbia used the wood for smoking fish, drying meat, and constructing fishing weirs, the inner bark for lashing, sowing, cordage, and headbands, and decoctions of twigs for treating pimples, body odor, and diaper rash (Secwepemc Cultural and Education Society 2003).