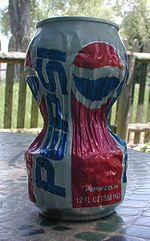 A pinched aluminium can, produced from a pulsed magnetic field created by rapidly discharging 2 kilojoules from a high voltage capacitor bank into a 3-turn coil of heavy gauge wire.

Electromagnetic forming (EM forming or magneforming) is a type of high velocity, cold forming process for electrically conductive metals, most commonly copper and aluminium. The workpiece is reshaped by high intensity pulsed magnetic fields that induce a current in the workpiece and a corresponding repulsive magnetic field, rapidly repelling portions of the workpiece. The workpiece can be reshaped without any contact from a tool, although in some instances the piece may be pressed against a die or former. The technique is sometimes called high velocity forming or electromagnetic pulse technology. 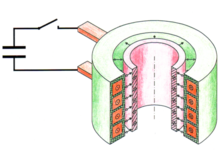 In practice the metal workpiece to be fabricated is placed in proximity to a heavily constructed coil of wire (called the work coil). A huge pulse of current is forced through the work coil by rapidly discharging a high voltage capacitor bank using an ignitron or a spark gap (copper vapour thyratron) as a switch. This creates a rapidly oscillating, ultrastrong electromagnetic field around the work coil.

The high work coil current (typically tens or hundreds of thousands of amperes) creates ultrastrong magnetic forces that easily overcome the yield strength of the metal work piece, causing permanent deformation. The metal forming process occurs extremely quickly (typically tens of microseconds) and, because of the large forces, portions of the workpiece undergo high acceleration reaching velocities of up to 300 m/s.

The forming process is most often used to shrink or expand cylindrical tubing, but it can also form sheet metal by repelling the work piece onto a shaped die at a high velocity. High-quality joints can be formed, either by electromagnetic pulse crimping with a mechanical interlock or by electromagnetic pulse welding with a true metallurgical weld. Since the forming operation involves high acceleration and deceleration, mass of the work piece plays a critical role during the forming process. The process works best with good electrical conductors such as copper or aluminum, but it can be adapted to work with poorer conductors such as steel.

Electromagnetic forming has a number of advantages and disadvantages compared to conventional mechanical forming techniques.

Some of the advantages are;

The principle disadvantages are;