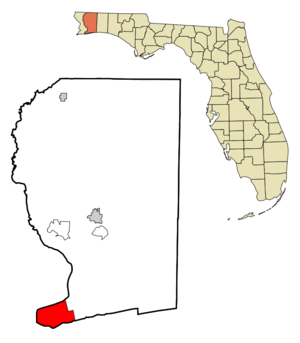 Gulf Breeze is a city located on the in , and is a of Pensacola which lies to the north, across . The population was 5,665 at the 2000 census. As of 2005, the population recorded by the is 6,455. [http://factfinder.census.gov/servlet/SAFFPopulation?_event=Search&_name=Gulf+Breeze&_state=04000US12&_county=Gulf+Breeze&_cityTown=Gulf+Breeze&_zip=&_sse=on&_lang=en&pctxt=fph]

The City of Gulf Breeze is now often referred to as "Gulf Breeze Proper." This differentiates it from other communities further east which are assigned Gulf Breeze addresses by the U.S. Postal Service but lie outside of the city limits.

Growth of the city itself is geographically restricted, surrounded by major water bodies on three sides. Additionally, the eastern portion of Gulf Breeze is occupied by the Naval Live Oaks Reservation. As a result, new growth occurs outside of the city limits along U.S. Highway 98.

Gulf Breeze (lower center) is north of , south of , and surrounded by .]

From 1995 to 2005, Gulf Breeze has received several direct hits and severe blows from numerous hurricanes. In 1995, Hurricane Erin and Opal made landfall just south of the city. While Erin caused mild damage to the area, devastated much of the neighboring Pensacola Beach and Navarre communities. Nine years later, in 2004, made landfall west of the Gulf Breeze but caused widespread damage in the city, destroying many homes and businesses. In 2005, passed just east of the city. Damage from this storm was more severe than that received in communities lying further west.

Gulf Breeze became famous in as the site of several sightings.

AAA has designated Gulf Breeze as also one of seven "strict enforcement areas" for traffic laws in the United States. This rating is one level short of , and is only shared by six other cities and towns nationwide.

Gulf Breeze also received media attention for instituting a program to allow volunteers to drive s within the city and report traffic violations to . Volunteers receive training in radio use and first aid but are not empowered to make s or traffic stops.

There were 2,377 households out of which 28.1% had children under the age of 18 living with them, 57.7% were married couples living together, 10.6% had a female householder with no husband present, and 29.4% were non-families. 25.3% of all households were made up of individuals and 13.0% had someone living alone who was 65 years of age or older. The average household size was 2.36 and the average family size was 2.83.