Square One (puzzle)
This article is about the puzzle. For the popular phrase, see Back to square one.

The Square One, also known as Back to Square One and Cube 21, is a puzzle similar to the Rubik's Cube. Its distinguishing feature among the numerous Rubik's Cube variants is that it can change shape as it is twisted, due to the way it is cut, thus adding an extra level of challenge and difficulty. A Super Square One puzzle was recently introduced, which has two additional layers that can be scrambled and solved independently of the rest of the puzzle. 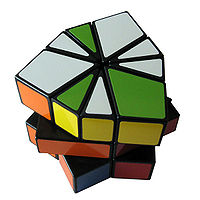 The Square One puzzle in one of its unsolved states. 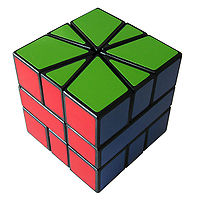 The same puzzle in its original (solved) state.

The middle layer contains two trapezoid pieces, which together may form an irregular hexagon or a square.

Each layer can be rotated freely, and if the boundaries of pieces in all layers line up, the puzzle can be twisted vertically, interchanging half of the top layer with half of the bottom. In this way, the pieces of the puzzle can be scrambled. Note that because the kite pieces are precisely twice the angular width of the triangular pieces, the two can be freely intermixed, with two triangular pieces taking the place of a single kite piece and vice versa. This leads to bizarre shape changes within the puzzle at any point.

Once the puzzle has a cube shape, the upper and lower layers are cut in an Iron Cross-like fashion, or equivalently cut by two concentric (standard) crosses, that make an angle with each other.

Like Rubik's Cube, the pieces are coloured. For the puzzle to be solved, not only does it need to be in cube shape, but each face of the cube must also have a uniform colour. In its solved (or original) state, viewing the cube from the face with the word "Square-1" printed on it, the colours are: white on top, green on the bottom, yellow in front, red on the left, orange on the right, and blue behind. Alternative versions of the Square One may have different colour schemes. 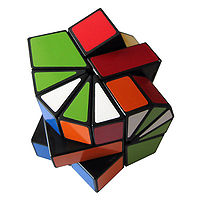 The Square One puzzle was sold in this shape with instructions for turning it back to a cube. This is halfway through a vertical turn.

A good number of solutions for this puzzle exist on the internet. Some solutions employ the classical layer-by-layer method, while other approaches include putting the corner pieces in place first, then the edge pieces, or vice versa. Some solutions are a combination of these approaches. Although these solutions use different approaches, most of them try to restore the cube shape of the puzzle first, regardless of the placement of the pieces and the parity of the middle layer, and then proceed to put the pieces in their correct places while preserving the cube shape.

The majority of solutions provide a large set of algorithms. These are sequences of turns and twists that will rearrange a small number of pieces while leaving the rest of the puzzle untouched. Examples include swapping two pieces, cycling through three pieces, etc. Larger scale algorithms are also possible, such as interchanging the top and bottom layers. Through the systematic use of these algorithms, the puzzle is gradually solved.

Like solutions of the Rubik's Cube, the solutions of Square One depend on the use of algorithms discovered either by trial and error, or by using computer searches. However, while solutions of Rubik's Cube rely on these algorithms more towards the end, they are heavily used throughout the course of solving the Square One. This is because the uniform shape of the pieces in the Rubik's cube allows one to focus on positioning a small subset of pieces while disregarding the rest, at least at the beginning of a solution. However, with the Square One, the free intermixing of corner and edge pieces can sometimes cause a certain desired operation to be physically blocked; so one must take all pieces into account right from the beginning. Some solutions of the Square One rely solely on the use of algorithms. 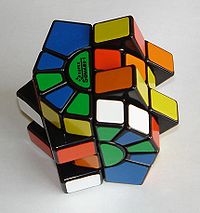 The Super Square One, scrambled 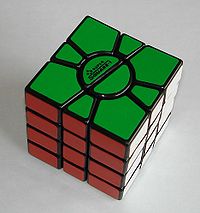 The Super Square One, solved 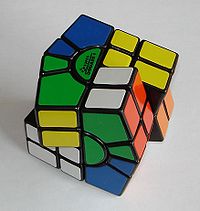 The Super Square One, in one of its many possible shapes

The Super Square One is a 4-layer version of the Square One. Just like the Square One, it can adopt non-cubic shapes as it is twisted. As of 2009, it is sold by Uwe Mèffert in his puzzle shop, Meffert's.

Despite its appearance, the Super Square One is not significantly more difficult to solve than the original Square One. The middle layers are nearly identical to the top and bottom layers of the Square One, and may be solved independently using the same methods as the Square One. The corners of the middle layers are distinguishable because the corners with the same two colors are mirror images of each other, but the middle edges of each face are interchangeable since they show only one color each.