The National Institutes of Health (NIH) campus is located in Bethesda, Maryland. Most of the institutes house their Divisions of Intramural Research on this campus spread out among various buildings.

The Bethesda campus has been occupied since 1938 when the original National Institute of Health began to expand outside of Washington, D.C.[1] The Clinical Center, Building 10, opened in 1953 with 540 beds, thus allowing for clinical research. Launched in the wake of Nazi medical experiments done during World War II, research protocols here fell under ethical review by a review board.[2] 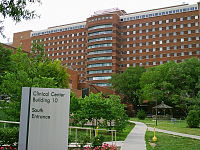 There are over fifty buildings on the Bethesda campus with designated numbers.

As a federal government facility housing sensitive research, the Bethesda campus has security measures for the safety of employees, patients, and visitors. A Department of Health and Human Services identification card is needed for immediate access. Visitors must have a government issued photo ID for a pass, and their vehicles and/or persons undergo inspections.[3]