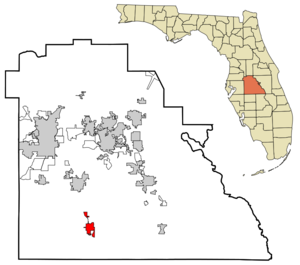 Fort Meade is the oldest city in Polk County, dating its origins to 1849 when it was an old military road from Tampa (Fort Brooks) to Fort Pierce during the Indian wars. The 1880s business district was located on old Wire Street (now Broadway), which was a casualty to 4 devastating fires.

The earliest known burial is John I. Hooker (1821-1862) located in the Evergreen Cemetery in town. Fort Meade's Christ Church (Episcopal) located at 526 N. Oak was built in 1889. It is a frame vernacular with Gothic Revival elements and was designed by architect J. H. Weddell. A minister by the name of C.E Butler had committed suicide at the church in 1894. Located next to Christ Church is the famous . Located within the historic district, the house was used for the HBO motion picture The Judgement featuring , and (1990). Future Confederate General , was stationed at the fort in 1851. The town was burned by Union forces in 1864 and all of the original structures were destroyed, except the 2nd fort which was dismantled in the 1890s. Fort Meade has over 300 hundred homes on the and a handful that date to the late 1800s.

There were 2,068 households out of which 31.8% had children under the age of 18 living with them, 52.7% were married couples living together, 16.4% had a female householder with no husband present, and 26.1% were non-families. 22.2% of all households were made up of individuals and 11.5% had someone living alone who was 65 years of age or older. The average household size was 2.72 and the average family size was 3.16.

"On , at a chemical plant site in Fort meade Florida, two billion gallons of slightly toxic liquid were released into Whidden creek. The waste also flowed into Peace River and Charlotte Estuary, and for 10 to convert|50|mi|km tens of thousands of water going creatures had died, including fish and clams."Book: Laying Waste, page 312 - Michael Brown - ISBN 0-671-45359-9