The Croatian Navy (Croatian: Hrvatska ratna mornarica) is a branch of the Croatian Armed Forces.

The modern Croatian navy was born during the Croatian War of Independence in 1991; However, the navy traces its roots to the early 10th century.

The medieval Croatian state at the time possessed a formidable navy which controlled much of the Eastern Adriatic, and the day when the fleet of Croatian duke Branimir defeated the Venetian navy on September 18, 887 was chosen as the Day of the Croatian Navy.

The contemporary origins of the navy are in the Austro-Hungarian Navy, as well as the navy of Yugoslavia, whose 35 ships and various depots were seized during the war. 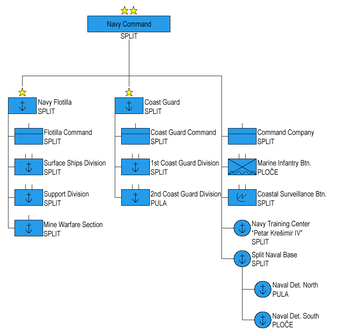 Current structure of the Croatian Navy

The following commands were created to carry out the mission of the Croatian Navy:[1] 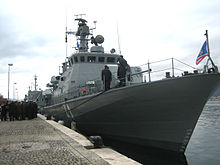 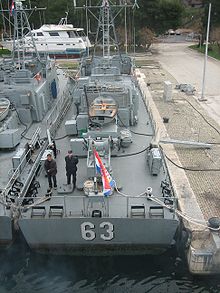 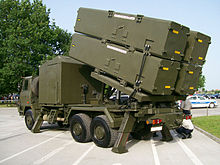 Two former Helsinki class missile boats, FNS Oulu and FNS Kotka, were acquired from Finland. They were renamed Vukovar and Dubrovnik respectively, and entered service in December, 2008. They were acquired along with a considerable quantity of spare parts (most notably three MTU engines - to be installed on Kralj class vessels) from Finland due to a severe shortage of vessels at present. The price of these ships was €9 million and is considered rather symbolic, mostly because it was a part of the offset deal for the previous Croatian acquisition of Patria AMV armoured vehicles. The ships reached their full operational capability in June, 2009.

Three other missile boats are currently undergoing overhauls. Končar class missile boat Šibenik has already been overhauled with new turbine engines and radars and is due to remain in service until 2018-2020. Kralj class vessels were planned to be extensively modernized by 2010 at a price of €20 million, but as a result of the recent acquisition of Helsinki class boats, they will only undergo an overhaul and an engine replacement, believed to be worth around €5 million per each ship.

Four patrol boats currently in service are going to be augmented by an entirely new class. The construction of the first out of projected 10 vessels was scheduled to start in 2007. So far none of the vessels have been commissioned and the decision to finally start building the first ship is being postponed for nearly three years. The latest information indicate that the construction of the class should commence in 2010 with the final vessel scheduled to be launched by the end of 2013. These patrol boats will be built in Croatian shipyards and should be around 40 meters long, incorporating the latest stealth technology. Similar but slightly smaller vessels have recently been built for Libya. Follow-up orders have been made and 16 ships are now entering Libyan service. A second country is also rumoured to have ordered the vessels.

The introduction of new corvettes or perhaps even light frigates is planned before 2015 but numbers and class of these ships vary. The most probable number is 2 ships, but as high as 4-5 have been mentioned. This is due to the previous need for 4-5 large offshore patrol vessels, but specifications have now changed and it is most likely that 2 corvettes or light frigates will be procured. At first, they were supposed to be built by domestic companies and measure 80 meters in length. This is now questionable due to higher demands which state that the new vessels might be up to 120 meters long and very well equipped. The German Braunschweig class corvette and French Gowind have been mentioned so far. However, it is now probable that they will be a variant of the MEKO design.