Oxazole is the parent compound for a vast class of heterocyclic aromatic organic compounds. These are azoles with an oxygen and a nitrogen separated by one carbon.[1] Oxazoles are aromatic compounds but less so than the thiazoles. Oxazole is a weak base; its conjugate acid has a pKa of 0.8, compared to 7 for imidazole.

Other methods are reported in literature. 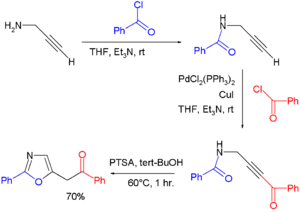 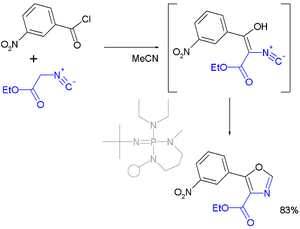 In biomolecules, oxazoles result from the cyclization and oxidation of serine or threonine nonribosomal peptides: 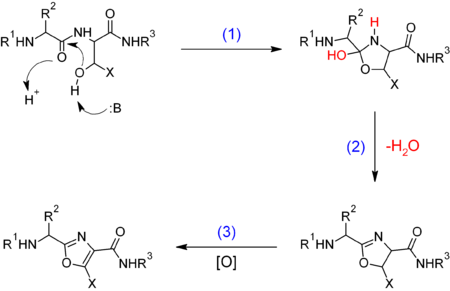 Oxazoles are not as abundant in biomolecules as the related thiazoles with oxygen replaced by a sulfur atom.

In the balanced half-reaction three equivalents of water are consumed for each equivalent of oxazoline, generating 4 protons and 4 electrons (the latter derived from CeIV).