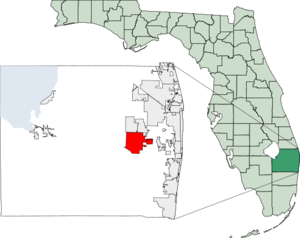 Wellington is a village in Palm Beach County, , . As of 2006, the village had a population of 55,584 according to the . Wellington is part of the Miami-Fort Lauderdale-Pompano Beach, Florida Metropolitan Statistical Area, which had a July 2006 estimated population of 5,463,857.

Wellington was originally the world's largest strawberry patch, the Flying Cow Ranch. C. Oliver Wellington bought 18,000 acres (73 km²) of swampland in the 1950s in central Palm Beach County that eventually would be called the Village of Wellington. Wellington began as a approved by Palm Beach County in 1972. For many years it functioned as a bedroom community with few shopping centers or restaurants until it was incorporated in December 1995. Wellington holds the largest horse show in the world from the last week in January to the middle of March. [cite web |url=http://www.wellingtonthemagazine.com/what.html |title=What is Wellington? |publisher="Wellington The Magazine" |accessdate=2007-08-09]

As of 2000, Wellington had the eighty-fifth highest percentage of n residents in the US, with 3.27% of the village's population. [cite web |url=http://www.epodunk.com/ancestry/Cuban.html |title=Ancestry Map of Cuban Communities |publisher=Epodunk.com |accessdate=2007-11-19]

Wellington is world-famous for equestrian and events, and the Village of Wellington has a large, recently renovated public library, a recreation center, a number of public parks and ball fields, and hosts seasonal events such as the annual Top Gun model aircraft show and holiday parades. There are a number of entertainment and cultural venues - such as the and the - in nearby .

A large number of recent Wellington residents are families with young children. All of the elementary schools and middle schools within its boundaries are currently A-rated by the Florida Department of Education. There are two high schools in Wellington - Wellington Community High School, which is A-rated, and Palm Beach Central High School, which is also B-rated. The Palm Beach County school system allows students to attend s outside of the village if they so wish, though students are nominally assigned to schools in their own area.

has proposed a Wellington campus. The Wellington town council voted affirmatively on 13 August 2008 to enter negotiations with the college. Plans are to complete the new campus in 2010. [http://www.palmbeachpost.com/opinion/content/opinion/epaper/2008/07/08/c10a_pbcc_edit_0708.html]