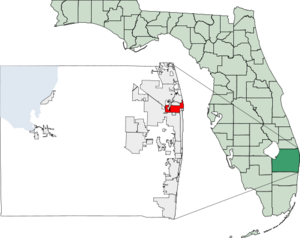 Riviera Beach is a city in Palm Beach County, , U.S.A. which was incorporated September 29, 1922. The population was 29,884 at the 2000 census. As of 2004, the population was estimated by the to be 32,522. [ [http://www.census.gov/popest/cities/tables/SUB-EST2004-04-12.xls Annual Estimates of the Population for Incorporated Places in Florida, Listed Alphabetically: April 1, 2000 to July 1, 2004] - retrieved ] Riviera Beach is predominantly an city and it is on the . It is home to the and a station, and has its own marina. The city consistently has crime rates well in excess of the United States average and is also notable for its high levels of poverty. [ [http://www.cityrating.com/citycrime.asp?city=Riviera+Beach&state=FL Riviera Beach Crime Report] - retrieved ] [ [http://www.palmbeachpost.com/localnews/content/local_news/epaper/2006/07/02/m1a_RBnew1_0702.html Riviera Beach struggles to overcome decades of divisiveness] - retrieved ] The city has been increasingly targeted for redevelopment aiming to take advantage of the city's desirable location along the ; to this end, a massive taking through has been proposed. [ [http://www.newsdesk.org/archives/000405.php An Eminent Domain High Tide in Riviera Beach] - retrieved ]

There were 11,387 households out of which 29.3% had children under the age of 18 living with them, 37.1% were married couples living together, 27.0% had a female householder with no husband present, and 29.3% were non-families. 22.3% of all households were made up of individuals and 6.1% had someone living alone who was 65 years of age or older. The average household size was 3.04 and the average family size was 4.62.

Besides being a predominately African American and black community, as of 2000, Riviera Beach's Haitian community had the fifty-ninth highest percentage of US residents, with 2.10% of the city's population (tied with Coral Springs, as well as Haverstraw, NY and East Massapequa, NY.) [cite web |url=http://www.epodunk.com/ancestry/Haitian.html |title=Ancestry Map of Haitian Communities |publisher=Epodunk.com |accessdate=2007-11-13]

In the 1930s, Riviera Beach was also known as the home of many Bahamian immigrants, known as "Conchs". A 1939 study by the WPA's Florida Writers Project (by writer Veronica Huss and photographer Charles Foster) of the Conchs was undertaken, resulting in a national traveling exhibit entitled "Conch Town."

* [http://www.rivierabch.com/ Riviera Beach official website]
* [http://www.floridamemory.com/PhotographicCollection/photo_exhibits/wpa/ Online version (made available for public use by the State Archives of Florida) of a 1939 WPA exhibit on the Conchs of Riviera Beach, Florida ]