The Yucatán Jay (Cyanocorax yucatanicus) is a species of bird in the Corvidae family, the crows and their allies. It is found in Belize, Guatemala, and southern Mexico. Its natural habitats are subtropical or tropical dry forests and heavily degraded former forest. Adults are black, with cerulean blue wings, mantle, and tail. They have black bills, black eye rings, and yellow legs. Juvenile Yucatán Jays have completely yellow bare parts and white, rather than black, body plumage. They molt out of the white plumage by September or October, but retain the yellow bill and eye ring for a few more months. They also have pale-tipped retrices, which the adults lack. 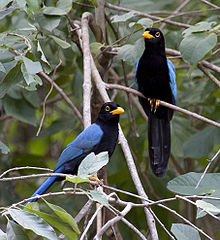