Raj Comics is an Indian comic book line published by a division of Raja Pocket Books.

Raj Comics was started in 1986 by Rajkumar Gupta.

The company focuses on superhero-centric comic books. The majority of their output is in the Hindi language, but a few titles and 'special editions' have been translated into English. It has produced close to 35,000 comics to date. Raj Comics has become a legend over the years. Around the start of 90s, Raj Comics were so popular, because of its characters such as Dhruv, Doga, and Nagraj, that children and young teenagers started to rent hundreds of comics to other readers who were unable to buy the comics, even though the comics were economically priced and several discounts were provided to regular and guide-readers. Renting and lending of comics, as well as exchanging stickers based on these heroes, became so popular that not just kids, but their parents as well, started to consider comics a good habit of reading. Sometimes comics did became hazardous for students at school who were reading them instead of paying attention to classes. Disciplinary action was taken against students who were found reading comics in class, so this is a testament to the almost religious status of Raj comics among the Indian youth. Raja Pocket Books started publishing Raj Comics and King Comics simultaneously. King comics only lasted for around 2 years. After that, some heroes of King Comics, like Gamraj, were merged into Raj Comics. A recently released issue, based on common wealth games, also featured a King Comics character known as "Vakra."

In 2008, The Sarai Programme at CSDS published a book[1] as a part of Sarai Media Lab's "Research Project on Raj Comics and graphic novel culture in Delhi". That publication, available, for free, as a PDF from the Sarai website, has the following introductory text:

"Around the late 1980's when Indrajaal Comics was beginning to close shop and Amar Chitra Katha was printing re-runs, three brothers decided to open their own comic book publication house. In their quest for the Indian super hero, Raj Comics was born.

After 25 years of producing an entire universe of superheroes, Raj Comics is the largest comic book publishing house in India. They have published more than 5000 titles and are home to more than 20 characters."

Recently, Raj Comics has started using modern methods to promoting their comics, such as teaming up with major service providers like Vodafone and Airtel. Raj Comics has started 3D comics and will soon produce motion comics. Raj Comics` major projects include movies based on their two superheroes Nagraj and Doga. It is expected that Raj Comics` fan base will tremendously increase once the movies are released.

The major characters in Raj Comics are: 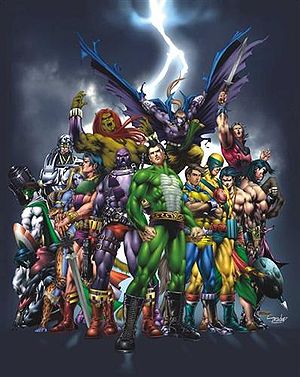 Other than their usual characters, Raj Comics publishes other stories focusing on fairy tales, knight tales, detective and other sorts of stories. Raj Comics, on its official website, has launched as exclusive series called Raj Rojana. The concept behind this series is to release a new page every day. Besides physical copies, Raj Comics is planning to launch motion comics, in line with recent moves from American comic companies DC Comics and Marvel Comics.