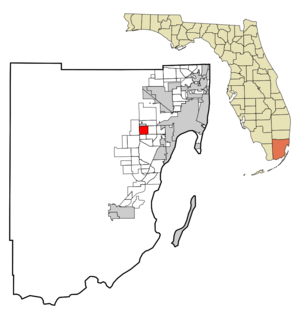 University Park is also the name of the main campus of , located in the census-designated place. The campus encompasses 344 acres (1.4 km²) and is located in University Park, in metropolitan Miami, . Florida International University was built from around 1965 onwards, with the destruction of Tamiami Airport. At the time, very little was located around FIU, and the campus was referred to as University Park. As Miami grew west, the area came to be known as University Park after the university's campus name.

Until the early-1990's, aerial pictures of the campus clearly revealed the features of the airport that used to occupy the land until 1969. has obliterated all of these features, and only the University Tower remains as memory of the university's past. Today, University Park is home to about 87% of the student population and 94% of housing students. University Park is a lush, heavily-vegetated campus, with many lakes and nature preserves, as well as an arboretum and has 92 buildings. Current construction at University Park includes an independent for the , a Graduate Business School Complex, a Molecular Biology Building, a Student Services Building, a Social Sciences Building, a Medical School Complex, and an expansion to for a seating capacity of 45,000.

Located five blocks north of University Park, is the 36 acre (145,000m²) which houses a part of the College of Engineering and Computing and is the home of FIU's Nanofabrication Research Facility. The Engineering Center is also serviced by the Golden Panther Express, FIU's student buses, which run throughout the day on weekdays connecting the two parts of campus.

There were 8,646 households out of which 27.1% had children under the age of 18 living with them, 55.3% were married couples living together, 15.2% had a female householder with no husband present, and 24.8% were non-families. 18.1% of all households were made up of individuals and 9.4% had someone living alone who was 65 years of age or older. The average household size was 2.96 and the average family size was 3.32.