The New Jersey Network, or NJN, was a network of public television and radio stations serving the U.S. state of New Jersey. NJN was a member of the Public Broadcasting Service (PBS) for television and the National Public Radio (NPR) for radio, broadcasting their programming as well as producing and broadcasting their own programming, mostly relating to issues in New Jersey. With studios in both Trenton and Newark, NJN's television network covered all of New Jersey, plus parts of Pennsylvania, New York, Connecticut and Delaware. The state radio network primarily serves several areas of New Jersey that were not covered by the Philadelphia and New York City public radio stations.

New Jersey Network ended operations on June 30, 2011. The television network was succeeded by NJTV, and the radio stations were split through two separate outright sales to different public broadcasting entities.

The system was founded in 1968 by an act of the New Jersey Legislature establishing the New Jersey Public Broadcasting Authority (NJPBA). New Jersey already had a public television station licensed within the state—WNET, licensed to Newark. However, for all practical purposes, WNET was a New York City station, effectively leaving New Jersey without a public station of its own. With state funding and four UHF licenses assigned years earlier by the Federal Communications Commission, the NJPBA went to work building the state's public television stations. The first station, WNJT in Trenton, went on the air April 5, 1971, with the other three stations signing on over the next two years. The system was known on-air as New Jersey Public Television (NJPTV) until 1981, when it adopted the New Jersey Network identity.

Due to New Jersey being split between the New York City and Philadelphia markets, NJN's television network reached viewers in parts of five states. While this gave NJN one of the largest potential audiences in the country, it also forced it to compete directly with three of the highest-rated PBS stations in the nation—WNET, secondary New York City member station WLIW, and WHYY-TV in the Philadelphia area. NJN spent most of its existence searching to carve out a niche of its own.

One of its solutions had been to air some of the more popular PBS shows on a delayed basis. Another solution has been to focus its efforts on its news operation. The latter worked very well, as NJN and its reporters won many awards for their journalistic efforts. In the 1980s, NJN was the first media outlet to break the "Taggart Affair" political patronage scandal. NJN's newscasts and public affairs programming were co-produced (initially) and simulcast on WNET for that station to fulfill its licensing commitment to Newark.

NJN's radio network began operation May 20, 1991, when WNJT-FM in Trenton signed on;[1] eight other stations would be established over the following seventeen years.

In 2008, in the face of a proposed 35 percent cut in funding, NJN officials asked the state legislature for permission to become an independent nonprofit entity. Under this proposal, the state network would likely be transferred to its nonprofit fundraising arm, the NJN Foundation. Two consultants looking into fundraising options say that breaking off from the state would trigger an avalanche of private funding.[2]

After assuming the office of New Jersey Governor in 2010, Chris Christie voiced his support for transforming NJN into a not-for-profit organization in his March 2010 budget speech.[3] On October 15, 2010, a bipartisan legislative task force called for a "dramatic reconfiguration" of the state network, but not full privatization. Christie nonetheless moved forward with plans to remove state funding.[4] On November 17 NJN handed layoff notices to 130 workers, leading to speculation that the state network would shut down on January 1, 2011, when funding from the state would end.[5] On December 17, 2010, Gov. Christie signed legislation for transferring the state network to independent funding. The legislation also suspended layoffs.[6]

On June 6, the split of NJN's radio and television operations was announced by Gov. Christie. They were as follows:[7][8]

On June 23 the New Jersey State Assembly voted, 45 to 30, in favor of rejecting the WNET/Caucus proposal for transfer of control of the NJN television stations.[11] The state Senate, however, passed the resolution on June 27 by a 20 to 19 margin, allowing the deal to go into effect as scheduled on July 1. [12] All 130 NJN employees were either laid off or reassigned, or retired as a result of the system's closure.[13]

The NJN television stations were: 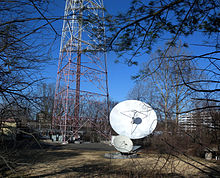 The four NJN stations shut down their analog signals on June 12, 2009,[14] as part of the DTV transition in the United States. Each of the four NJN stations remained on their pre-transition digital assignments[15][16][17][18] using PSIP to display virtual channels for each NJN station corresponding to their former analog channel numbers.

Unlike its television counterpart, NJN Radio covered mainly southern New Jersey, with only two transmitters in the northern part of the state. Due to the crowded state of the noncommercial end of the FM dial in the northeastern United States, the nine stations all operate at relatively low power. Much of the programming came from NPR, with a simulcast of the audio of the television network's NJN News following All Things Considered.