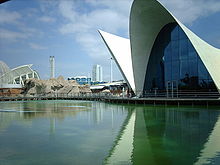 A concrete shell, also commonly called thin shell concrete structure, is a structure composed of a relatively thin shell of concrete, usually with no interior columns or exterior buttresses. The shells are most commonly flat plates and domes, but may also take the form of ellipsoids or cylindrical sections, or some combination thereof. The first concrete shell dates back to the 2nd century.

Most concrete shell structures are buildings, including storage facilities, commercial buildings, and residential homes. Concrete shell construction techniques are well suited for complex curves and are also used to build boat hulls (called ferroconcrete). Historically, it was used by the British to create the Mulberry Harbours for the 1944 D-Day invasion of Normandy.

Like the arch, the curved shapes often used for concrete shells are naturally strong structures, allowing wide areas to be spanned without the use of internal supports, giving an open, unobstructed interior. The use of concrete as a building material reduces both materials cost and construction costs, as concrete is relatively inexpensive and easily cast into compound curves. The resulting structure may be immensely strong and safe; modern monolithic dome houses, for example, have resisted hurricanes and fires, and are widely considered to be strong enough to withstand even F5 tornadoes.

Since concrete is a porous material, concrete domes often have issues with sealing. If not treated, rainwater can seep through the roof and leak into the interior of the building. On the other hand, the seamless construction of concrete domes prevents air from escaping, and can lead to buildup of condensation on the inside of the shell. Shingling or sealants are common solutions to the problem of exterior moisture, and dehumidifiers or ventilation can address condensation.

The oldest known concrete shell, the Pantheon in Rome, was completed about AD 125, and is still standing. It has a massive concrete dome 43m in diameter, with an oculus at its centre. A monolithic structure, it appears to have been sculpted in place by applying thin layers on top of each other in decreasing diameter. Massively thick at the bottom and thinning (with aerated volcanic pumice as part of the concrete mix) at the top, the Pantheon is a remarkable feat of engineering.

Modern thin concrete shells, which began to appear in the 1920s, are made from thin steel reinforced concrete, and in many cases lack any ribs or additional reinforcing structures, relying wholly on the shell structure itself.

Shells may be cast in place, or pre-cast off site and moved into place and assembled. The strongest form of shell is the monolithic shell, which is cast as a single unit. The most common monolithic form is the dome, but ellipsoids and cylinders (resembling concrete Quonset huts / Nissen huts) are also possible using similar construction methods.

Monolithic domes are cast in one piece out of reinforced concrete and date back to the 1960s. Advocates of these domes consider them to be cost-effective and durable structures, especially suitable for areas prone to natural disasters. They also point out the ease of maintenance of these buildings. Monolithic domes can be built as homes, office buildings, or for other purposes.

The Seattle Kingdome was the world's first (and only) concrete-domed multi-purpose stadium. It was completed in 1976 and demolished in 2000. The Kingdome was constructed of triangular segments of reinforced concrete that were cast in place. Thick ribs provide additional support.