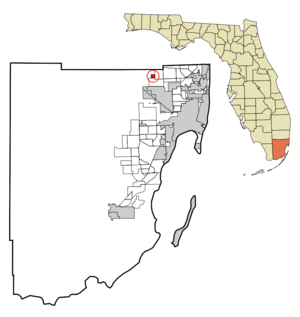 There were 1,630 households out of which 43.3% had children under the age of 18 living with them, 72.5% were married couples living together, 11.2% had a female householder with no husband present, and 11.1% were non-families. 8.3% of all households were made up of individuals and 3.1% had someone living alone who was 65 years of age or older. The average household size was 3.33 and the average family size was 3.49.

As of 2000, Palm Springs North had the eleventh highest percentage of Cuban residents, with 43.59% of the population, [cite web |url=http://www.epodunk.com/ancestry/Cuban.html |title=Ancestry Map of Cuban Communities |publisher=Epodunk.com |accessdate=2007-11-07] while it had the sixty-third highest percentage of Colombians, at 2.36% of all residents. [cite web |url=http://www.epodunk.com/ancestry/Colombian.html |title=Ancestry Map of Colombian Communities |publisher=Epodunk.com |accessdate=2007-11-07]

The origin of the name Palm Springs North is due to the large amount of natural springs on which the town sits, giving life to the many different species of animal and fish that reside in its lakes, as well as a large abundance of thriving vegetation. Palm Springs North is usually referred to as P.S.N. by its residents.