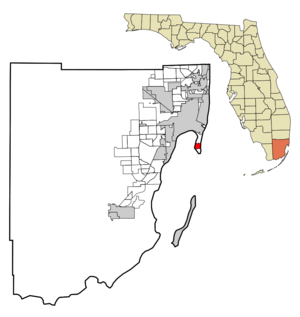 Key Biscayne is a village in Miami-Dade County, , on the island of . The population was 10,507 at the 2000 census. As of 2004, the population recorded by the is 10,324. [http://www.census.gov/popest/cities/tables/SUB-EST2004-04-12.xls] Key Biscayne is located on the island of Key Biscayne and lies south of and east of . The Village is connected to via the , originally built in 1947. Because of its low elevation and direct exposure to the Atlantic Ocean, it is usually among the first areas to be d before an oncoming .

The Village is bordered on the north by , Miami-Dade County park, on the south by , on the east by the and on the west by .

While there had been earlier schemes to develop a town on Key Biscayne, it wasn't until the opening of the four-mile (6 km) long from Miami to and on to Key Biscayne in 1947 that the island was opened up to large scale residential development. The northern two-thirds of the island had been operated as the largest plantation in the during the first half of the 20th century. In 1940 the Matheson family donated over convert|800|acre|km2 of their land to Dade County for a public park (Crandon Park) in exchange for a commitment that the county would build a causeway to the island. The remaining Matheson property, stretching across the middle of the island, was then sold off to developers. Starting in 1951, the Mackle Construction Company offered new homes on the island for US$9,540, with just US$500 down. A U.S. Post Office contract branch was opened, the Community Church started holding services in an old coconut-husking shed, and the Key Biscayne Elementary School opened in 1952. [Blank. pp. 159-162.]

The southern third of Key Biscayne, which included Cape Florida, was owned by and, after his death, by his brother Charles, for 35 years. In 1948 José Manuel Áleman, a n politician in exile, bought the Cape Florida property from the Deering estate. After Áleman died in 1951, his widow, Elena Santeiro Garcia, added to her Cape Florida property by buying an ocean-to-bay strip that had been part of the Matheson property. This strip included a canal that had been dug by William Matheson in the 1920s, and which extended from the bay across most of the island. The land north of this canal was developed as part of what is now the Village of Key Biscayne. Garcia sold the Cape Florida property in 1966 to the state of Florida. This land became Bill Baggs Cape Florida State Park, which opened , . [Blank. pp.166-171.]

President purchased the first of his three waterfront homes, forming a compound known as the , in 1969 to be close to his close friend and confidant, Bebe Rebozo and industrialist (inventor of the modern spray can valve). Bebe Rebozo, owner of the Key Biscayne Bank, was indicted for laundering a $100,000 donation from to the Nixon election campaign. President Kennedy and Nixon met for the first time after the 1960 Election loss by Nixon in an oceanfront villa at the old Key Biscayne Hotel. Plans for the Watergate break-in at Democratic headquarters were discussed at the Key Biscayne Nixon compound and, as the Watergate scandal unfolded, Nixon spent more time in seclusion there. Nixon visited Key Biscayne more than 50 times between 1969 and 1973. The spent $400,000 constructing a helicopter landing pad in adjacent to the Nixon compound and when Nixon sold his property, including the helicopter pad, there were public accusations that he enriched himself at taxpayer expense.

The area was incorporated as a new municipality in 1991 - the first new city in Miami-Dade County in over fifty years. Rafael Conte was elected the first mayor along with members of the founding Village Council including Clifford Brody, Mortimer Fried, Michael Hill, Luis Lauredo, Joe Rasco, and Raymond Sullivan. The municipality's first manager was C. Samuel Kissinger and the first clerk was Guido Inguanzo. The incorporation of the Village provided local control over taxes and future development.

In 1992, flooded some homes and businesses on Key Biscayne but the eye wall passed over uninhabited Bill Baggs Cape Florida State Park which received the brunt of the storm. The storm damage was a blessing for the park because it destroyed all the non-native vegetation that the state had been trying to eradicate. Federal and State funding allowed the replanting with native vegetation making the park a showplace natural area. In recent years the construction of several large resort hotels, condominium complexes and shopping centers on the island as the once bucolic island life continued to accelerate at a frenetic pace. The Village has its own fire, police and a newly expanded public elementary and middle school. The tax rate remains the lowest of any municipality in Miami-Dade County. The Village has just completed a new civic center including fire, police and administration buildings and a well appointed recreation and community center with indoor multi use courts, outdoor swimming pool and a renowned musical theater program.

Key Biscayne increasingly caters to an elite population of business moguls, high-income professionals, and a significant influx of Latin American tourists and part-time residents fleeing political and economic instability in their home countries.Fact|date=February 2007

There were 4,259 households out of which 32.3% had children under the age of 18 living with them, 58.0% were married couples living together, 7.7% had a female householder with no husband present, and 31.9% were non-families. 27.9% of all households were made up of individuals and 9.5% had someone living alone who was 65 years of age or older. The average household size was 2.47 and the average family size was 2.99.

*Key Biscayne was also the Florida home of former during his stay in office.
*There is now an annual Key Biscayne "regatta" similar to the at Elliot Key where several dozen boats meet at the sandbar for a day of drinking.
*Key Biscayne also hosts the , home to the Sony Ericsson Open Tennis Tournament, and a golf course, along with many amenities for water sports and fishing.