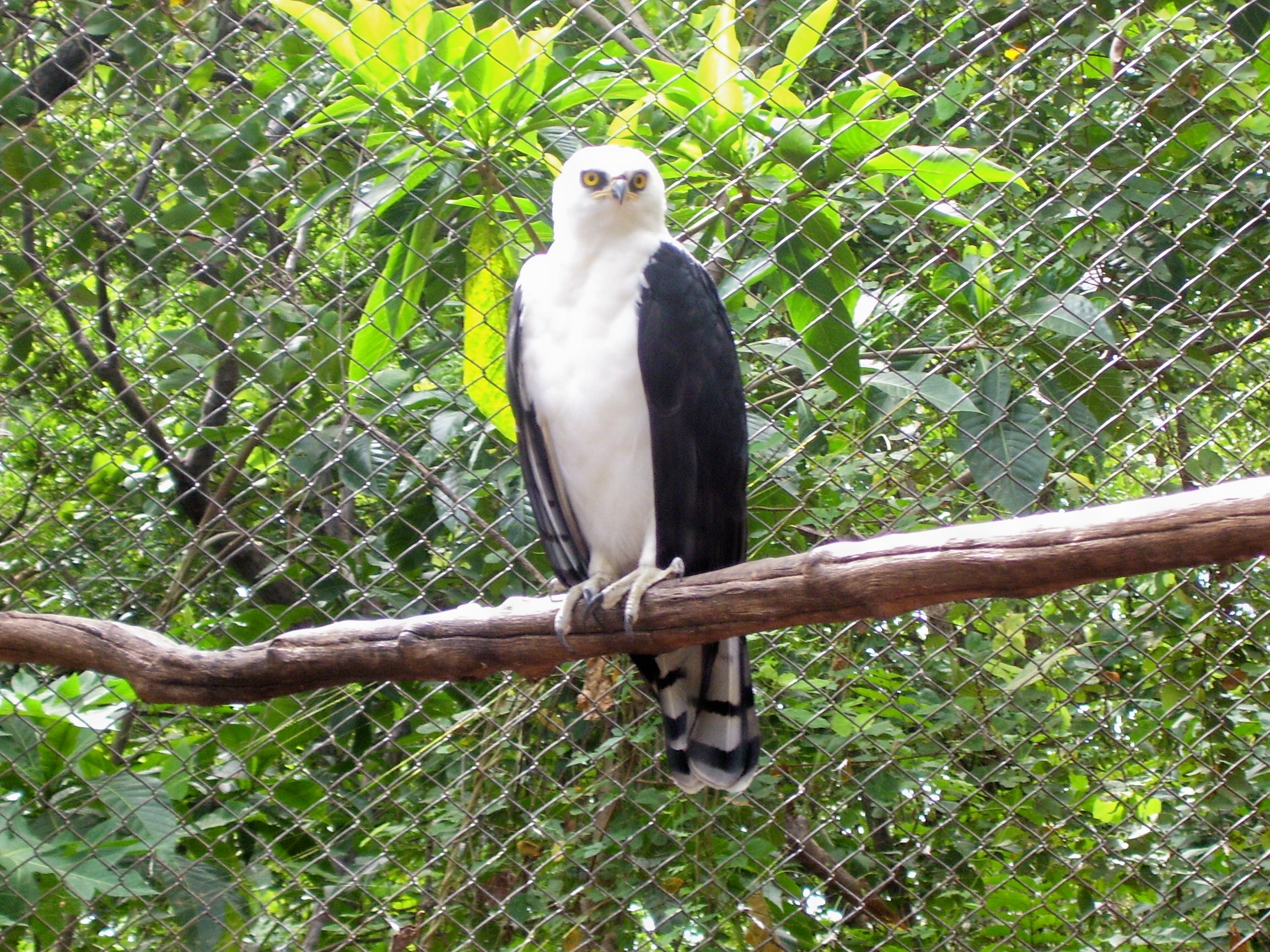 The Black-and-white Hawk-eagle ("Spizaetus melanoleucus", formerly "Spizastur melanoleucus") is a in the and family (). It is found throughout a large part of America, from southern to northern .

As its name suggest, this is a black and white eagle, resembling the small typical eagles sometimes separated in "". It is some 20-24 in (50-60 cm) long overall and weighs about 30 oz (850 g). The head, neck and body are white; a small crest forms a black spot on top of the head, and the area around the eyes, particularly towards the bill, is also black. The wings are black, and the bird has a brownish tail barred black-dark grey and with white tip. The iris is orange, the feet pale to bright yellow with black talons. The bill is black with a yellow .

The sexes are alike in color, but the female is larger. Immature birds have pale edges on the upperwing coverts and some brownish-grey feathers on the back.

The Black-and-white Hawk-eagle is hard to confuse with any other bird in its range. The ("Leucopternis melanops") is very similar in overall coloration, but it is much smaller and has a black tail with a single bold white bar in the middle. The ("Spizaetus ornatus"), presumably a very close relative of "S. melanoleucus", looks quite similar when young. However, the wings, back and tail are much lighter in young "S. ornatus", and they do not have the black eye-ring.

This species occurs from to in southern southwards throughout , with the exception of most of and the coast of . In , it occurs on the Pacific side of the south to . The bulk of its range extends along the coast from northern and to the , and south through eastern , and to NE , and from there westwards again to Beni and Santa Cruz in NE . A Black-and-white Hawk-eagle population is also found in the of NE ; it is not known in how far this is isolated from the rest of the bird's range. The species is absent from western .

Its natural s are lowland s of any type, though very dense and as well as -like habitat are not preferred. Its range does not extend very far into the uplands, but one individual was sighted at an altitude of about 4,000 ft (c.1,200 m) ASL in the in Colombia's . [Bierregaard (1994b), Strewe & Navarro (2004)]

The food of this consists of s, s, s and in particular a wide variety of birds. Among the latter, it is known to prefer tree-living species, such as s, s, s and s. But ground- and waterbirds like s, s, s and the highly threatened ("Mergus octosetaceus") have also been recorded as its prey. The Black-and-white Hawk-eagle has been known to attack small monkeys, though it is not clear with which intent. For as it seems, it has not been recorded to actually kill and eat a monkey.

Its preferred hunting technique is to soar high until it has spotted suitable prey, and then dive down on it, usually right into the , but it has also been observed to catch a ("Melanerpes candidus") that had been mobbing it in mid-air, after lauching itself from its perch [Olmos "et al." (2006)] . It likes to hunt along ridges and forest edges where it can access the canopy-level from an direction rather than just from directly above, and where ground-living prey is also more accessible.

It nests in the forest canopy, building a stick nest high up in exposed trees on ridges and similar locations, from where good hunting grounds can be watched. Detailed observations on its nesting habits are nearly non-existent however. In , birds started to construct a nest in September, during a dry spell in the . But the main nesting season may start before the onset of the rainy season as the nesting attempt was abandoned when heavy rains recommenced. The scant other data agrees with this, and at least in Central America the nesting season seems to run from March to June or so.

There is a general lack of information on the Black-and-white Hawk-eagle's movements and population status. Each bird seems to require a hunting territory of about 3,500 acres (1,400 hectars) at least. While the variety of habitat types in which it is found suggests that it is not particularly susceptible to changes in land use, it is apparently still a rare and local species almost anywhere in its range. The until 2000 classified it as a species due to the uncertainties surrounding its status, but as no evidence of a marked decline has been found and as the bird is found across a wide range, it was downlisted to a Species of . [Bierregaard (1994b), BLI (2004), Strewe & Navarro (2004), Olmos "et al." (2006)]

This species is often placed in the genus "Spizastur", but has recently been moved to "" e.g. by the , as it appears that the ("S. ornatus") is its [Banks "et al." (2007)] . This has created quite some confusion, which has largely gone unnoticed however:

Thus, the identical s never came into direct conflict until recently. But the Black-chested Eagle-buzzard's placement in a monotypic genus was always disputed, and several authors treated it in "Buteo" [E.g. Wetmore (1933)] . However, they overlooked that "Buteo melanoleucus" was the original name of the Black-and-white Hawk-eagle and thus as a could not be applied to the later-described species. The correct for the Black-chested Eagle-buzzard when placed in "Buteo", "Buteo fuscescens", was reestablished in the mid-20th century for a short time more by accident than anything else; as most late-20th-century researchers argued for retaining "Geranoaetus", this name was dismissed as erroneous and essentially forgotten [Amadon (1963)] .

More recent evidence suggests that "Geranoaetus" may indeed well warrant merging into "Buteo"; some authors are already applying this change. But usually the incorrect name "Buteo melanoleucus" is used for the Black-chested Eagle-buzzard in such cases [E.g. Amorim & de Queiroz Piacentini (2006)] , as the researchers who brought fourth the new data in favor of a merger were also unaware of the homonymy.