Amalgam is an alloy containing mercury. The amalgam used as material for dental fillings is a mixture of mercury (50%), silver (~22-32% ), tin (~14%), copper (~8%), and other trace metals.[1] Amalgam became the restorative material of choice due to its low cost, ease of application, strength, and durability.

Recently however, it's popularity has diminished somewhat. Concern for aesthetics, environmental pollution, and the availability of improved, reliable, composite materials have all contributed. In particular, concerns about the toxicity of mercury have made it's use increasingly controversial. Due to a worldwide plan to phase out the use of mercury, Norway, Denmark, and Sweden have deliberated in 2009 a ban of mercury dental amalgam in their countries.

In 1833 the Crawcour brothers, two Frenchmen, brought amalgam to the United States, and in 1844 it was reported that fifty percent of all dental restorations placed in upstate New York consisted of amalgam.[2] However, at that point the use of dental amalgam was declared to be malpractice, and the American Society of Dental Surgeons (ASDS), the only US dental association at the time, forced all of its members to sign a pledge to abstain from using the mercury fillings.[3] This was the beginning of what are known as the first dental amalgam war.[4] 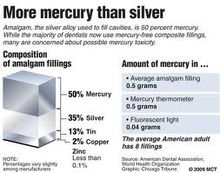 The war ended in 1856 with the rescission of the old association. The American Dental Association was founded instead in 1859, which has strongly defended dental amalgam since from allegation of being too risky from the health standpoint.[5]

The ratio of the mercury to the remaining metallic mixture in dental amalgam hasn't been always 50:50. It was as high as 66:33 in 1930. Relative ratios between the other metals used in dental amalgams has been also highly variable. Conventional (or gamma 2)-amalgams have 32% silver and 14% tin, and they are most susceptible to corrosion due to their low copper content. Non-gamma-2 dental amalgams have been developed that however were found to release higher levels of mercury vapor compared with traditional amalgams. Amalgam is the dental material that has the strongest tendency to create galvanic currents and high electric potentials as they age. The rate of mercury release with the corrosion is accelerated when the amalgam filling is in contact with old restorations or couples with gold artifacts present in the mouth.

Longevity and other advantages

Amalgam is "tolerant to a wide range of clinical placement conditions and moderately tolerant to the presence of moisture during placement".[6] In contrast, the techniques for composite resin placement are more sensitive to many factors and require "extreme care".[7]

Mercury has properties of a bacteriostatic agent whereas TEGMA (constituting some older resin-based composites) "encourages the growth of microorganisms".

Recurrent marginal decay is a very important factor in restoration failure, but more so in composite restorations. In the Casa Pia study in Portugal (1986–1989), 1,748 posterior restorations were placed and 177 (10.1%) of them failed during the course of the study. Recurrent marginal decay was the main reason for failure in both amalgam and composite restorations, accounting for 66% (32/48) and 88% (113/129), respectively.[8] Polymerization shrinkage, the shrinkage that occurs during the composite curing process, has been implicated as the primary reason for postoperative marginal leakage.[9][10]

These are some of the reasons why amalgam has remained a superior restorative material over resin-base composites. The New England Children's Amalgam Trial (NECAT), a randomized controlled trial, yielded results "consistent with previous reports suggesting that the longevity of amalgam is higher than that of resin-based compomer in primary teeth[6][11] and composites in permanent teeth.[6][12] Compomers were seven times as likely to require replacement and composites were seven times as likely to require repair.[6]

There are circumstances in which composite serves better than amalgam. For example, when a more conservative preparation would be beneficial, composite is the recommended restorative material. These situations would include small occlusal restorations, in which amalgam would require the removal of more sound tooth structure,[13] as well as in "enamel sites beyond the height of contour."[14] For cosmetic purposes, composite is preferred when a restoration is required on an immediately visible portion of a tooth.

Norway, Sweden and Denmark have already implemented a total mercury ban[citation needed], and all other industrialized countries are following their lead with the same focus on the principle of precaution and the principle of substitution but a slightly longer path.[citation needed] "Satisfactory alternatives to mercury in products are available, and it is therefore fitting to introduce a ban," said Norwegian Minister of the Environment Erik Solheim. "Composite fillings have now become so strong that the Danish National Board of Health says that we can expand the ban to also include amalgam fillings", said the (Danish) Minister of Health Jakob Axel Nielsen to TV Avisen.[15]

Controversy over the mercury component of dental amalgam dates back to its inception, when it was opposed by the United States dental establishment,[clarification needed] but it became a prominent debate in the late 20th century, with consumer and regulatory pressure to eliminate it "at an all-time high".[16] Many[clarification needed] people are unaware of the mercury in fillings,[17] and this lack of informed consent was the most consistent issue raised in a recent U.S. Food and Drug Administration panel on the issue by panel members.[16] Environmental concerns over external costs exist as well, as the use of dental amalgam is unregulated at the federal level in, for example, the United States.[18] The WHO reports that mercury from amalgam accounts for 5% of total mercury emissions and that when combined with waste mercury from laboratory and medical devices, represents 53% of total mercury emissions.[19] Separators may dramatically decrease the release of mercury into the public sewer system, where dental amalgams contribute one-third of the mercury waste,[19] but they are not required in the United States.[20] As of 2008, the use of dental amalgam has been banned in Norway,[21] restricted in Sweden and Finland, and a committee of the US Food and Drug Administration (FDA) has refused to ratify assertions of safety.

In the 1990s, several governments evaluated the effects of dental amalgam and concluded that the most likely health effects would be due to hypersensitivity or allergy. Germany, Austria, and Canada recommended against placing amalgam in certain individuals such as pregnant women, children, those with renal dysfunction, and those with an allergy to metals. In 2004, the Life Sciences Research Office analyzed studies related to dental amalgam published after 1996. Concluding that mean urinary mercury concentration (μg of Hg/L in urine, HgU) was the most reliable estimate of mercury exposure, it found those with dental amalgam were unlikely to reach the levels where adverse effects are seen from occupational exposure (35 μg HgU). 95% of study participants had μg HgU below 4-5. Chewing gum, particularly for nicotine, along with more amalgam, seemed to pose the greatest risk of increasing exposure; one gum-chewer had 24.8 μg HgU. However, from reviewing medical literature, the World Health Organization states mercury levels in biomarkers such as urine, blood, or hair do not represent levels in critical organs and tissues. Additionally, Gattineni et al. found that mercury levels do not correlate with the number or severity of symptoms. It concluded that there was not enough evidence to support or refute many of the other claims such as increased risk of autoimmune disorders, but stated that the broad and nonspecific illness attributed to dental amalgam is not supported by the data.[22] Mutter in Germany, however, concludes that "removal of dental amalgam leads to permanent improvement of various chronic complaints in a relevant number of patients in various trials."[23]

There is strong evidence that a certain percentage of lichenoid lesions are caused by amalgam fillings.[24]