The Latvian Orthodox Church (Latvian: Latvijas Pareizticīgā Baznīca, Russian: Латвийская Православная Церковь) is a self-governing Eastern Orthodox Church under the jurisdiction of the Patriarchate of Moscow. The primate of the church carries the title of Metropolitan of Riga and all Latvia (Latvian: Rīgas un visas Latvijas metropolīts; Russian: Митрополит Рижский и всея Латвии). This position has been occupied since October 27, 1990 by Metropolitan Alexander (Kudryashov) (Aleksandrs Kudrjašovs).

Orthodoxy was planted in Latvia in the 11th century, when it became a mission field of the diocese of Polotsk. But the country remained mostly pagan until it was conquered in the 13th century by German crusaders - the Teutonic Order, who were elective of Catholicism. Orthodox presence continued in the form of churches for Russian merchants and others, but these were small communities among a majority of Catholics before 1525 and Lutherans afterward. After Latvia was annexed to the Russian Empire in the 18th century (most of Latvia, a result of the Great Northern War by the Treaty of Nystad, the Latgale region after the First Partition of Poland in 1772), Russian and Orthodox presence increased substantially, but the Orthodox Church remained foreign to the Latvians. The Latvian Orthodox Church as a body including ethnic Latvians as well as Russians dates back to the 1840s, when native Latvians (who were at that time subjects of the Russian Empire) petitioned the Czar to be allowed to conduct services in their native tongue. The Orthodox Church enjoyed some success in its missions among the Latvians due to its use of the Latvian language. In the 1880s Orthodox Nativity Cathedral was built in Riga. However, it was always regarded suspiciously by the Lutheran Germanic nobles of the area; conversely the predominantly German character of the Lutheran Church in Latvia was a factor in the movement of some 40,000 Latvians from the Lutheran to the Orthodox Church. When religious freedom was proclaimed in 1905, about 12,000 Latvians moved in the opposite direction, from Orthodoxy to Lutheranism; in most cases this seems to have occurred because of mixed marriages and the difficulties of maintaining a religiously divided family. 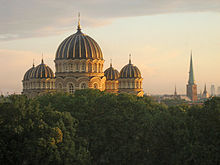 The domes of Nativity Cathedral are a landmark of the Riga cityscape.

During World War I, the property of the Orthodox Church in Latvia was confiscated by occupying German forces, and in the early years of independent Latvia the government was not eager to recognize the church, suspecting it of being a hotbed of czarism. In this difficult — one might say desperate — situation, Jānis (Pommers), a native Latvian, was appointed Archbishop of Riga in 1921. He succeeded in winning recognition from the government by 1926 and, against much opposition from leftists and others, in stabilizing the situation of the church. While opposing the Bolsheviks, he maintained the Latvian Orthodox Church within the Moscow Patriarchate. In 1934, he was brutally assassinated by Soviet agents. In the following year, the Latvian Orthodox Church became autocephalous under the auspices of the Patriarch of Constantinople. The subsequent five years were good years for the Latvian Orthodox Church, led by Metropolitan Augustin (Pētersons); they were ended abruptly by the Soviet annexation of Latvia in 1940, which was followed by German Nazi occupation from 1941 to 1944, and a second Soviet annexation lasting from 1944 to 1991. The church suffered oppression during this period, as did organized religion throughout the Soviet Union, which was partly mitigated from 1943 to 1958 and in the last years of the Soviet Union under Mikhail Gorbachev.

In 2001 a council of the Latvian Orthodox Church canonised Archbishop Jānis in recognition of his heroic martyrdom in 1934.[1] In 2006 the Order of the holy martyr Jānis was instituted to reward those who have served the Orthodox Church and its aims.[2]

In modern Latvia, there are 350,000 Orthodox Church members.[3] The vast majority of them are ethnic Russians and other immigrants living in Latvia.

The Church plays a major role in "The Conversion" episode of the popular American television sitcom Seinfeld. The writer of the episode, Bruce Kirschbaum, later revealed that he was unaware when he wrote it that such a church actually existed.[4]