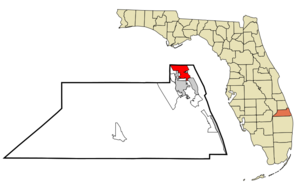 mapsize = 250x200px
map_caption = Location in Martin County and the state of

There were 5,059 households out of which 23.8% had children under the age of 18 living with them, 47.2% were married couples living together, 8.8% had a female householder with no husband present, and 40.2% were non-families. 33.2% of all households were made up of individuals and 17.6% had someone living alone who was 65 years of age or older. The average household size was 2.19 and the average family size was 2.78.

The Beach in Jensen Beach

The main public beach in Jensen Beach is on Hutchinson Island, called "Jensen Sea Turtle Beach". It's a wide sandy beach on the . The beach is staffed by Martin County life guards and is a great spot for sun bathing, surfing, and swimming. Sections of the beach where sea turtles lay their eggs are blocked off. Jensen Beach is well known in the marine biology community for being a prime location for sea turtles to nest.

Designated sections of the Jensen Sea Turtle Beach are barricaded off in order to protect the nests of the beloved sea turtles that inhabit the warm waters. The three popular species found on this beach are the , and . Loggerhead nests are by far the most common type found on this and adjacent beaches. Locations of the sea turtle’s nests are marked with the approximate date in which the eggs were laid and the expected date in which the eggs will hatch. These notifications are meant to encourage tourists and residents to refrain from visiting the beach in the evening hours during these time periods. Great efforts are made to protect both species of sea turtles since nests have been declining in recent years due to the severe erosion of the beach.

In 1879, Capt. Thomas E. Richards established his homestead at Eden, planting slips on his plantation. The slips flourished, and the pineapple industry was born. John Laurence Jensen, an immigrant from Denmark, arrived in 1881, and set up his pineapple plantation, which became the town of Jensen.

Capt. Richards had the largest pineapple plantation on the Indian River. The fruit was packed in barrels and boxes at the packing house, loaded on riverboats, and transported to Titusville, the southern terminus of Flagler’s (FEC). By 1894, the FEC reached Jensen Beach, and freight shipments were loaded directly onto the freight cars.

By 1895, Jensen was called the “Pineapple Capital of the World,” shipping over one million boxes of pineapples each year during the June and July season. To help deal with the increased Pineapple production, a Pineapple Factory was built.

Unfortunately, a hard freeze in 1895 devastated most of the small pineapple plantations. Also, two fires, 1908 and 1910, destroyed most of Jensen Beach and its remaining Pineapple farms. The industry finally collapsed in 1920 due to a wide variety of financial and agriculture problems. Growers decided to turn their efforts in another direction: raising citrus.

Today, the legacy of this tropical fruit lives on; the pineapple has become a symbol of Jensen Beach. The fruit legacy is celebrated annually during the Jensen Beach Pineapple Festival.

Downtown Jensen Beach is the site of the annual .

in Jensen Beach is the school of the 2006 Florida Teacher of the Year, Connie Dahn.

All Saints Episcopal Church erected in 1898 is the oldest church building in Jensen Beach as well as in Martin County. Adjacent to the church is All Saints Cemetery which is non-sectarian and serves the whole community.

Waveland was the original name for the area from Crossroads Hill (south of N.E. Center Street) south to the tip of Sewall's Point and west to Warner Creek. "Jensen" originally meant the area immediately adjacent to today's Downtown Jensen Beach.

Jensen Beach has been the of in since July 1989. [cite web|publisher=The Islands Of The Bahamas|url=http://www.bahamas.com/bahamas/island/templrgstandard.aspx?sectionid=91348&level=2|title=Eleuthera, Harbour Island|accessdate=2007-07-16]

Jensen Beach is a part of the which derives its name from the ships that wrecked during the 17th century because of coral reefs in the shallow waters. Artifacts and treasures from these ships of Spanish origin can still be discovered today.

The Skyline Drive area is among the highest points in south Florida.