The Flats
For the film, see The Flats (film). 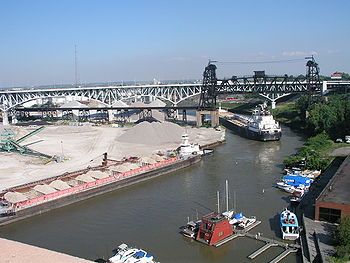 The Cuyahoga River and the industrial flats.

The Flats is a mixed-use industrial, entertainment, and increasingly residential area of Cleveland, Ohio, USA. The name reflects its low-lying topography on the banks of the Cuyahoga River.

In 1796, Moses Cleaveland and his survey party landed on the banks of the Cuyahoga upon their arrival from Connecticut. Early settlers included Lorenzo Carter, whose land holdings included much of what makes up today's East Bank entertainment district, including Whiskey Island, which was created when the mouth of the river was straightened by the Corps of Engineers. A log cabin on Merwin Road near Center Street on the East Bank is a recreation of Carter's house, which was further upstream.

Early residents found the Flats inhospitable, with humid summers that brought airborne illness and harsh winters with strong winds and snowfall off Lake Erie. Many took to higher ground in current-day Downtown. These settlers often relied on local Native American residents who lived on the West Bank and were more adept at living in the area.

Cleveland developed slowly until the arrival of the Ohio and Erie Canal, which brought a trade route from the Ohio River and other southern Ohio cities. The heavily Irish immigrant workforce that built the canal took residence on the West Bank of the Flats and neighboring Ohio City.

Ohio City's rise, fueled by the produce that flowed from Medina County farms along U.S. 42 to the West Side Market, was soon viewed as a threat to Cleveland's development. In response, Cleveland destroyed its half of a floating bridge at Main Street (located near the Cleveland Memorial Shoreway crossing) which was the sole river crossing. Cleveland then built a new bridge further downstream which connected Cleveland Mayor John W. Willey and developer/friend Jas Clark's "Willeyville" and "Cleveland Centre" developments along the newly constructed Columbus Road. The new bridge diverted the produce trade from the West Side Market to the new Central Market. Infuriated Ohio City residents, rallying with the cry of "Two bridges or none," marched on the new bridge with guns, axes, and other tools. They met a mob of Cleveland residents ready to fight; the ensuing "Bridge War" was put down by county sheriff's officers. The courts ultimately forced Cleveland to rebuild its half of the Main Street Bridge, but the damage had been done, and Ohio City soon became the first area to be annexed by the larger city.

A recession in the mid-19th century caused the Cleveland Centre mixed commercial and residential plan to collapse, and the land was purchased by industrialists connected to the canal and growing railroad lines. By this time, the Flats had become known as an unsavory place. The cities' poor Irish lived along the West Bank in the "Irish Ghetto" near the intersection of Columbus, Carter, Franklin, and Riverbed Roads. Shipmen would find services at establishments like the "Flat Iron", the oldest Irish Bar in the Flats, which was originally a three-story cafeteria and inn. Lumberyards lined the river with freshly cut wood waiting to be shipped. John D. Rockefeller's Standard Oil Company on the East Bank was putting Cleveland on the map as an industrial power, even as the refineries were leaking oil into the Cuyahoga River.

The Flats' industrial legacy, however, would be defined by its steel mills, located along the river south of the Tremont neighborhood and west of the Slavic Village. The mills were the pillar of the city's economy and the largest consumer of water and electricity. The names have changed over the years, from Republic and J&L, to LTV to ISG to today's Mittal. Post-war recessions and production shifts to China and Europe hit the steel industry hard. Layoffs in the late 1970s forced many to find work elsewhere, or support from welfare programs. During this time, Cleveland, along with other industrial cities in the region like Youngstown, Pittsburgh, Detroit and Gary, had unaffectionately become known as the Rust Belt. LTV's repeated bankruptcies finally led to the closing their plants in 2000 (including Cleveland's plant), until investors formed ISG and resumed scaled-back operations.

The story was similar downstream. Over the second half of the 20th century, much of the industry and manufacturing in the Flats closed, leaving decaying buildings and persistent pollution. The chemical-clotted Cuyahoga River caught fire several times; most recently in 1969, which brought national attention to the city's environmental woes and led one year later to the formation of the Ohio and U.S. Environmental Protection Agencies. 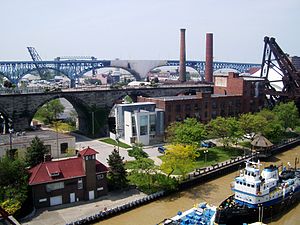 The west bank of the Flats, as seen from the lower deck of the Detroit-Superior Bridge 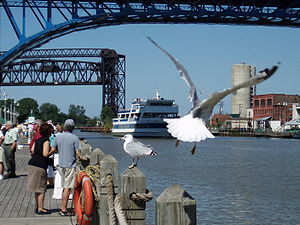 The Goodtime III tour boat heads up the Cuyahoga River, as seen from the west bank of the Flats

In the mid-1980s, the Flats saw a resurgence as an entertainment destination, a focal point of the renewed attention given to Cleveland's deteriorating downtown. Underground music venues appeared on the East Bank, while mainstream development first took place on the West Bank. The Powerhouse, built to power the city's cable cars, was renovated to include multiple bars, restaurants, and an outdoor music venue. Other warehouses and buildings were also renovated into nightlife destinations. At its peak in the early 1990s, the Flats had the highest concentration of bars in the Midwest with both locally owned bars and national restaurant chains lining both sides of the river from the mouth to the Oxbow bend. The Flats and Cleveland had soon become an entertainment mecca and destination for the region. The Flats Oxbow Association was formed to help redevelop the Flats, and housing development soon followed on both sides of the river, with new construction and warehouses being converted into condominiums and apartments.

The Flats' heyday as an entertainment destination was short-lived. Three drowning deaths in one month in 2000, along with a city crackdown on fire and health code violations led to the closing of many bars. Patrons becoming scared off due to safety concerns led to a sharp decrease in business. While this was a boon for the redevelopment for the Warehouse District, the area just up the hill from the East Bank, it sent shock waves through the Flats' redevelopment from which it has never fully recovered. Most of the East Bank has gone "dark" due to the number of businesses that have closed. Plans unveiled in the summer of 2005 include leveling most of these buildings and creating a new "neighborhood" that includes mixed use live/work spaces, a movie theatre, shopping, a grocery store and riverwalk. The developer, Scott Wolstein, has been able to settle with most of the property owners. However, some are refusing to settle, which has hindered some of Wolstein's development plans.

The West Bank has fared better than the East since 2000. While not anywhere near its pre-2000 peaks, it still has many establishments open, and has been home to the majority of housing developments in the Flats. New upscale condominiums have been constructed along the old Irishtown Bend and at the remains of the Superior Viaduct, which was the first high rise bridge to span the river. New shopping destinations have been constructed, like the Steelyard Commons, which is located on lands previously occupied by the steel mills and the new East Bank Redevelopment project which has begun demolition work. The canal's towpath trail, part of the Ohio & Erie Canal Corridor, is also being restored to provide jogging and bike trails for city residents and to preserve part of the Flats history. Whiskey Island has also been purchased by Cuyahoga County in hopes of making it more accessible to residents in the form of a lakefront park. The water quality of the river has also improved since 1970, with fish populations returning increasingly each year. This is largely due to the unintended importation of zebra mussels from Asia in the ballast of ships in the Port of Cleveland or some other port on Lake Erie, as well as less dumping of waste into the river.

After a number of years of delays due to the Great Recession, the Flats East Bank is presently undergoing Phase 1 of this mixed-use waterfront neighborhood. Phase 1 includes a 150-room high-tech boutique hotel, an 18-floor office building, and a number of restaurant and entertainment options.