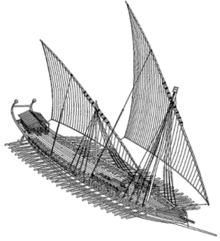 Reconstruction of an early 10th century Byzantine bireme dromon, based on the Tactica of Emperor Leo VI the Wise. Notice the lateen sails, the aft- and mid-castles, and the Greek fire siphon in front (bow).

The dromon (from Greek δρόμων, dromōn, i.e. "runner") was a type of galley and the most important warship of the Byzantine navy from the 6th to 12th centuries AD. It was indirectly developed from the ancient trireme and was usually propelled by both oars and sails, a configuration that had been used by navies in the Mediterranean Sea for centuries.

Literary sources and accounts reveal that there were at least three varieties of dromon, while the exact relation of the dromon proper with the chelandion, a term with which it is often used interchangeably, somewhat unclear. These were, firstly the ousiakon which took its name from one company or ousia of 100 men. This was a two-banked galley with the lower rank rowing only, and the upper rank rowing or disengaging to fight when required. Secondly the slightly larger pamphylos with a crew of between 120 and 160. Thirdly the dromon proper, which had a crew of 200: 50 on the lower bank, and 100 on the upper bank in two files, together with 50 marines.

The dromons had a central tower (xylokastron – Greek: "wooden castle") near the main mast, from which the marines could use their bows and arrows or throw spears and other projectiles. Dromons were frequently equipped with flamethrowers (siphones, and as such the ships were described as siphōnophoroi dromones) that discharged Greek fire and catapults capable of hurling 10 kg projectiles up to 250 meters.

Middle English dromond and Old French dromont are derived from the dromon, and described any particularly large medieval ship.[1]