The Oregon Constitutional Convention in 1857 drafted the Oregon Constitution in preparation for the Oregon Territory to become a U.S. state. Held from mid-August through September, 60 men met in Salem, Oregon, and created the foundation for Oregon's law. The proposal passed with a vote of 35 for adoption to 10 against. Oregon then became the 33rd state of the Union on February 14, 1859.[1]

In June 1846 the Oregon Question was decided with the United States gaining sole possession of all disputed land south of the 49th degree of latitude.[1][2] Afterward, on August 14, 1848, the United States government created the Oregon Territory, and in 1853 the northern and eastern sections of the territory became the Washington Territory.[3] In 1854 and 1855 bills in the Territorial Legislature pressing for statehood for the territory were defeated.[2] Then on December 12, 1856, the legislature passed a bill authorizing a convention to establish a constitution.[4] On June 1, 1857, the voters in the territory approved the resolution and elected delegates to a constitutional convention.[4] The vote was 7,209 in favor of holding a convention to 1,616 against the proposal.[5] 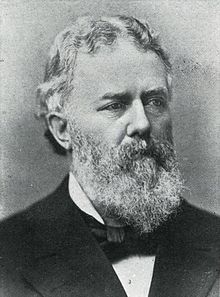 Matthew Deady, president of the convention

On August 17, 1857, 60 delegates selected by the voters met in Salem to write a state constitution in preparation of statehood.[2] This body then selected officers, set up rules (45 in total) for the meeting, and divided into committees on various subjects such as military, judicial, legislative, and elections.[4] At the Convention, Chester N. Terry was elected as the secretary of the group, while several people served at different times as the chairperson including William W. Bristow, Asa Lovejoy, Delazon Smith, and La Fayette Grover.[4] Judge Matthew Deady served as the president of the convention.[4] The group also settled a the debate over a disputed seat at the convention in favor of Perry B. Marple over F. G. Lockhart to represent Coos County.[4] Thirty-four of the delegates were farmers, while 18 were lawyers, including the three justices of the Oregon Supreme Court.[5] Two of the delegates were newspaper editors, five were miners, and another was a civil engineer.[6]

The main debates concerning a constitution revolved around slavery and the exclusion of Blacks, liquor laws, and what would be the boundaries of the new state.[2] After meeting for 31 days, the convention ended on September 18, when the delegates voted to approve the document as the constitution.[7] The final tally was 35 votes for passage and 10 against; 15 members of the convention were absent and did not vote.[2] The document was modeled after Indiana's 1851 Constitution and included a provision that denied the right to vote to “negro, Chinaman or mulatto” citizens in the state to be, and though female suffrage was discussed, women were also denied the right to vote.[6] The final draft submitted to the populace contained a total of 18 articles.[4] Over half of the document's content was derived in part from the Indiana constitution.[8]

All members of the convention and what county they represented:[9]

On November 9, 1857, the voters approved the document to serve as a state constitution upon statehood.[2] At this same vote, measures to allow slavery and to allow free Blacks to live in the state were defeated[10] after they had been submitted as separate items to vote on by the convention.[2][4] The vote to approve the constitution by the citizens of Oregon was 7,195 for the constitution and 3,215 against the document.[5] The vote on slavery was 2,645 to allow slavery and 7,727 to make it illegal, and the vote to make it illegal for Blacks to live in the state was 8,640 to ban them and 1,081 to allow them to live in the state.[5] All white men over the age of 21 were allowed to vote, and after the passage a delegation was sent east to Washington, D.C. to press for statehood.[7]

Oregon then waited on the United States Congress to accept the constitution and approve Oregon for statehood.[2] Due to the ongoing debate over slavery in the country as the nation approached the American Civil War, the U.S. Senate did not pass legislation to bring Oregon into the Union until 1859, when Oregon became the 33rd state on February 14.[2] The Oregon Constitution was not altered until 1902.[2]