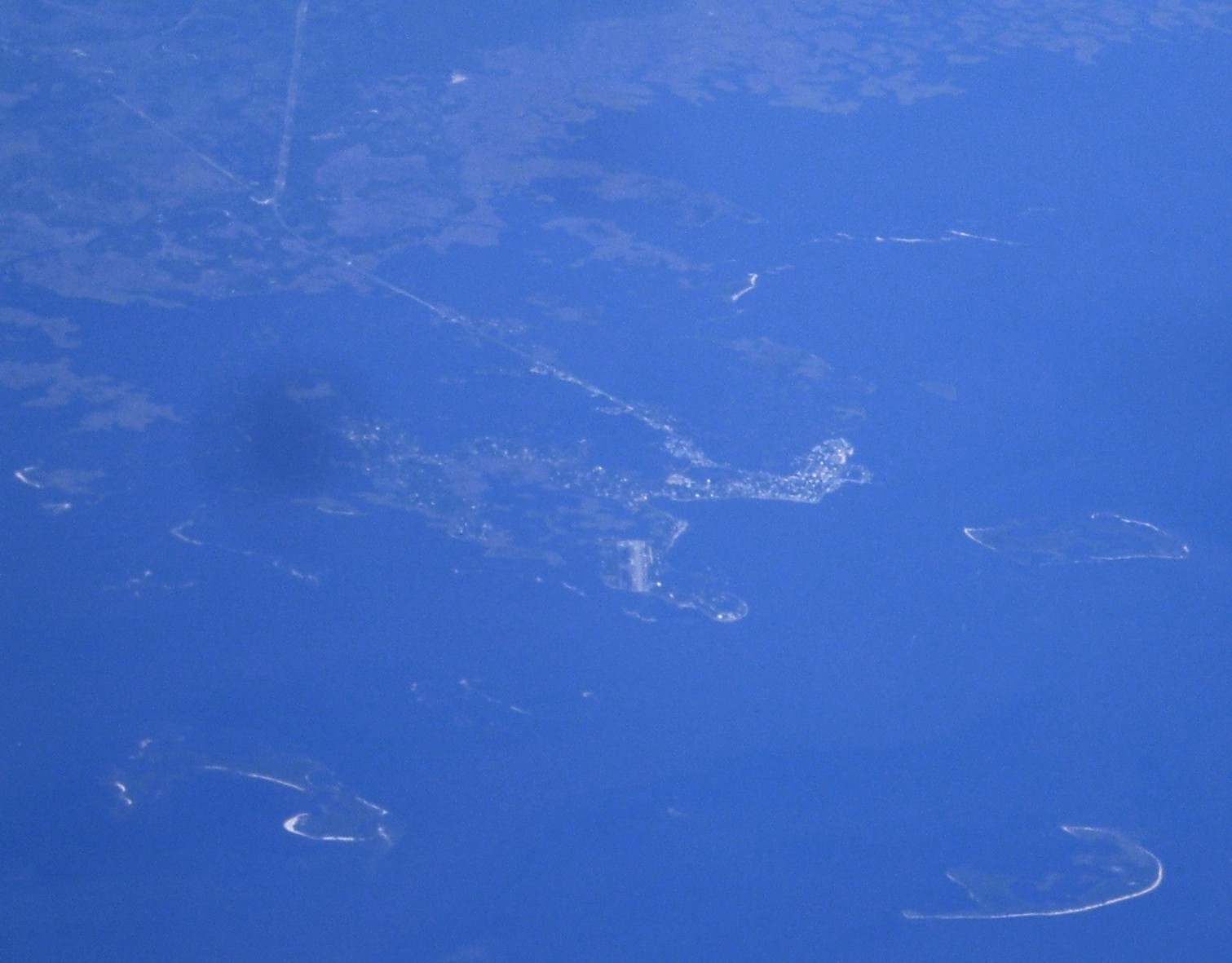 imagesize = 250x200px
image_caption = Aerial view of Cedar Key and its outlying islands, illustrating the extremely small size of the city. The fork at State Roads 24 and 347 (the only two access roads) can be seen in the upper left.

mapsize = 250x200px
map_caption = Location in Levy County and the state of

Cedar Key is a city in Levy County, , . The population was 790 at the 2000 census. According to the U.S Census estimates of 2005, the city had a population of 958. [ [http://www.census.gov/popest/cities/tables/SUB-EST2005-04-12.csv US Census Bureau: Florida Population estimates-2001/2005] ] The Cedar Keys are a cluster of islands close to the mainland. Most of the developed area of the city has been on Way Key since the end of the 19th century. The Cedar Keys are named for the Eastern Red Cedar, "", which once grew abundantly in the area. [ [http://www.flheritage.com/preservation/markers/markers.cfm?ID=levy Florida Hisotrical Markers Program - The Cedar Keys: Pencils, Lumber, Palm Fiber and Brushes] - accessed July 27, 2008]

There is evidence of native cultures dating back at least to the Deptford Period, about 500 B.C. The area was first mapped in 1542 by a Spanish cartographer and called "Las Islas Sabines", The Cedar Islands. [ [http://www.cedarkeyfloridarentals.com/id2.htm Cedar Key Florida Rentals: History] ] An archaeological dig at Shell Mound, nine miles north of Cedar Key, found artifacts dating back to 500 B.C. in the top ten feet of the twenty-eight foot tall mound. The only ancient burial found in Cedar Key was a 2,000 year old skeleton found in 1999. [McCarthy 2006 2-4]

The Cedar Keys were used by Seminole Indians, by the Spanish as a watering stop for ships returning to Spain from Mexico and by pirates, such as and .

Permanent historic occupation of the islands began in 1839, when the , led by General , established "Fort No. 4", which served as a depot and included a hospital, on Depot Key (later known as ) during the . This became the headquarters of the Army of the South. Cantonment Morgan was established on nearby late in the war and used as a troop deployment station and as a holding station for Seminoles who had been captured or who had surrendered until they could be sent to the West. A hurricane with a twenty-seven foot storm surge struck the Cedar Keys on October 4, 1842, destroying Cantonment Morgan and causing much damage on Depot Key. Some Seminole leaders had been meeting with Army officers at Depot Key to negotiate their surrender or a retreat to a reservation in the . After the hurricane, the Seminoles refused to return to the area. Colonel had declared the war to be over in August 1842, and Depot Key was abandoned by the Army after the hurricane. [McCarthy 2006 7-9
Mahon 315-7]

In 1842 the had enacted the , a precursor of the , to increase white settlement in Florida as a way of forcing the Seminoles to leave the territory. With the abandonment of the Army base on depot key, the Cedar Keys became available for settlement under the act. Under the terms of the act, several people received permits for settlement on Depot Key, Way Key and Scale Key. Augustus Steele, U.S. Customs House Officer for and postmaster for , received the permit for Depot Key, which he then renamed Atsena Otie Key. In 1843 he bought the buildings on the island, and built some cottages for wealthy guests. In 1844 he became the Collector of Customs for the port of Cedar Key as well as for . A post office named "Cedar Key" was established on Atsena Otie Key in 1845. The Florida legislature chartered the "City of Atseena Otie" in 1859. [McCarthy 2006 8-10, 15]

Cedar Key quickly became an important port, shipping lumber and harvested on the mainland. By 1860 two mills on Atsena Otie Key were producing 'cedar' slats for shipment to northern factories. As a result of the growth, the U.S. Congress appropriated money for a lighthouse on Seahorse Key in 1850. The was completed in 1854. The lighthouse lantern is 28 feet above the ground, but the lighthouse sits on a 47 foot high hill, putting the light 75 feet above sea level. The light was visible for 16 miles. Wood-frame residences were added to each side of the lighthouse several years later. [McCarthy 2006. 13, 16, 22
McCarthy 1990. 103-4] In 1860 Cedar Key became the western terminus of the , connecting it to Fernandina on the east coast of Florida. [Turner. 31] , U.S. Senator and President of the Florida Railroad, had acquired most of Way Key to house the railroad's terminal facilities. A town was platted on Way Key in 1859, and Parsons and Hale's General Store, which is now the , was built there in the same year. [McCarthy 2006. 17, 18, 22] On March 1, 1861, the first train arrived in Cedar Key, just weeks before the beginning of the Civil War.

With the advent of the in 1861, Confederate agents extinguished the light at Seahorse Key and removed its supply of sperm oil. The USS "Hatteras" raided Cedar Key in January 1862, burning several ships loaded with cotton and turpentine and destroying the railroad's rolling stock and buildings on Way Key. Most of the Confederate troops guarding Cedar Key had been sent to Fernandina in anticipation of a Federal attack there. Cedar Key was an important source of salt for the Confederacy during the early part of the war. In October 1862 a Union raid destroyed sixty kettles on Salt Key capable of producing 150 s of salt a day. The Union occupied the Cedar Keys in early 1864, staying for the remainder of the war. [McCarthy 2006. 24-5
Turner. 34]

In 1865 the Eberhard Faber mill was built on Atsena Otie Key. The Eagle Pencil Company mill was built on Way Key, and Way Key, with its railroad terminal, passed Atsena Otie Key in population. Repairs to the Florida Railroad were completed in 1868 and freight and passenger traffic again flowed into Cedar Key. The "Town of Cedar Keys" was incorporated in 1869, and had a population of 400 in 1870. [McCarthy 2006. 29-30]

Early in his career as a naturalist, walked convert|1000|mi|km|0 from to Cedar Key in just two months in 1867. Muir contracted while working in a sawmill in Cedar Key, and was nursed back to health in the house of the mill's superintendent. Muir recovered enough to sail from Cedar Key to in January 1868. He recorded his impressions of Cedar Key in his memoir, "A thousand-Mile Walk to the Gulf", which was published in 1916, after his death. [McCarthy 2006. 28]

After the war, considered extending the to Cedar Key, but he couldn’t reach an acceptable agreement with the town and decided to use Tampa as his Florida terminus. This sealed the fate of Cedar Key. When Plant's railroad to Tampa began service in 1886, the larger, deep-water port took shipping away from Cedar Key and the city began to decline. The once-thriving lumber industry had already begun to falter because most of the trees had been harvested. By 1890, timber and seafood resources in the Cedar Key area were depleted.

The fourth storm of the 1896 Atlantic hurricane season was the final blow. At approximately 4 a.m. on , , a 10-foot storm surge swept over the town, killing more than 100 people. Winds north of town were estimated at 125 mph, which would classify it as a category 3.

At the start of the twentieth century, fishing, sponge hooking and oystering had become the major industries, but around 1909, the oyster beds were exhausted. By 1913, ships ceased to use the port at Cedar Key, and the town never recovered, either as a port or as an industrial area. President established the Cedar Key National Wildlife Refuge in 1929 by naming three of the islands as a breeding ground for colonial birds. The lighthouse was abandoned in 1952, just as the tourism industry began to grow as a result of interest in the historic community. Today, the in Gainesville operates the lighthouse facility as a center for marine biology research. It is the oldest lighthouse still standing on Florida’s west coast. [ [http://www.bansemer.com/florida_lighthouses/cedar_key_lighthouse.htm Roger Bansemer Gallery website: Cedar Key Lighthouse-Seahorse Key, Florida] ]

The old-fashioned fishing village is now a center with several regionally famous seafood restaurants. The village holds two festivals a year, the Spring Sidewalk Art Festival and the Fall Seafood Festival, that each attract thousands of visitors to the area.

In 1950, Hurricane Easy, a category 3 storm with 125 mph winds, looped around Cedar Key 3 times before finally making landfall, dumping 38 inches of rain and destroying two thirds of the homes. Luckily, the storm came ashore at low tide, so the surge was only 5 feet.

followed a similar path in 1985, but did not make landfall. Packing 115 mph winds, the storm churned for two days in the Gulf, 50 miles to the west, battering the waterfront. All the businesses and restaurants on Dock Street were either damaged or destroyed and a section of the seawall collapsed.

After a statewide ban on large scale net fishing went into effect , a government retraining program helped many local fishermen begin farming clams in the muddy waters. Today Cedar Key's clam-based is a multi-million dollar industry. A local exhibit displays a reproduction of one of the first air conditioning installations. The system, with compressor and fans, was used in Cedar Key to ease the lot of patients. It is certainly hot and humid in the summer. 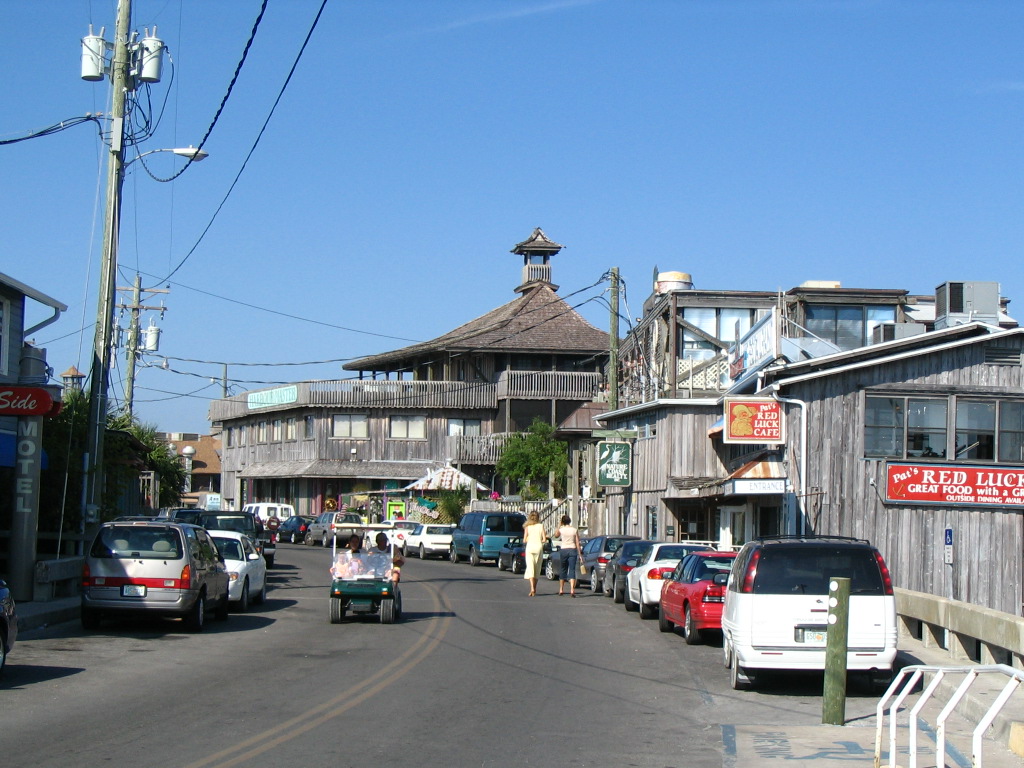 Cedar Key's importance in Florida's history, which began as far back as 1000 BC with habitation of the region, was recognized on , by the federal government. At that time, 80,000 acres (320 km²) in and around the town were added to the under the title of the Cedar Keys Historic and Archaeological District.

The contains exhibits that depict the town's colorful history as a thriving port city and railroad connection during the 19th century. Many of the sea shells and Indian artifacts on display were collected by Saint Clair Whitman, who began the first museum in Cedar Key. Whitman's house is located within the park and has been restored to reflect life on the island in the 1920s. Tours are available during museum hours. As the museum photo indicates, the building was constructed to withstand the hurricane conditions that the town is subjected to periodically. The museum property includes a short nature trail which gives visitors the opportunity to see local wildlife and native vegetation. [ [http://www.floridastateparks.org/cedarkeymuseum/default.cfm Florida Online Park Guide: Cedar Key Museum State Park] ]

There were 411 households out of which 14.4% had children under the age of 18 living with them, 48.7% were married couples living together, 8.3% had a female householder with no husband present, and 40.4% were non-families. 34.8% of all households were made up of individuals and 14.8% had someone living alone who was 65 years of age or older. The average household size was 1.92 and the average family size was 2.42.