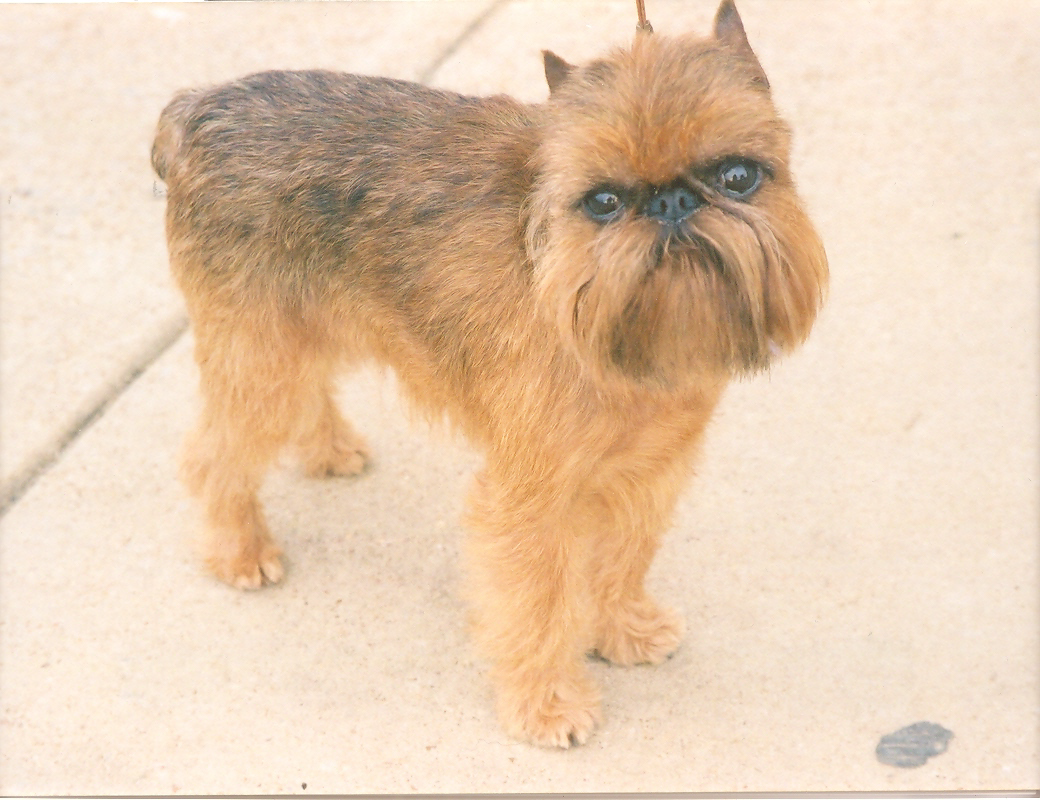 All three breeds are generally small, with a flat face, prominent chin, and large wide-set eyes that give the Griffon an almost human expression. They are sometimes compared to an from the movie and have been rumored to be a partial inspiration for that race to creator . All three breeds are sturdy toy dogs with thick-set, well-balanced bodies, giving a squared appearance in proportion when viewed from the side. A proper Griffon should be muscular, compact, and well-boned, and should not seem delicate, , or overly cobby. The Griffon often feels heavier than it is for such a small size. Because they are judged by weight rather than by shoulder height, proper proportioning is essential to determine whether a dog is too fat, too slim, or too tall for its size.

The neck is medium length and arched slightly. The chest is deep, and the back is level. The tail is either cropped to one-third its length or is left its natural length in breed standards than allow for that; it should be set high, and when showing, should express the alert, keen demeanor of the breed. Kinked tails are not uncommon in the breed, but are undesirable for ing unless they can be docked below the kink and still leave an acceptable length (one-third of the tail for the American Kennel Club; [http://www.akc.org/breeds/brussels_griffon/index.cfm AKC standard, Neck, Topline, Body ] ] tail docking is outlawed in many countries.)

The head is the most important characteristic of this breed, and the most well-defined aspect of the breed standard.

The rounded head should be large in proportion to the body, but should not appear to unbalance the dog. Depending on the standard, the forehead is referred to as "rounded" or "domed". In either case, the appearance or the skull should be of a circle (minus the features of the muzzle) rather than an oval, and the forehead should not bulge or protrude.

The ears should be high set but well apart, small, and carried semierect if left uncropped. Cropped ears are preferred in US show rings, but most European countries ban cropping.

The dark, wide-set, black-rimmed eyes are very large and expressive, giving the face its essential human-like qualities. They should be prominent but not bulging.

The nose is broad with wide nostrils, black, and set at the same level as the eyes. There should be a very pronounced , and the muzzle between the nose and forehead should not be more than 1.5 cm in length. Many standards prefer the stop to be so strong as to leave no visible distance between the nose and forehead. The nose should angle upwards. The muzzle from nose to chin should not be in line with the face, instead, it should slope towards the skull, giving a turned up or layback look. The broad chin should be undershot and prominent, sweeping up to the lips.

The lips should be black, and close fitting. The top lip is short under the nose, and should not overlap the bottom lip, nor should teeth or tongue be visible. The upper lips should not be pendulous in any way. The teeth should be strong and straight, with none missing or askew.

In the Griffon Bruxellois and the Griffon Belge, the coat is wiry, harsh, and dense.This has little to no shedding "

To accomplish this harsh coat the hair must be groomed with a technique known as stripping. This involves pulling out the dead hair by hand. If the coat is left to grow naturally it will become soft and woolly looking.

In the Petit Brabançon, the coat is short, straight, smooth, glossy, and flat, with no trace of wiry hair. Its coat should look rather like a or .

There are three distinct color types recognized for the breed. The actual color of each dog can vary depending on how they are groomed. If the hair is cut or clippers are used the color of dog will be considerably lighter than is expected by breed standards. The three color types are as follows:
*Griffon Bruxellois: Red or reddish-brown; black allowed on muzzle.
*Griffon Belge: Black, Black and tan (a black and tan pattern with emphasis on a rich red shade), Black and red (black mixed evenly with reddish-brown hairs). Black and red may have a black face mask.
*Petit Brabançon: All colours allowed for the other standards. Until recently, black short may have been a fault, but it is now allowed in all standards. A black mask is expected on the red or reddish brown coat. Grey hair from age is not penalized.

The Griffon Bruxellois is known to have a huge heart, and a strong desire to snuggle and be with his or her master. They display a visible air of self-importance. A Griffon should not be shy or aggressive; however, they are very emotionally sensitive, and because of this, should be socialized carefully at a young age. Griffons should also be alert, inquisitive and interested in their surroundings.

Griffons tend to bond with one human more than others. This, along with their small size, may make them unsuitable as a family pet, especially for a family with very small children. Griffons tend to get along well with other animals in the house, including cats, ferrets, and other dogs. However, they can get into trouble because they have no concept of their own relative size and may attempt to dominate dogs much larger than themselves.

Some say: "Having a Griffon means having a true constant companion. They need their favorite person all the time, and will be very unhappy if left outdoors or alone most of the day. A Griffon Bruxellois will want to follow you about the house, on your errands, and to bed."

Griffons have a handful of various health issues, including both physiological and genetic. It is thought that many of the issues have long existed in the breed, and only in recent years these issues have been identified and categorized. Despite many of these health concerns the typical life span of a Griffon is somewhere in the range of 12 to 15 years.

Breeding can be a difficult health issue for the Griffons. Because of the breed's size it is not uncommon for some complications to cause a to be needed. The size of a litter is typically 1-3 puppies. The size of the litter often determines the extent of these complications. It is not unheard of for a litter to have six in it. When they are born, the puppies only weigh but a few ounces and are small enough to fit in the palm of an adult's hand.

One issue that is typically fatal for the puppies is having a . It results in the puppy not receiving nourishment from the mother and eventually starvation. It is uncommon but, depending on the size of the it is possible for the puppy to survive where as it becomes older surgery can be done close the hole.

*Lacerations - Lacerations are a common issue amongst the breed. Because the Griffons have such large eyes and a short snout, there is very little there to protect their vision from foreign bodies. If a laceration is left untreated it can result in blindness.
*Cataracts - As with most breeds, are a common problem as the dog ages. For many breeders it is a disappointment that the cataracts typically develop long after the dog has already been bred.
*Lens Luxations - can be fairly common in the breed and result in secondary glaucoma
*Glaucoma - can also be a common issue amongst Griffons due to the breeds facial features and eye size.

Due to the shortened snout that Griffons have, is a major concern for the breed. To be left outside for any lengthy period of time is extremely devastating for a Griffon. The breed's smashed face may cause serious respiratory issues in extreme heat. Because of this danger Griffons are not favored for walking or living outside in warmer climates.

The three variations of this dog, the Brussels Griffon (Griffon bruxellois), the Belgian Griffon (Griffon belge), and the Petit Brabançon, all descend from an old type of dog called a "Smousje", a rough coated, small terrier-like dog kept in stables to eliminate rodents,

The and proved to be a disastrous time for the breed. War time is difficult on any dog breed, and the recovering numbers after the First World War were set back by increased vigilance in breeding away from faults such as webbed toes. By the end of the Second World War, Belgium had almost no native Griffon Bruxellois left, and it was only through the vigilance of dedicated breeders (in England particularly) that the breed survived at all.

*In the film "" (1997), as Verdell, played by six Brussels Griffons, named Timer, Sprout, Debbie, Billy, Parfait, and Jill the star