Connaught Place (Hindi: कनॉट प्लेस, (officially Rajiv Chowk) is one of the largest financial, commercial and business centers in Delhi. It is often abbreviated as CP and houses the headquarters of several Indian firms. Its surroundings occupy a place of pride amongst the heritage structures of the city. It was developed as a showpiece of Lutyens' Delhi featuring a Central Business District. Named after the Duke of Connaught, the construction work was started in 1929 and completed in 1933. It was renamed as the Rajiv Chowk after the late Indian Prime Minister Rajiv Gandhi.[1] The Connaught Place of today is one of the most vibrant business districts of Delhi. But with the development have also come certain problems, like dispute over property rights, encroachments, haphazard development, unauthorized construction, traffic congestion and others. 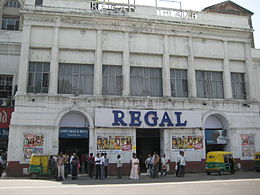 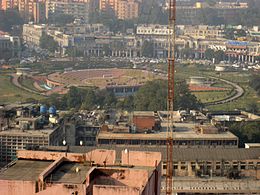 View of the Central Park and Inner Circle of CP

Prior to its construction the area was a ridge, covered with kikar trees inhabited by jackals and wild pigs, where residents of Kashmere Gate, Civil Lines area visited during the weekends for partridge hunting.[2] Only other visitors to the area were to the ancient Hanuman Temple, visited by people from the walled city on Tuesdays and Saturdays and that too before the sunset as the passage back wasn't considered safe during those days.[2] Residents of villages like Madhoganj, Jaisingh Pura and Raja ka Bazaar evacuated to build Connaught Place and nearby areas, were relocated in Karol Bagh to the West, then a rocky area populated by trees and wild, bushes.[3]

Plans to have a central business district were as the construction of the new capital of Imperial India started taking shape, mooted by W.H. Nicholls, the chief architect to the Government of India, who planned a central plaza based on the European Renaissance and Classical style. However Nicholls left India in 1917, and with Lutyens and Baker busy working on larger buildings of the capital, it was Robert Tor Russell, chief architect to the Public Works Department (PWD), Government of India who eventually designed the plaza.[2]

Named after, The Prince Arthur, 1st Duke of Connaught (1850–1942), third son of Queen Victoria and uncle of King George VI, Connaught Place's Georgian architecture is modeled after the Royal Crescent in Bath, England, who visited India in 1921 and laid the foundation of the Council House (now Sansad Bhavan, or Parliament House). It was designed by the architect John Wood the Younger and built between 1767 and 1774. Though while Crescent is semi-circular and three storied largely residential structure, Connaught Place had only two floors, almost makes a complete circle and was planned to have commercial establishments on the ground with residential area on the first floor.[2] The circle was eventually planned with two concentric circles, creating Inner Circle, Middle Circle and the Outer Circle and seven radial roads, around a circular central park. As per the original plan, the different blocks of Connaught Place were to be joined from above, employing archways, with radial roads below them, but the circle was 'broken up' to give it a grander scale. Even the blocks were originally planned to 172 meters high, but later reduced to present two-storied structure with an open colonnade. Governments plans to have the New Delhi Railway Station to be built inside the Central Park was rejected by the Railways as it found the idea impractical, instead it chose the nearby Paharganj area. Finally the construction work began in 1929, as principal construction of the Viceroy House (present President's House), Central Secretariat, Parliament House, and All-India War Memorial, India Gate was winding down and was complete by 1933, much after the inauguration of the city in 1931.[2][4] 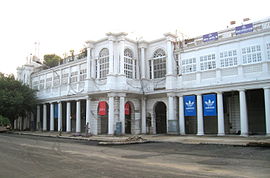 Early commercial establishments were of traders from Kashmere Gate area Kaventer's, Galgotia and Snowhite. Most of Indian princely states now had their local homes in the nearby areas around King's way (present Rajpath), and would frequent shops for designer clothes, artefacts, shoes, and pianos. Regal cinema, the first cinema of CP too opened in time, it went on to host popular concerts, theatre groups and ballet performances. Odeon and Rivoli, followed Regal, and Indian Talkie House opened in 1938.[2][4][5] Initially only Indian snacks were available at CP, gradually restaurants started opening in the plaza, with names like Kwality, United Coffee House and others offering Continental and Mughlai cuisines.[6] Wenger's, the confectioners, was one of the first shops in CP, it also owned the largest restaurant in New Delhi on the first floor of their present A-Block outlet. Originally established in 1926 as Spencers in Kashmere Gate, Wenger's was owned by a Swiss couple, introducing Delhi to pastries and homemade Swiss chocolates, though in its early years it too was patronized mostly by Britisher officers, Indian royalty and some foreign-returned businessmen, for Delhi was still a city of classical tastes of the walled city. Davico's across the Connaught Plaza, and Standard restaurant were popular names for decades before fading away, another old timer, Embassy Restaurant, started in 1948.[5] The Imperial, New Delhi’s first luxury hotel opened in 1931 on Queen's Way, (present Janpath), which in coming years not just became a haunt for the royalty but place for political talks, most famously, it was here that Pandit Nehru, Mahatama Gandhi, Jinnah and Lord Mountbatten met to discuss the Partition of India and the birth of Pakistan.[7][8]

Residents moved in gradually into first floor quarters which were almost full by 1938, but it was another decade before the plaza became a busy market place that it became later, as World War II broke and Independence movement acquired feverish pitch and markets experience dwindling sales, but post-independence things started looking up by the 1950s.[2][4][5]

Until the 1980s, a Phatphat Sewa, a Harley Davidson rickshaw service, took visitors from CP to Red Fort and Chandani Chowk, before it was stopped due to pollution concerns.[9] The empty block of the Inner circle was filled up in late 1970s with the construction underground market, a first in Delhi, Palika Bazaar at the junction point, stretching up to the Outer circle, it also came with an adjoining underground parking. However a major alteration in the skyline was the addition of red sandstone (inspired by the historic Red Fort) and glass skyscraper, the Jeevan Bharti building (LIC building), designed by architect Charles Correa in 1986, it towered over the low-lying and predominantly white Connaught Place and was criticized for being too futurist, but gradually as other skyscrapers mushroomed on the periphery the debate faded away.[10]

As the talkies made way into Indian cinema in 1931, and became a craze in the 1930s and the 40s, four theatres came up within Connaught Place, Plaza, Regal, Rivoli, Odeon and a short-lived "Indian Talkie House" that opened in 1938, all making CP the entertainment hub of New Delhi. Regal, was the first theatre of CP, opened in 1932 by Sir Sobha Singh, designed by architect Walter Sykes George, mainly for stage performances. In the coming years it hosted Western Classical music artists, Russian ballet and British theatre groups, though soon mornings and afternoons movie shows were started. The next theatre to come up in CP, was Plaza in 1940, designed by Sir Rober Tor Russell, the architect of Connaught Place himself. It was owned by director and actor Sohrab Modi until in the early 1950s. Odeon was built in 1945, city’s second 70mm screen, after "Shiela Cinema" in Paharganj. Rivoli, close to Regal was the smallest theatre of the area. Half a century later most of the theatres was still running, though ownership changed hands, for most. Plaza and Rivoli are owned by multiplex giant PVR Cinemas, while Odeon is a joint venture with Reliance Big Pictures. [11][2] 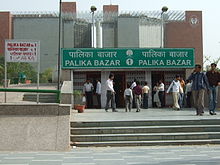 The area is instantly recognizable on any map of Delhi, being the big circle in the middle with radial roads spreading out in all directions, like spokes on a wheel. Eight separate roads lead out from Connaught's inner circle, named Parliament Street and Radial Roads 1 through 7. Twelve different roads lead out from Connaught Circus, the outer ring; the most well-known of these is Janpath, the continuation of Radial Road 1. It is a logically planned area and houses one of India's first under ground market-Palika Bazaar (Municipal Market), named after nagarpalika. While outer Circle known as Connaught Circus (officially Indira Chowk), has rows of restaurants, shops and hotels, the Middle Circle has offices and small eating outlets.[12]

The central park of Connaught Place, has long been a venue for cultural events, in 2005-006 it was rebuilt after the construction of Delhi Metro station below it. That station, Rajiv Chowk, is the interchange for the Yellow and Blue lines of the Metro and one of the largest and busiest stations in the network.

The Connaught Place is famous for its varied restaurants, bars and bookshops.

Connaught Place was the site of two of the five terrorist blasts that made up the 13 September 2008 Delhi bombings.[13] Ten people were injured, police and witnesses said that the bombs went off in dustbins in and around Connaught Place. There was also one bomb blast in the Central Park near Connaught Place. Authorities also discovered two undetonated bombs in Delhi, one located at the Regal cinema complex in Connaught Place.[14] As a response, all dustbins have been removed from the area for security reasons.

By the late 2000s, Connaught Place may have lost its old glory but the charm of the market still works on the people. As a part of its 'Return to heritage Project', the New Delhi Municipal Council (NDMC) has prepared a plan to revamp and redevelop this proud landmark of Delhi. The plan includes provision of heritage sensitive signages, engineering improvements of roads, drainage sewerage, water supply and substations etc., development of a traffic management plan, provisions of street furniture including adequate parking, walkways etc. and enhancing the structural stability of all buildings including retrofitting for earthquake resistance. All these components have been identified based on studies conducted by various reputed agencies like SPA, RITES, CMCCC, NTPAC etc. Due to the renovation work which is currently underway as a part of this project, many stores on the outer circle have lost their air-conditioning.