The Hyundai Sonata (Korean: 현대 쏘나타) is a mid-size car/full-size car manufactured and marketed globally by Hyundai Motor Company. From the sixth generation onwards, it is known as the i45 in the Australian, Singaporean and New Zealand markets. The car will be known in Western Europe as the i40 (but is a 5-door hatchback as the i40).

The first Sonata was only sold in a few markets like the Korean domestic one and in Canada as the Stellar II. The vehicle was unveiled in South Korea in November 1985. It was not available in the US because it did not meet the United States emissions standards.

The Y2 Sonata was part of Hyundai's expansion in North America after the success of the Excel. It was introduced in South Korea on June 1, 1988.[3] It was then introduced in Canada in September 1987 as a 1988 model, and in 1988, as a 1989 model in the United States. The exterior was designed by Giorgetto Giugiaro of ItalDesign. The vehicle received a mid-term facelift in 1991. It replaced the Stellar as Hyundai's large family car. Sonatas were built in Ulsan, Korea, and in Bromont, Quebec.

The Sonata was designed by Hyundai and featured Mitsubishi's engineering, including the platform from the Galant Σ and its 2.4 L 110 hp (82 kW) Sirius I4 engine as used in American-market models. A 3.0 L V6 based on the Mitsubishi 6G72 arrived in 1990. Other markets received 1.8L and 2.0L engines carried over from the first generation, but equipped with MPI,[4] replacing their carbureted counterparts used in the Y1 Sonata. The U.S. model received the 2.0 L engine for the 1992, replacing the original 2.4 L engine.[2]

Trim levels in the US were:

There was also an additional CDX model with a 2.0lt engine, which has most of the standard model's features, minus the CD Multichanger, climate control, cruise control, Sat Nav, traction control.[6]

A facelift for the Sonata (Y3 facelift) in 1996 saw modifications to the front and rear. The four-cylinder engine was also increased to 92 kW (125 PS; 123 hp) for that year as well.

The Kia Optima (called the Magentis outside of the United States) was based on the same automobile platform of this generation of Sonata and shared the same doors and some other panels.

This Sonata also shared a platform with the first-generation Hyundai Santa Fe, a compact crossover SUV.

This generation of Sonata is still being built (since 2002) and sold in China as of September 2006, by Beijing Hyundai Co. and in Russia by TagAZ. Because of licencing problems, TagAZ has not produced the Sonata since 06/2010. In 08/2010 production will be possibly continued under new name "TagAutoprom".[citation needed]

The NF Sonata was launched in August 2004 in Korea, based on a new platform created from the project NF. The company's first all-aluminum I4 engine, dubbed Theta, debuted in the new Sonata. Engine choices at launch were a 2.4L I4 rated 164 bhp (122 kW) at 5800 rpm and a 3.3L V6 rated 237 bhp (177 kW) V6. The diesel version was used as a taxicab in Singapore. Diesel versions are available in Europe and New Zealand.

The U.S. May 2005 launch of the new Sonata coincided with the production commencement at the company's first U.S. assembly plant, in Montgomery, Alabama.

Classified by the U.S. Environmental Protection Agency‎ as a large car, the fourth generation was 2 in (51 mm) longer and taller and 1 in (25 mm) wider than the previous generation. Standard features in U.S. models included anti-lock braking system/electronic stability control/traction control system as well as six airbags (driver/front passenger front and side, and side curtain).[10]

The redesigned vehicle was unveiled at the 2008 Chicago Auto Show as a 2009 model year vehicle.[12] The production version was sold as the Hyundai Sonata Transform in Korea, and the model debuted elsewhere as an 'early' 2009 model. 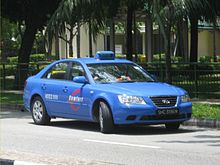 Redesigned gauges feature a blue backlight, and a touch-screen navigation system, optional on the Limited trim level only, includes satellite radio capability.[16] Bluetooth capability is available as an optional unit, separate from the audio or navigation system, and all models include both a USB port along with an auxiliary input jack. An optional USB adaptor cord allows integration of an iPod, and chrome interior door handles are standard on the Limited trim.

There are minimal changes for the 2010 model, which includes the optional navigation system on the SE as opposed to being a Limited-exclusive option, and the V6 engine is no longer offered on the GLS model.

Beijing Hyundai launched a redesigned Sonata called the Ling Xiang for the Chinese market with an updated exterior and revised rear seating.[19]

Hyundai commenced development of the YF Sonata in 2005, with a development cost of ₩450 billion (US$ 372 million). In the Australian,[22] New Zealand, and Singaporean markets, the YF is retailed under the name "Hyundai i45", fitting in the with the alphanumeric i-series nomenclature utilized by some Hyundai vehicles in these markets. In Western Europe the car is badged as a Hyundai i40. In the UK the i40 Tourer will cost £19,000. In Eastern Europe (especially Ukraine) the car will badged as a Sonata (as in North America and South Korea). 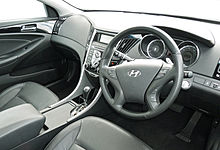 For the US market, Hyundai uses their new direct injection 2.4 liter four cylinder engine. With direct injection technology this new engine improves fuel economy over previous models and produces a maximum of 200 PS (147 kW; 197 hp) at 6300 rpm and 25.5 kg·m (250 N·m; 184 lb·ft) at 4250 rpm.[24] It is part of the Theta II engine lineup. Furthermore, all engines are offered with a new six-speed automatic transmission.[25] The 6th Sonata is built on hot-stamped ultra high-strength steel.

The US version of the new Sonata was unveiled at the 2009 LA Auto Show. As with the previous model, a GLS, SE, and Limited trims are offered. A six-speed manual transmission is standard on the GLS, and a six-speed automatic is available. Differences with the Korean model include differences with the GLS model, which features a body-colored grille and door handles, and different steel wheel covers. Limited models and optional stereos on the GLS and SE now have "Dimension" audio systems, and the Limited trim has an optional Infinity stereo. Limited models have standard front and rear heated seats; the first use of them in this segment.[26] Additional differences include a redesigned straight leather shifter as opposed to the gated one on Korean models, different cupholders, and the addition of an extra exterior color choice, Indigo Blue Pearl. The 6th Hyundai Sonata was awarded 'Top Safety Pick' from Insurance Institute for Highway Safety (IIHS) in the US.[27] The Sonata 2.0T was released in December of 2010.

Highly paid advertisements in the Super Bowl XLIV were used to market the new Sonata in the U.S. One commercial proclaimed that the Sonata's paint quality is better than that of the Mercedes-Benz CLS-Class. The steeply raked front and rear glass give the Sonata a slightly coupe-like silhouette, much like that of the Mercedes-Benz CLS and the Volkswagen CC.[28][29] Sonata was also advertised in an episode of the TV series House called "Two Stories", showing the details of the 6th generation Sonata and one of the cast claiming that he can put three sets of golf clubs into the trunk.

Sales in the United States began in early 2010.

In Western Europe, the car will be released in Autumn 2011.

At the 2008 Los Angeles Auto Show, Hyundai unveiled the Hyundai Blue Drive powertrain for the then next generation Sonata, which uses lithium polymer battery technology.[37] It was reported to be based on Hyundai BLUE-DRIVE concept.[38]

The 2011 Sonata Hybrid was one of the five finalists for the 2011 Green Car of the Year awarded by the Green Car Journal in November 2010, competing with two plug-in electric vehicles, the Nissan Leaf and the Chevrolet Volt, the 2011 winner.[43] 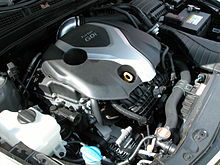 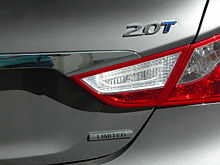 To replace the V6 power option for the Hyundai Sonata in certain markets, Hyundai has developed a turbo powered 2.0 litre engine that has direct injection and is intercooled. The Theta-II engine produces 274 horsepower (204 kW) and 269 lb·ft (365 N·m) of torque while achieving an efficiency rating of 34 mpg-US (6.9 L/100 km; 41 mpg-imp) highway, beating the specs provided by the 3.3 litre Lambda V6 offered in the previous model. The new model is badged as the 2.0T and is available on the SE or Limited trim lines.[47][48] All turbo models get standard dual zone climate control, steering wheel paddle shifters, chrome-tipped dual exhaust, and 18" wheels that are shared with the non-turbo SE models. Limited 2.0T models receive all of these options as well as a heated leather interior, sunroof and other features.[26]

Additionally, during years 1992-1994, the Sonata came with the Hyundai ValueCare Ownership Program that covered all regular scheduled maintenance at no charge for the first 2 years or 24,000 miles.

The Sonata has received the following awards: