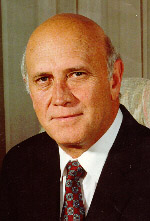 Frederik Willem de Klerk (born 18 March 1936) was the last State President of apartheid-era , serving from September 1989 to May 1994. De Klerk was also leader of the National Party (which later became the New National Party) from February 1989 to September 1997.De Klerk is best known for engineering the end of apartheid, South Africa's racial segregation policy, and supporting the transformation of South Africa into a multi-racial democracy by entering into the negotiations that resulted in all citizens, including the country's black majority, having equal voting and other rights. He shared the in 1992 and the in 1993 along with for his role in the ending of apartheid.

He was one of the Deputy Presidents of during the presidency of Nelson Mandela until 1996, the last white person to hold the position. In 1997, he retired from .

Born in to parents Jan de Klerk and Corrie Coetzer, De Klerk came from a family environment in which the conservatism of traditional white South African politics was deeply ingrained. His great-grandfather was a Senator, his grandfather stood twice for the white parliament unsuccessfully, and his aunt was married to NP Prime Minister J. G. Strijdom. In 1948, the year when the NP swept to power in whites-only elections on an apartheid platform, F. W. de Klerk's father, Johannes "Jan" de Klerk, became secretary of the NP in the Transvaal province and later rose to the positions of cabinet minister and President of the Senate. [Johnson, Anthony. "Frederik Willem de Klerk: a conservative revolutionary." UNESCO Courier (Nov 1995): 22(2). Expanded Academic ASAP. Thomson Gale. Brandeis University. 12 Mar. 2007. Thomson Gale Document Number:A17963676] His brother Willem is a liberal newspaperman and one of the founders of the Democratic Party. De Klerk matriculated from Monument High School in . De Klerk graduated in 1958 from the with BA and LL.B degrees (the latter ""). Following graduation, De Klerk practiced law in in the . In 1959 he married , with whom he had two sons and a daughter.

"F.W.", as he became popularly known, was first elected to the in 1969 as the member for , and entered the cabinet in 1978. De Klerk had been offered a professorship of administrative law at Potchefstroom in 1972 but he declined the post because he was serving in Parliament. In 1978, he was appointed Minister of Posts and Telecommunications and Social Welfare and Pensions by Prime Minister Vorster. Under Prime Minister P.W. Botha, he held a succession of ministerial posts, including Posts and Telecommunications and Sports and Recreation (1978-1979), Mines, Energy and Environmental Planning (1979-80), Mineral and Energy Affairs (1980-82), Internal Affairs (1982-85), and National Education and Planning (1984-89). He became provincial National Party leader in 1982. In 1985, he became chairman of the Minister's Council in the House of Assembly.

As Minister of National Education, De Klerk was a supporter of segregated universities, and as a leader of the National Party in Transvaal, he was not known to advocate reform. However, after a long political career and with a very conservative reputation, in 1989 he placed himself at the head of "verligte" ("enlightened") forces within the governing party, with the result that he was elected head of the National Party in February 1989, and finally State President in September 1989 to replace then president P.W. Botha when the latter was forced to step down after a .

In his first speech after assuming the party leadership he called for a non-racist South Africa and for negotiations about the country's future. He lifted the ban on the ANC and released Nelson Mandela. He brought apartheid to an end and opened the way for the drafting of a new constitution for the country based on the principle of one person, one vote. Nevertheless, he was accused by of complicity in the violence between the ANC, the and elements of the security forces. In "" Sampson accuses De Klerk of permitting his ministers to build their own criminal empires.

His presidency was dominated by the negotiation process, mainly between his NP government and Mandela's ANC, which led to the democratisation of South Africa.

In 1990, De Klerk gave orders to roll back South Africa's nuclear weapons programme; the process of nuclear disarmament was essentially completed in 1991. The existence of the programme was not officially acknowledged before 1993. [ [http://www.nti.org/e_research/profiles/SAfrica/Nuclear/2149_3277.html NTI: Country Overviews: South Africa: Nuclear Chronology ] ]

After the first free elections in 1994, De Klerk became vice-president in the government of national unity under , a post he kept until 1996. In 1997 he also gave over the leadership of the National Party and retreated from politics.

In a 2007 radio interview, jailed policeman claimed that De Klerk had hands "soaked in blood" and had ordered political killings and other crimes during the conflict. This was in response to Mr. De Klerk's recent statements that he had a "clear conscience" regarding his time in office. [cite news|url=http://news.bbc.co.uk/2/hi/africa/6919569.stm|date=2007-07-27|publisher=BBC|title=Jailed policeman accuses De Klerk]

In 1998, De Klerk and his wife of 38 years, , were divorced following the discovery of his affair with , [cite news|url=http://english.people.com.cn/200112/06/eng20011206_86069.shtml|title=Ex-wife of De Klerk Murdered: S. African Police|publisher=People's Daily Online|date=|accessdate=2006-04-18] then the wife of , a Greek shipping tycoon who had allegedly given De Klerk and the NP financial support. [cite news|first=Terry|last=Crawford-Browne|url=http://www.peacenews.info/issues/2442/244220.html|title=A question of priorities|work=Peace News Issue 2442|accessdate=2006-04-18] Soon after his divorce, De Klerk and Georgiades were married and, during their honeymoon, he addressed the in . His divorce and re-marriage scandalised conservative South African opinion, especially among the Calvinist Afrikaners. In 1999 his autobiography, "The Last Trek-A New Beginning," was published.

On 4 December 2001, was found stabbed and violently strangled to death in her luxuous flat. De Klerk, who was currently on a brief visit to , to celebrate the 100 year anniversary of the foundation, announced he would immediately return to mourn his dead ex-wife. The atrocity was reportedly condemned strongly by South African president and , among others, who openly spoke in favour of Marike de Klerk. On 6 December, 21 year old security guard was arrested for the murder. On 15 May 2003 he received two life sentences for murder as well as three years for breaking into Marike de Klerk's apartment.

In 2004 De Klerk announced that he was quitting the New National Party and seeking a new political home after it was announced that the NNP would merge with the ruling ANC. That same year, while giving an interview to US journalist Richard Stengel, De Klerk was asked whether South Africa had turned out the way he envisioned it back in 1990. To which his response was: "There are a number of imperfections in the new South Africa where I would have hoped that things would be better, but on balance I think we have basically achieved what we set out to achieve. And if I were to draw balance sheets on where South Africa stands now, I would say that the positive outweighs the negative by far. There is a tendency by commentators across the world to focus on the few negatives which are quite negative, like how are we handling AIDS, like our role vis-à-vis Zimbabwe. But the positives — the stability in South Africa, the adherence to well-balanced economic policies, fighting inflation, doing all the right things in order to lay the basis and the foundation for sustained economic growth — are in place." [cite news|url=http://www.cfr.org/publication/7114/hbo_history_makers_series.html?breadcrumb=%2Fregion%2F151%2Fsouthern_africa|title=HBO History Makers Series: Frederik Willem de Klerk]

In 2000 De Klerk established the pro-peace of which he is the chairman. De Klerk is also chairman of the , an organisation he established after retiring from office. Formally inaugurated in March 2004, the Global Leadership Foundation works to "promote good governance - democratic institutions, open markets, human rights and the rule of law - and to contribute to the prevention and resolution of conflict through mediation." [ [http://www.g-l-f.org/ Welcome to GLF Global Leadership Foundation ] ]

In January 2007 De Klerk was a speaker promoting peace and democracy in the world at the "Towards a Global Forum on New Democracies" event in Taipei, Taiwan, along with other dignitaries including Poland's Lech Walesa and Taiwan President Chen Shui-Bian. [ [http://www.mofa.gov.tw/webapp/content.asp?cuItem=25192&mp=6 "Ministry of Foreign Affairs, Republic of China" Press Release: H.E Young Sam, Kim, Former President of the Republic of Korea and his delegation arrived in Taiwan] ]

FW de Klerk is an Honorary Patron of the and Honorary Chairman of the .. He has also received the Gold Medal for Outstanding Contribution to Public Discourse from the for his contribution to ending apartheid.

The name 'De Klerk' (literally meaning "the clerk" in Dutch) is derived from Le Clerc, Le Clercq, and De Clercq and is of French origin, [cite book|last=Lugan|first=Bernard|year=1996|title=Ces Francais Qui Ont Fait L'Afrique Du Sud ("The French People Who Made South Africa")|publisher=Bartillat|id=ISBN 2-84100-086-9] as are a great number of other surnames, reflecting the large number of French Huguenot refugees who settled in the Cape beginning in the seventeenth century as refugees escaping religious persecution.