Cyclone Catarina is one of several informal names for a South Atlantic tropical cyclone that hit southeastern Brazil in late March 2004. The storm developed out of a stationary cold-core upper-level trough on March 12. Almost a week later, on March 19, a disturbance developed along the trough and traveled towards the east-southeast until March 22 when a ridge caused the forward motion of the disturbance to cease. The disturbance was in an unusually favorable environment with below average wind shear and above average sea surface temperatures. The combination of the two led to a slow transition from an extratropical cyclone to a subtropical cyclone by March 24. The storm continued to obtain tropical characteristics and became a tropical storm the next day while the winds steadily increased. The storm reached winds of 75 mph (120 km/h)—equivalent to a low-end category one hurricane on the Saffir-Simpson Hurricane Scale—on March 26. At this time it was unofficially named Catarina and was also the first hurricane-intensity tropical cyclone ever recorded in the Southern Atlantic Ocean. Unusually favorable conditions persisted and Catarina continued to intensify and was estimated to have peaked with winds of 100 mph (155 km/h) on March 28. The storm made landfall later during the day at that intensity near the town of Torres. Catarina rapidly weakened upon landfall and dissipated the next day.

Since Catarina had made landfall in an area which has never, according to reliable records, experienced a tropical cyclone before, the damage was quite severe. Despite being an unprecedented event, Brazilian officials took the appropriate actions and warned the public about the approaching storm. Residents heeded the warnings and prepared for the storm by either evacuating or by riding it out in their homes. Catarina ended up destroying 1,500 homes and damaging around 40,000 others. Severe damage was also dealt to the agricultural products, as 85% of the banana crops and 40% of the rice crops were lost in the storm. Despite the lack of adequate warning for the storm, only three people were confirmed to have perished in the storm and 75 others were injured. Damages from the storm amounted to $350 million (2004 USD $407 million 2011 USD).

On March 12, a cold-core stationary upper-level trough became established offshore southern Brazil. A disturbance formed along it on the 19th, and moved east-southeastward until the 22nd, when a ridge to its southeast kept it stationary. With exceptionally unusual favorable upper level winds and slightly below average,[2] if marginally warm, water temperatures from 24 to 26 °C (75 to 79 °F), it gradually developed, resembling a subtropical storm by the 24th. Located 630 statute miles (1010 km) east-southeast of Florianópolis, it headed slowly westward, and appeared to become a tropical storm on March 25.[3]

A compact storm, it continued westward while steadily intensifying. The structure of the storm continued to improve and due to a definite eye feature showing on satellites, the storm was determined to have become a hurricane-equivalent cyclone on March 26.[4] A Brazilian newspaper indicated a "Furacão (hurricane) threatening Santa Catarina (the Brazilian state)." Partly because of this headline, the storm was unofficially named Catarina. It continued to encounter favorable conditions and reached a peak of 100 mph (160 km/h) estimated sustained winds on the 28th, which made the storm the equivalent of a Category 2 hurricane on the Saffir-Simpson Hurricane Scale. Gusts peaked at around 110 mph (180 km/h). The cyclone made landfall at that intensity, hitting just north of the town of Torres (in the northeast of the extreme southern Brazilian state of Rio Grande do Sul). Catarina rapidly dissipated over land in the normal manner of a tropical cyclone.[3]

North American forecasters, however, surprised as they were, considered this a hurricane immediately upon the satellite-derived evidence. Since it had clear eyewall structure bounded by deep convective central dense overcast, well-defined spiral outer bands and outflow structure, warm water temperatures of 79 °F (26 °C), little shear, a warm core low, and overall tropical characteristics, it was considered a hurricane by the National Hurricane Center in the United States.[6]

Though it is most commonly known as Catarina, all names for this storm are "unofficial," in that no World Meteorological Organization-affiliated meteorological agency that monitors hurricanes named it. (Tropical cyclone names are predetermined by an international committee of the World Meteorological Organization.)[7] It has also been unofficially called "Aldonça",[8] and the advisory names for it were "01T-ALPHA" from the United Kingdom's Met Office, and "50L-NONAME" from the United States' National Hurricane Center, which keeps it well outside normal designation, which start at 1L for named storms and use 90L to 99L for possible storms.[3]

There is also no official naming convention for the meteorological term of tropical cyclones with winds of at least 74 mph (119 km/h) (i.e., hurricane, typhoon, cyclone) in the South Atlantic basin; however, because it was in the Southern Hemisphere, it is typically considered Cyclone Catarina, "cyclone" being the predominant term for Southern Hemisphere tropical cyclones.[3]

Typically, tropical cyclones do not form in the South Atlantic Ocean, due to strong upper level shear, cool water temperatures, and the lack of a convergence zone of convection. Occasionally though, as seen in 1991 and early 2004, conditions can become slightly more favorable. For Catarina, it was a combination of climatic and atmospheric anomalies. Water temperatures on Catarina's path ranged from 24 to 25 °C, slightly less than the 26.5 °C temperature of a normal tropical cyclone, but sufficient for a storm of baroclinic origin.[4]

Up to that point, no tropical cyclone had been observed to reach hurricane strength in the South Atlantic Ocean via satellite imagery, which dates back to the mid-1970s.[9] While Catarina formed in an unusual area, its relation to global warming or any other type of global climatic change is still up for debate. The Brazilian Society of Meteorology attributed it to "climatic changes and atmospheric anomalies,"[5] while other researchers have indicated that it could be the result of the Southern Annular Mode or other seasonal variations in weather within the Southern Hemisphere, again linked to global changes in climate.[10] However, more research in the area is still needed to make a conclusion.[10] 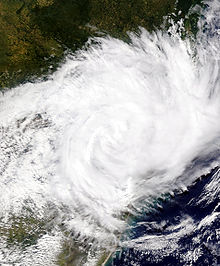 Like normal tropical cyclones, Catarina brought heavy flooding with it. Despite the uncertainty in the future of the storm, Brazilian officials took the appropriate actions to ensure the safety of the residents who lived along the coastline. A successful evacuation was executed for numerous residents along the coast, though some people decided to ride out the storm in their own homes.[4] The storm damaged around 40,000 homes and destroyed 1500; 85% of the banana crop and 40% of the rice crop were also lost. Total damages were estimated at $350 million (2004 USD, ($407 million 2011 USD). It also killed at least three and injured at least 75. At least 2,000 people were left homeless following the storm.[11]

At Passo de Torres, many shipyards were destroyed, as they were not designed to withstand the pressure differentials caused by Catarina's winds; widespread roof damage was reported at this municipality as well.[12] Near the Mampituba River, a house was blown about 50 meters (165 ft) upstream, literally landing in another state: it originally was built in the Torres municipality of Rio Grande do Sul, yet it ended up in Passo de Torres, within Santa Catarina. In rural areas, the corn, banana, and rice fields received the most damage, although rice farmers were able to partially recoup their losses, as they had harvested before Catarina made landfall.[12]

Overall, almost 36,000 residences were damaged as a result of Catarina's onslaught; of those, 993 collapsed completely. The commercial sector fared slightly better, as only 2,274 buildings were damaged and 472 collapsed. Finally, 397 public buildings were damaged and three were destroyed. These account for 26% of the total buildings in the region, and property damage of $25.6 million (2004 USD $298 million 2011 USD). Four-fifths of the damaged houses had some sort of roof failure or collapse. Most of the damage was blamed on the low quality of the construction; brick residences typically lacked plaster, beams, or columns, for example. The areas affected the most were those inhabited by low-income families, usually with annual family salaries of less than $400 USD.[12]