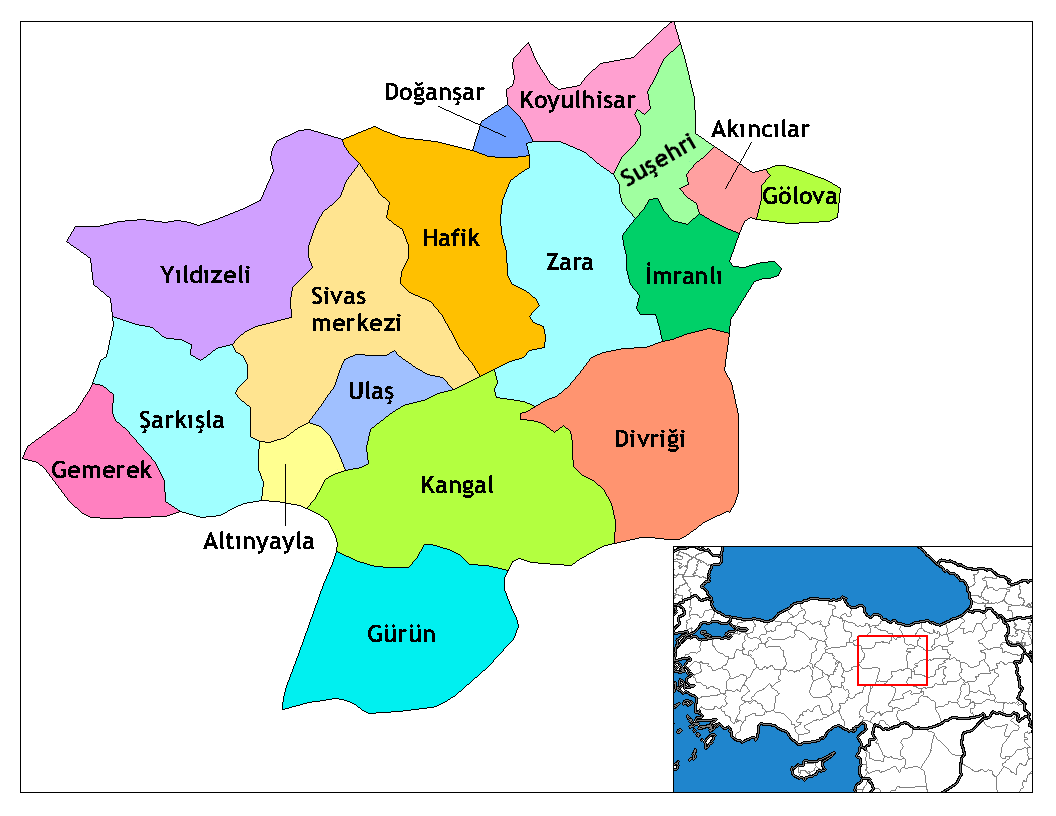 Sivas (the late-Classical and Medieval "Sebastia", sometimes spelt "Sebastea" or "Sebasteia", Greek: "Σεβάστεια", Armenian: " _hy. Սեբաստիա") is the provincial capital of in . According to the 2007 Turkish census, its population was 296,402.

The city lies at an elevation of 4,193 feet (1,285 m) in the broad valley of the Kızılırmak river, and is a moderately-sized trade center and industrial city, although the economy has traditionally been based on agriculture. Rail repair shops as well as a thriving industry of manufacturing rugs, bricks, cement, and cotton and woolen textiles are all important for the economy of the city. The surrounding region is a cereal-producing area and with large deposits of iron ore, which are worked at .

Sivas is also communications center to the north-south and west-east trade routes to Iraq and Iran, respectively. With the development of railways, the city gained new economic importance, as it stands at the junction of several railways and highways and is linked by air with via , as well as an important rail line linking the cities of , , and .

Excavations at a mound known as indicate Hittite settlement in the area, though little is known of Sivas' history prior to its emergence in the Roman period. In 64 B.C. as part of his reorganization of Asia Minor after the , Pompey the Great founded a city on the site called "Megalopolis". [A.H.M. Jones, "The Cities of the Eastern Roman Provinces", 2nd ed. (Oxford University Press, 1971), 159.] Numismatic evidence suggests that Megalopolis changed its name in the last years of the 1st century B.C. to "Sebasteia" in honor of the emperor : "Σεβάστεια" is the feminine form of the usual Greek translation of Augustus. The name "Sivas" is the Turkish version deriving from the name Sebasteia.

Sebastea, which became the capital of the province of Armenia Minor under the emperor , was a town of some importance in the early history of the Christian Church; it was the home of and St. Peter of Sebaste, who were bishops of the town, and of , one of the early founders of in — all in the 4th century; the place of martyrdom of the , also 4th century; the birthplace (1676) of , the founder of the Mekhitarist Order. Several Greek Orthodox and Armenian patriarchs were born in Sebaste, among them Atticus, the 5th‑century Patriarch of Constantinople, and Michael, the 16th‑century Patriarch of Echmiadzin.

The city was briefly the headquarters of the Armenian church. The Armenian king of , , ceded his lands to the Byzantine emperor in 1021 A.D. and migrated to Sivas with many of his nobles and people and became a vassal of the Byzantines, until the city was conquered by the dynasty (1155–1192) after the in 1071.

In 1174, the city was captured by Seljuk ruler and periodically served as capital of the Seljuk empire along with . Under Seljuk rule, Sivas was an important center of trade and site of a citadel, along with mosques and madrasahs (religious educational institutions), four of which survive today and one of which houses the Sivas Museum.

The was held in this city on , . With the arrival of (1881–1938), the founder of the Turkish Republic, from , the is considered a turning point in the formation of the Turkish Republic. It was at this congress that Kemal's position as chair of the executive committee of the national resistance was confirmed. (see )

On , , the took place: thirty-seven intellectuals and local participating in the Cultural and Literary Festival were killed when the Madımak Hotel in the centre of Sivas was burnt down by 15.000 members of various anti-democratic, pro-shariah radical islamist groups protesting against the presence of , the Turkish translator of 's . Individuals who lost their lives that day included prominent artists and intellectuals such as , , , and , as well as a Dutch anthropologist. Nesin managed to escape the burning building by the help of a fireman, and was carried away to safety from the fanatical mob. Protested by many Turkish and Kurdish singers e.g. , , , , and more, who sang 's song "Sivas Ellerinde Sazim Calinir", the tragic and much-condemned incident has been a turnpoint in Turkish political history, with the Government taking a harder stance against religious fanaticism, militant Islam, and antisecularism. There was a national campaign in late 2006 to convert the hotel into a museum to commemorate the tragedy, carried out by the Cultural Institute itself, the outcome of which is yet to be determined.

A cultural hub as well as an industrial one, Sivas features many monuments of 13th-century architecture. "Mavi Medrese" from 1271, si from 1218 and the "Çifte Minare Medresesi" from 1271 with its intricately carved facade and minarets are among the most noteworthy edifices. The oldest mosque is the Great Mosque dating from the Turkmen era. Near Sivas lay the Armenian Christian monastery of the Holy Cross, with its royal throne and other relics. It is now entirely destroyed.

"Ulu Camii" (Mosque) completed in 1196, is famous for its simplicity and it is a showcase for the Seljuk Turks' architectural success. The city is also famous for its "Medrese"s (Madrasa). "Gök Medresesi" (the Celestial Madrasa) and "Mavi Medrese" were built in 1271. On the other hand, was completed earlier, in the eve of the second wave of Turkic immigration to Anatolia, in 1218 and the with its intricately carved facade and minarets are among the most noteworthy edifices carries on the traditional Seljuk Medrese plan.

The city also contains some of the finest examples of the Ottoman architectural style. "Kurşunlu Hamamı" (Bath) which was completed in 1576, is the largest bath in the city and it contains many details from the classical Ottoman bath building. "Behrampaşa Hanı" (Caravansaray), was completed in 1573 and it is famous for its lion motives around its windows.

"Atatürk Kongre ve Etnografya Müzesi" (Atatürk Congress and Ethnography Museum) is a museum that is dedicated to the Sivas Congress and the ethnographic pieces special to the region.

Sivas is also famous for its thermal springs which have a respectable percentage in the city's income. People believe that the water of these thermal springs can cure many illnesses. The most famous thermal areas are, "Sıcak Çermik", "Soğuk Çermik" and "Kangal Balıklı Kaplıca".