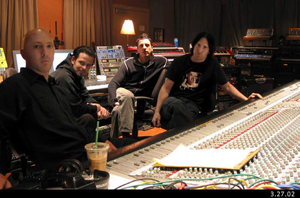 Tapeworm is a defunct of which existed in various forms from 1995 to roughly 2004. Tapeworm never released any recordings, but was frequently referenced in interviews. The band started as a side-project between Nine Inch Nails frontman and live-band members and . Through the years the group expanded and evolved numerous times to include artists such as , , and , effectively turning the project into a supergroup. After many years of rumors and expected release dates, Reznor announced the end of the project in 2004. The only Tapeworm material to be released in any form was through Keenan's project , in which the unreleased track "Vacant" was performed and eventually released as "Passive".

As time went on, Tapeworm evolved into a supergroup, with guest musicians such as , , and recording material ostensibly to be used by the group. In 1999 Lohner reported that three tracks had been completed, and described the various materials featuring Anselmo as "heavy NIN-meets-Pantera" and "mellow ""-type songs", and the material featuring Keenan as "psychedelic, groove-oriented verses and anthemic choruses." [cite journal
title = Nin, Tool and Pantera men team up in Tapeworm. But will we ever hear it?
publisher = ""
month = December | year = 1999]
recorded material with the band as well, and later told "" that the continued delays on Tapeworm contributed to his decision to take a hiatus from music, as well as accusing Reznor of giving his Tapeworm guitar contribution to . [cite news
url = http://www.rollingstone.com/artists/prong/articles/story/5937169/prong_rise_again_on_scorpio
title = Prong Rise Again on "Scorpio"
author = Kirk Miller
publisher = ""
date =
accessdate = 2007-05-21]

In a statement issued to , Reznor reflected on his collaborations with Keenan:

"It has been an interesting experiment for Maynard and I to peek around in each other's heads, shining flashlights in some shadowy corners…We've realized we're each in somewhat similar places in our respective lives and outlook, so it's been great to collaborate on that level."

By 2001, long-time Nine Inch Nails collaborator had tracked "more than an album's worth" of demos. Moulder further described the rough tracks as "very unlike "" and were a deviation from most Nine Inch Nails material.

In September 2003, Lohner told "" magazine that the album was "ready to mix" but had been held up by legal issues stemming from conflicts between Reznor and Keenan's record labels. [cite web
title = NINE INCH NAILS' DANNY LOHNER Comments On TAPEWORM Project
publisher = "Kerrang!"
date =
url = http://www.roadrunnerrecords.com/blabbermouth.net/news.aspx?mode=Article&newsitemID=15526
accessdate = 2008-02-16] The Tapeworm material was reported numerous times as completion neared, most notably by and "", and was slated to be released on Reznor's label. Initial recording sessions for the band were staged in the Nothing Studios in New Orleans, though were later reported as being moved to Southern Tracks Studios in Atlanta, Georgia.

In 2004, Reznor announced that Tapeworm was "dead for the foreseeable future", citing label issues, Keenan's obligations, and Reznor's own waning enthusiasm for the project. Reznor summarized the project's demise by saying "the bottom line is this: if the music had been great, all of this probably could have been worked out."

"Vacant" is the only publicly-performed song to be attributed to the Tapeworm project. It was initially written by Lohner and re-arranged by Clouser, with lyrics and melody by Keenan and chorus and backing vocals by Reznor. The song was first performed live by A Perfect Circle throughout their 2001 tour. Reznor was apparently not happy that Keenan performed the song: "I have to admit I find it mildly irritating for "Vacant" to debut in this fashion before feeling it has been properly realized," Reznor said in a post on the Nine Inch Nails official website. Nonetheless, a remake of the track appeared in a revised form on A Perfect Circle's 2004 cover album "eMOTIVe" under the title "Passive".