People often see hidden faces in things. This is a kind of . When an artist notices that two different things have a similar appearance, and draws or paints a picture making this similarity evident he makes images with double meanings. Many of these images are hidden faces or hidden skulls. These illusionistic pictures present the viewer with a mental choice of two interpretations: head or landscape, head or objects, head or architecture, etc. Both of them are valid, but the viewer sees only one of them and very often he cannot see both interpretations simultaneously.

There are everyday examples of hidden faces, they are "chance images" including faces in the clouds, figures of the and the . Also wrote about them in his notebook: "If you look at walls that are stained or made of different kinds of stones you can think you see in them certain picturesque views of mountains, rivers, rocks, trees, plains, broad valleys, and hills of different shapes. You can also find in them battles and rapidly moving figures, strange faces and costumes, as well as an infinite number of things." collected and published a lot of photos of "chance faces". 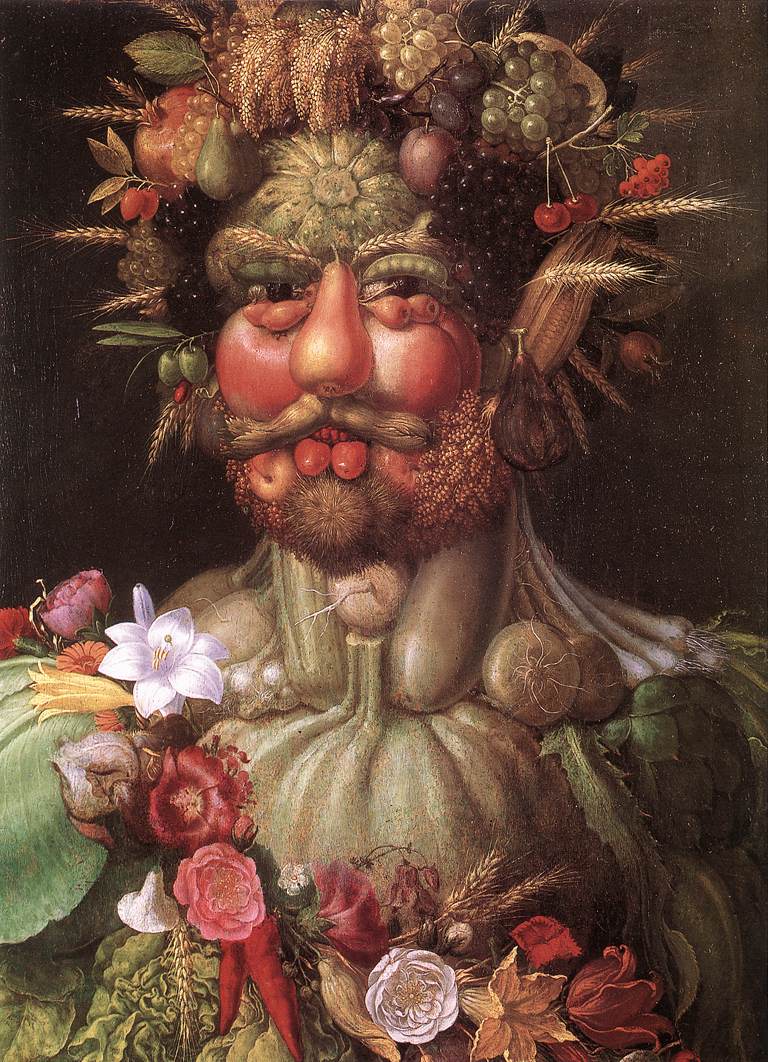 150px|right|thumb|: Portrait of Rudolf II (1590 -1591)] The Mannerist master at the 16th-century imperial Hapsburg courts of Vienna and Prague, of was probably the best known artist for creating extraordinary hidden faces. He arranged flowers, vegetables, fruits, shells, scallops and other animals, books and different things on the canvas in such a way that the whole collection of objects formed a portrait. His series of The Four Seasons seems to be the first use of this approach and technique. Arcimboldo's composite heads were celebrated and imitated by his contemporaries but they were relatively forgotten until participants in the twentieth-century art movements rediscovered them, bringing them to the attention of art historians. He is considered as forerunner of and .

Some other famous and artists created hidden faces like

was fascinated by the technique of Arcimboldo and his paranoia-critical method was influenced by the painter. For Dalí the Arcimboldo effect was form of self concealment as well as this exhibitionist painter seemed, all throughout his life of constant posturing, to hide his real self behind the gaudy externals of his behaviour. Larvatus prodeo, "I wear a mask," he could have said with Descartes and he used this quotation from the French philosopher for the epigraph of his novel . Probably his most famous "hidden face" is in his oil painting: Slave Market with the Disappearing Bust of Voltaire [ Salvador Dalí: Slave Market with the Disappearing Bust of Voltaire [http://psyc.queensu.ca/~psyc382/daliSlavemarket.html] ] Other painters rediscovered the technique of hidden faces in the first part of 20th century:
*
*

tries to combine the technique of with the hidden faces. Anamorphosis is used for those works of art that were made as distorted and unrecognizable through clever geometrical constructions. But when viewed from a certain point, or through a reflecting object placed upon it, the hidden image appears in its true shape, that is, it goes through retransformation. Orosz made experiments with anamorphosises not only in resurrecting the old technique but to improve and develop it. Instead of having a meaningless distorted image, his intent is to bring sense to the basic anamorphic picture, giving it meaning in itself with its second reading being revealed by viewing it from a different viewpoint such as looking at it through a special mirror. [ Anamorphosis with double meanings: landscape and portrait of Jules Verne in the mirror cylinder [http://www.gallery-diabolus.com/gallery/upload/utisz/Verne00.jpg] ] The ambiguous layers coming up by this approach make use of the connection or contrast of the two images within the same picture being independent from each other. [ Anamorphosis with double meanings: a theatre and portrait of William Shakespeare. (View from a narrow angle!) [http://www.gallery-diabolus.com/gallery/upload/utisz/shakespeareszinhaz.jpg] ] There are many other contemporary works using hidden faces:
*
*
*
*