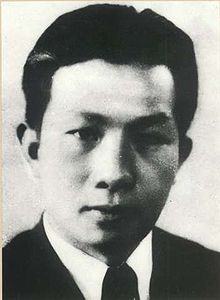 Nie Er's ancestors were from Yuxi, Yunnan, in southwest China. He was born in Kunming, Yunnan. From an early age Nie Er displayed an interest in music. From 1918 he studied at the Kunming Normal School's Associated Primary School. In his spare time, he learnt to play traditional instruments such as the dizi, erhu, sanxian, and yueqin, and became the conductor of the school's Children's Orchestra. In 1922 he entered the Private Qiushi Primary School (Senior Section), and in 1925 entered Yunnan Provincial Number One Combined Middle School.

In June 1931, Nie Er entered the "Mingyue Musical Drama Society" as a violinist. In July 1932 he published A Short Treatise on Chinese Song and Dance, in which he criticised the Drama Society's president, Li Jinhui, as a result of which he was forced to leave the society. Prior to joining the Lianhua Film Studio on November 1932, he took part in shaping the Bright Moonlight Song and Dance Troupe. He later joined the musical group of the "Friends of the Soviet Union Society". He also organised the "Chinese Contemporary Music Research Group", which participated in the Leftist Dramatist's Union. In 1933, Nie Er joined the Communist Party of China.

In April 1934, Nie Er joined the Baak Doi record company and managed the musical section. In the same year he founded the Pathé National Orchestra. This was a prolific year for Nie Er in terms of musical output. In January 1935 Nie Er became the director of the musical department of Lianhua Number Two Studio.

In April 1935, Nie Er went to Japan to meet his elder brother in Tokyo. There, he composed the March of the Volunteers, which would soon become the national anthem of China.

On July 17, 1935, he possibly drowned while swimming in Fujisawa, Kanagawa, Japan, at the age of twenty-three. He may have been en route to the Soviet Union, passing through Japan to receive training, sent by the Chinese Communist Party. Some suspect that he was killed by Japanese right-wing radicals. Others suspect that he was killed by Chinese Nationalists, as he was in Japan to flee from them. However, as he disappeared while swimming with his friends, killing him was difficult, and swimming in mid-July is a bit early, so he most likely drowned. He was found by the local rescue team the following day. According to them and the police, the condition from his body was not different from that of ordinary drowned bodies.

Nie Er wrote a total of 37 pieces in his life, all in the two years before his death. A significant proportion of these songs reflected working class life and struggles. He often collaborated with lyricist Tian Han.

Apart from March of the Volunteers, his other important works include: