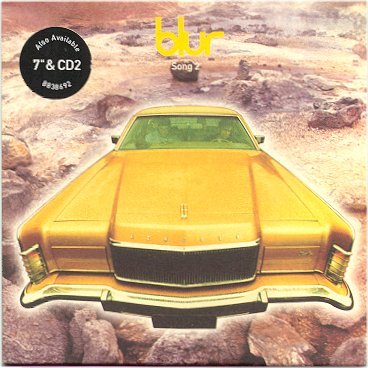 "Song 2" is a song by Blur, and the second single released from their fifth album "Blur" in April 1997. The track, known for its overdriven chorus, is among the most well-known songs the band has recorded, particularly in the United States, where it remains their biggest hit to date. It is also known as the "woohoo song".

stated at the song's debut live performance at the RDS in in that "This one's called 'Song 2', 'cos we haven't got a name for it yet". The working title ended up sticking. Coincidences surrounding the number two eventually became associated with the song: it was the second track on the album, was the second single from the album to be released, and reached #2 in the , is exactly two minutes and two seconds long, and is also the second track on their compilation "". It also placed #2 on 's for 1997 in Australia.

In the UK, "Song 2" built upon the success of Blur's prior #1 single "", reaching, fittingly enough, #2 in the charts. It was also the band's biggest hit in the USA, reaching #6 on 's . Though it is decidedly atypical of Blur's trademark style, in America it is the song most closely associated with the band.

The song became quite popular upon its release in 1997 on college and radio stations in the USA. Due to its catchy chorus, mainly the word "Woohoo", it has been licensed worldwide on numerous occasions. Its first and most notable appearance came as the title music for the hit video game . It has been used in numerous advertisements, including commercials for the , the Nissan Sentra, television spots for the film "Starship Troopers", and is often heard in , , and stadiums when goals or runs are scored. For one season, the of the played this song every time they scored a goal in a home game. The 's play the song each time a run is scored while one of their mascots, Mr. Celery, dances on the field. [ [http://www.bluerocks.com/mascots.php] Wilmington Blue Rocks] It is also played by the National Football League's whenever a field goal is scored during home games at . The song also gained recognition in Canada, as the theme for the . Famously, the American military requested to use the track at the launch of a new stealth bomber [ [http://www.nettime.org/Lists-Archives/nettime-l-9905/msg00287.html] - Strange News From Another Star ] , but the band refused to allow this, as Albarn is an anti-war campaigner. [ [http://www.guardian.co.uk/antiwar/story/0,,1188725,00.html Britpop rebel with a cause says no new nukes] - The Guardian] [ [http://www.nme.com/news/103389.htm Massive Effort!] - nme.com] The song also features in the Episode "Stanley's Cup" (Season 10, Episode 14) of the sitcom South Park.The song is also played right outside in ,.the video is featured in the game,"".

The video for this song was directed by , and it features the band playing in a small, secluded room with loud speakers behind them. During the choruses a strong wind seems to blow in the room.

This video bears striking resemblances to Blur's video for .

The song has been covered by a number of artists, including:
*During live performances by American bands , and .
* recorded a version which is on the compilation .
*Neo-Nazi band Kremator does a cover called Song 88.
*AFI covered the song as the traditional first song of MTV's 2007 New Years special.
* for , and again for the 'NME Awards 2008 Compilation'.
*British rapper Plan B covers the song during his live performance, adding in his own rapping verse before the first proper verse of the song.
*French bands and covered the song during Taratata (TV). You can also find a concert performance on their live DVD's: "Y'a-t-il quelqu'un ici" from Louise Attaque and "Monsters in Live" from Dionysos
* sampled the songs with his dance songs S.M.D.U.
*The German Punk Band played this song on their 2005 concert "Heimspiel" in Düsseldorf.
*By , and Craig Wood In An 's Show.
*By on his 2002 CD
* frequently cover this song live

Song 2 has been featured in various media outlets across the globe, including: a advertisement in ; the Scottish Indie film "Fast Food;" the video game; a short film "Star" featuring & ; the episode "Kiss Kiss Bang Bang"; and the episode .