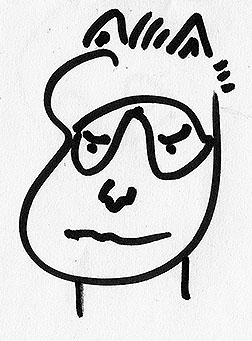 Alfred Breitman is an Italian artist of origin, born in the late 1950s. He has put on shows and performances in and abroad covering , , , , design, and , as well as and traditional .

In 1975 the painter Mario Schifano introduced Breitman to the American artist in Milan. During a brainstorming session with other young artists, the "Pop Art Crisis" project was conceived, which proposed inserting cultural and social values into pop imagery. Breitman has often worked with the marketing departments of major firms, creating pop images capable of reaching the public, not only in art galleries, but also from shop windows and through major retailers. Gatto cinese (Chinese Cat) and Slot Machines for Hoover; Stelle Virtuali (Virtual Stars) for IBM; Icone Pop (Pop Icons) for Schering-Plough etc. In the 1980s he met the master of graffiti art at Fiorucci in Milan and created with him a series of "Surfers", continuing with the project of restoring to art its role as an example for society. Again in the 1980s Breitman came up with a new notion in performance art, convincing a number of famous poets (among them and Dario Bellezza) to create graphic images. This led to the creation of contemporary works like Gatto Beat (Beat Cat) and Scatola della Poesia (Poetry Box).

In the 1980s and 1990s Breitman continued the " and I: the Pop Art Crisis" project, creating powerful and sometimes upsetting images, images that were linked to minorities and human rights. Breitman’s works seek to inspire the public to oppose discrimination. Some of the artist’s output touches on delicate subjects such as , , and .

Alfred Breitman has been involved in making films and documentaries. He created the series "Il genio in 100 ritratti" (“A Hundred Portraits Of Genius”), in celebration of the artists who changed the course of art history. He was the first land artist to bring crop circles to Italy, creating a number of examples of the form invented by the British artists Doug & Dave. He has collaborated with well-known circle makers from the UK. He was one of the earliest artists to display and sell his works on the internet, by means of virtual galleries. A peace artist, Breitman was the last Western artist invited to put on a show in Iran, prior to 9/11. The show, which centred on peace, was cancelled following the attack on the . Breitman was among the first artists to take part in the famous show "Self-Haters Unite!" against historical revisionism and . He is involved in the discovery and recovery of artists from oppressed peoples throughout history.