A melee weapon (from French mêlée, mixed, referring to groups of fighters interlocked in close combat) is any weapon that does not involve a projectile — that is, both the user and target of the weapon are in contact with it simultaneously in normal use. A weapon that fires a projectile, or is a projectile itself, is a ranged weapon.

As such melee weapons do not include statically emplaced weapons, like a boobytrap or burning devices, but are carried. A melee weapon is a type of "cold weapon".

There are two basic divisions — edged weapons, of which examples include swords, spears, axes and knives and blunt weapons, such as clubs and maces.

The basic principle of edged weapons is to increase the user's pressure by concentrating force applied onto a smaller surface area, such as an edge or point, thus more easily penetrating the opponent's body to cause wounds. Because most of the effectiveness of edged weapons depends upon breaking the skin of an opponent, they lose much of their usefulness when pitted against armour.

Blunt weapons on the other hand rely mostly on mass and raw impact energy to disable opponents through broken bones, internal trauma or concussions. Generally they are used in some sort of swinging motion to charge kinetic energy into the weapon's mass.

Historically, maces and flails were developed and used to combat armoured infantry, such as knights, because of their ability to cause injuries even "through" plate armour, and were also very effective against flexible armour, such as mail. However, blunt weapons are usually heavier than edged weapons, as the extra weight is needed to cause greater damage, especially through armour. This often makes blunt weapons both strenuous to wield and difficult to maneuver.

Most melee weapons live within the spectrum from very lightweight blades or spikes to extremely heavy, blunt poles. Heavy cavalry swords are perhaps about midway along the range in both kinetic energy and concentration of pressure, and showcase how any point in the spectrum can sometimes yield an effective weapon.

People have always had weapons for a variety of reasons, whether it be for hunting or attacking. What is considered probably the earliest way to craft weapons was for a hard stone such as flint to be chipped away until it met the desired shape, often a point or cutting edge. At first these weapons were held directly in the hand, until the discovery of the haft or handle which allowed more force to be applied to the weapon. This allowed it to do more harm on both the battlefield or on the hunt.[1] Hand axes were often polished so that the user needn’t hurt his hand when hitting something. Although the blade of the axe was often left unpolished as the rougher edge was the more effective. A picture of an ancient hand axe is below. The stone weapons used during the last parts of the stone age and into the bronze age do exhibit a little more artistic craftsmanship. For example they were often finely polished and chipped in a shape that would be considered pleasing to the eye. 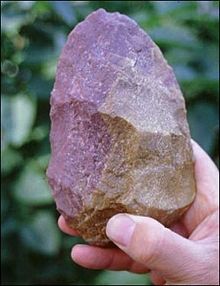 Another ancient way of crafting weapons was first discovered in southern Africa. Natives found that by heating a certain stone called silcrete they could chip it away and create more sophisticated knives, axes, and other weapons. Scientists speculate although that these weapons were not improved though by the fire, but were actually more likely to shatter. In fact Stony Brook's Shea says 'Instead the flashy artifacts might have been ways that "some humans showed off that they had time on their hands," '. This is very much like the swords worn by kings in Europe.[2]

The discovery of metals like bronze and copper changed the way weapons were made completely. These weapons were stronger and more ornate than their predecessors in the Stone age. During the beginning of the Bronze age the metal head of the weapons were still bound to the shafts of the weapons. Later the weapons were secured more securely with sockets and pins.[1] This age started roughly 3500 B.C.. It showed the beginning of the use of the technology that allowed tin, copper, and zinc alloys to be mixed to produce the metal bronze. This metal was very durable and strong and it got stronger the hotter it was heated.[3]

The Iron Age which started around 1200 B.C. marked the beginning of the use of iron for the majority of use for weapons and armor.[3]

The most common stone used for making weapons was silex (otherwise known as flint). This stone was hard enough to withstand the pressure that was exerted on it, while it was still workable into the shape that the worker wished it to be. The working of stone was a fine art that man did a great job of mastering. When creating a weapon a craftsman would choose a stone that was close to the shape desired by the craftsman. Then a second stone was used to repeatedly strike the stone in a single area causing splinters to chip away from the stone. The difficult part about this skill was that when the splinters flew from the stone they came from the side of the stone opposite to where the blows were struck, not from the place of initial impact. This then complicated the matters a little bit because the workman could not see exactly where he was working and had to rely on feeling. This skill of feeling the shape of the stone and knowing precisely where to strike it was an extraordinary skill.[3]

Heating metal and then hammering it into the desired shape, along with rapidly cooling it, was how the metal bronze was forged. These bronze weapons were much better than the stone ones of the same type, although these were more difficult to make and procure. The same basic techniques were used with iron during that age to great reward. Iron proved to be stronger and even more reliable than bronze, making it the metal of choice in later years. A picture of a bronze sickle sword and an iron axe are featured to the right. 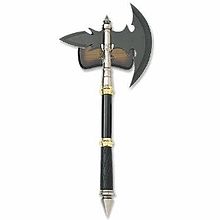 One of the greatest advancements in melee weapon technology was the Damascus steel forged by the Muslims during the Crusades against King Richard the Lionheart and other Christian kings (1095–1270). In the book The Talisman by Sir Walter Scott, a picture is painted of King Richard with a broadsword pitted against an Islamic nobleman with a scimitar crafted of Damascus steel. In this comparison the scimitar is looked at as an equal or even a superior to the broadsword despite its more slender and seemingly weaker appearance. The reason for its comparison is that the scimitar is made of Damascus steel, a man forged metal that had a dark watery appearance to it. The secret of creating this metal could not be replicated by European smiths, though many tried. After the Crusades even the Islamic smiths lost the secret to its creation. Many scholars accredit the modern study of materials science as springing from the search for this lost secret.[4]