Maakhir was a self-proclaimed state that formally represented the political will of ethnic Warsangali-Darod from the North and South in federal Somalia.[citation needed] It is the indigenous territory of the Warsangali, a member of the Harti confederation of clans (along with the Dhulbahante and Majeerteen) of the Darod. The Warsangali were originally one of the principal actors in the creation of the Puntland State as a successor to the Harti Sultanates after the collapse of the central government in Somalia in 1991. However, since the proclamation of an autonomous Puntland in 1998, the Warsangali have been increasingly sidelined as the Majeerteen clan has assumed a hegemonic role in the state.[2] Maakhir was brought back into the Puntland fold by General Abdullahi Ahmed Jama ‘Ilkajir’ , who contested the Puntland election. General Ilkajir became the de-facto leader of Maakhir following the dissolution of the Maakhir administration.

Maakhir State proclaimed autonomy at a 1 July 2007 ceremony in Badhan in response to overlapping claims of both Somaliland and Puntland over the western Sanaag and western Bari, both of which have led to several gun battles over control of the territory between Somaliland and Puntland.[3] Puntland and Somaliland have both signed oil concessions in this part of Sanaag,[4] without the consent of the local leadership,[5] which also contributed to the desire of the local Warsangali to administer their own affairs, as well as resolve disputes with Mohamud Muse Hersi, the former President of Puntland.[6] In addition to most of Sanaag.

Maakhir's form of self-governance like Puntland rested on the building block model of Federal Somalia—endorsed by the International community, a bottom-up approach of reconstituting the Somali Republic. This self-governing model which mandates a decentralized local levelof government in Somalia is seen as a workable long-term political strategy in resolving inter-tribal conflicts and ending a general disorderliness.

Maakhir built institutions such as civil society, law enforcement, xeer (customary law), and Shariah-based district courts. It also established a local military and naval establishment that protects the region's marine and land resources and which provides safety and access to the flow and supply of humanitarian aid, the normal operation of international and local NGOs, as well as the implementation of UNDP programs. Maakhir's other stated aim was to provide much-needed public services by opening up a treasury office in Badhan, to ensure governance structures for the safety and maintenance of Laasqoray Port, and the protection of private local enterprises whose operational management and ownership fall under the guidance of the private sector of Maakhir state.[7] A third objective was to manage the complex local conflicts by strengthening the already existing traditional mechanisms, which will be consolidated and run by the Department of Justice.

Maakhir sought to structure consensus around peace, internal security, market stability, cooperation and unity of purpose with its neighbors; and build bridges of trust and social harmony across dividing political lines and between opposing interests and groupings.

Neither Somaliland or Puntland ever recognised the state. Despite rumored talks with Ali Mohammed Ghedi, the former Prime Minister of Somalia, the Transitional Federal Government of Somalia declined to comment on the status of Maakhir and regarded Puntland as the official authority of the region.[8]

Maakhir State of Somalia was the descendant of the Sultanate of Mohamoud Ali Shire (Warsangali Sultanate) which is the oldest sultanate in Somalia with a rich history and heritage. The old capital of the Warsangali sultanate was Las Khorey.

The Sultanate of Mohamoud Ali Shire was considered by colonial authorities as having largely hegemonic authority over the other Harti sultanates, and the Warsangali played a large role in 19th century administration of Italian and British Somaliland. As the 20th century began however, the British and Italians ended the independence of the semi-independent Sultanates, and the Harti Confederation was dissolved in the midst of Italian and British rule, ending the traditional role of the Warsangali. Sultan Mohamoud Ali Shireh was exiled to the Seychelles – "the islands to which many prominent anti-colonial leaders used to be exiled".[9]

After independence, the Majeerteen emerged as the leaders of the Harti group following the USP's merger with SYL—active political parties on the eve of Somali independence. The Warsangali have however maintained their preeminent position as the traditional leaders of the Harti. This has challenged Puntland's attempts to assert its authority in Sanaag and western Bari.[10]

The disputes between Maakhir and Puntland had centered around ex-Puntland president Adde Musa's exploration deals with Range Resources, a mining and oil corporation registered in Australia and his refusal to recognize Maakhir's declaration of autonomy. Despite intensive gun battles at the border, Puntland state insisted that the territory was part of its sphere of influence. Moreover, Puntland continued to carry on business as usual, when such business was exactly what caused the Declaration of autonomy in the first place.

Conflicts with Puntland over charcoal

Maakhir banned charcoal production due to the desertification it causes to the fragile Somali environment. Puntland had ignored the ban and sent several expeditions into Maakhir, with Puntland militia protecting the charcoal traders. Clashes between Puntland militias escorting charcoal traders and Maakhir militias attempting to stop charcoal production had occurred numerous times since the ban, in Mijayahan,[11] Wa'iye and Sarmanyo.[12]

Puntland maintained its public statement that it did not recognize Maakhir.[13] The demand for charcoal from Arab states of the Persian Gulf, sometimes referred to as the "Black Gem" due to its profitability, has fueled the clashes.

In order to contain the charcoal expeditions, most of which are heavily armed and backed by big business interests, the Maakhir authority created a volunteer patrol force, the "Environmental Protection Corps".[14]

A dispute with Puntland over the arrest of prominent Warsangeli businessmen from Bosaso prompted the Maakhir government to blockade the highway to Bosaso until the men were released.[15]

On February 25–26, 2008, a Somaliland-aligned, well armed force laid siege to Hadaftimo, causing a brief state of emergency before the force withdrew back to western Erigavo. Maakhir authority responded with a military buildup in the Maakhir-controlled part of Erigavo.[citation needed]

Hostilities re-emerged on July 9, 2008, when Somaliland invaded and occupied Laas Qoray port for few hours, under the pretext of a rescue mission (German citizens were allegedly being held hostage in Laas Qoray by pirates).[16]

In January 2009, Maakhir was officially incorporated into Puntland.[1] 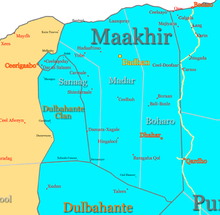 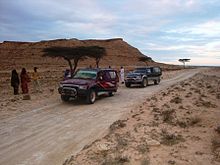 The disputed status between Puntland and Somaliland has also meant that Sanaag as a whole may not have received all the available and apportioned aid from UN non-governmental organizations (NGO)s and aid agencies. The newly established Maakhir government has made this issue one of their first priorities, and appealed to the Warsangali Diaspora for assistance.[17]

Due to drought conditions, administrative problems and threats of invasion from Somaliland, the government of Maakhir was dissolved on the 6th of April 2008 by governmental and presidential decree. President Jibril promised a new government by June 2008, but Warsangelis decided instead to rally behind the campaign to elect General Ilkajir as President of Puntland. By the swearing in of the new president of Puntland, Abdirahman Mohamud Farole, Maakhir had fully rejoined Puntland.

The two branches of government in Maakhir (the Parliament and the Executive) were led by:

Former President Salad has appointed seven people to his cabinet on the 4 August 2007,[18] Mr. Ahmed Sheikh Salah resigned from cabinet due to health reasons, and four more secretaries were added on September 8, 2007, then another seven on September 8, 2007[19] establishing the following State Secretaries (called Xoghayaashan in Somali):

The Parliament of Maakhir had 38 members.[20]

Maakhir had received legitimate political support from Asha Abdalla, who represented Sanaag in the Transitional Federal Parliament.[21] The state was never formally recognized by the TFG as a whole.